A View From The Road Volume 12, Number 3

Greetings from Las Vegas and the National Association of Broadcasters conference.  I was only able to stop by this conference for a short period of time – and as such this is just a brief taste of what happened at the conference - but the visit was enough to get a sense of what is going on in technology in the broadcast industry.  The conference this year was really a tale of two cities. 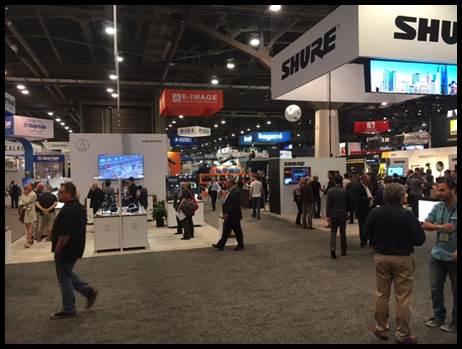 The city on the left is the broadcasting of old.  Its microphones, cameras, intercoms….you know, hardware.  The city on the right is cloud services, telecom services, editing and distribution packages…you know, software.  There is hardly any traffic in the central hall where most of the hardware vendors are, and there is essentially no room to move in the south hall where most of the software vendors are.  The hardware exhibitors I spoke with were actually quite angry about it, feeling that the segregation of the two areas isn’t helping anyone.  The hardware manufacturers get very little of the walk-up traffic, and the software / cloud areas are too crowded to move.  Some have also suggested that it’s really two different specialties and should be two conferences.  I’m not sure I agree with that, but there is clearly a trend here (as in all technology) to minimize the hardware and optimize the software – and it shows pretty obviously at this event.   A conference that was once dominated by the likes of Sony, Panasonic, Cannon, Fujinon, Etc. – showing real technology being demonstrated - is now dominated by Amazon Web Services, Verizon, Google, Facebook, Cisco, Microsoft, etc.  – showing content and ecosystem demos on video displays in their booths.  With a few exceptions, the booths are getting smaller as the cost basis for having one is no longer based upon the sale of five and six figure hardware packages.  Exhibitors, mostly relying now on subscription revenue, simply can’t afford huge booths that are no longer cost justified.

However, beyond just the ‘two city’ divide, the other big reality at NAB this year was nothing…literally, almost nothing new to talk about.

Sure there were the typical many flavors of HDR (High Dynamic Range) with firms extoling the virtues of capturing HDR content – but it’s still a wild-west of options for monitoring it, measuring it, and editing content shot with it.  And no one has developed a process where consumer displays can take HDR in one flavor and then rapidly switch to HDR in another flavor without going haywire.   But that was known before coming to the show.

Also, there were a handful of new and cool devices – like updated DSLRs, cloud services, portable lighting and a nice new version of the Padcaster (which I’ll get to) but nothing really earth shattering to write home about.

Nearby parking lots that used to be 1) full by 9am and 2) charging for parking were still half empty by noon.  No one was charging for parking.  Maybe some of that is due to the ride sharing phenomenon, but not all of it, as rideshare cars should still have filled the streets as the show let out, but actual traffic wasn’t a problem.  There is simply less interest in this conference than in years past.  A few years ago the NAB changed the focus of this show from what was historically, primarily a technology event to one that had a greater focus on ‘content and experiences.’  “The MET Effect” they call it, short for Media, Entertainment, and Technology.  I suppose it sounded like a good strategy to the association that runs the conference, but clearly the focus away from technology was not something the majority of attendees have appreciated.  It seems that trade associations see “content” as a boondoggle for technology conferences, ostensibly attracting a higher level of executives willing to pay more for fluffy sessions.  Actual conference attendees seem to really prefer updates on the technologies they are dealing with, and want to learn how to adapt to a changing industry.  When the associations don’t recognize who the base of their conference attendees are, the results are what we have here – lighter attendance, smaller booths, less interest.  It’s a relevant example for associations of what not to do to grow their industry.

With no major announcements, no leaps in technology, smaller booths, and lighter attendees – NAB 2018 was really a “nothing-burger” as one of my fellow analysts called it over dinner.

There were two new devices that I saw that seemed really cool and useful.

The team at PadCaster showed their latest iPad production rig, including a new mini TelePrompTer based upon an iPod touch: 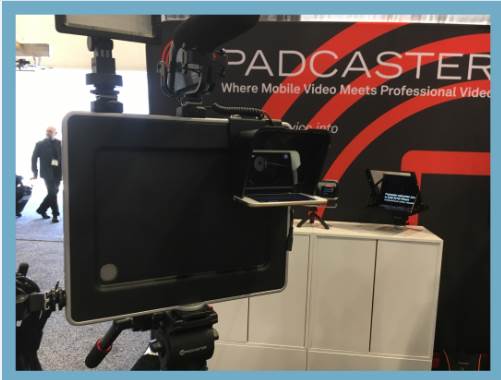 It is an excellent implementation of modern, inexpensive technology to effectively meet traditional EFP needs. 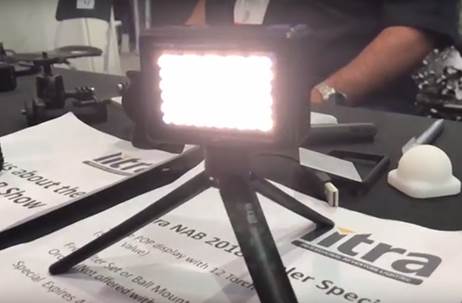 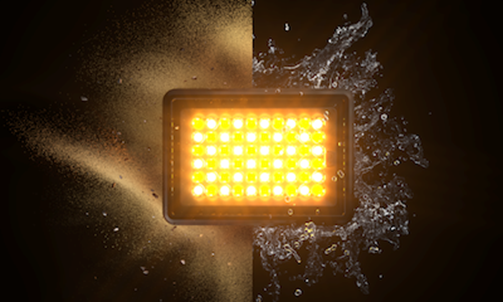 With availability later this year, it is one of the first battery operated compact LED light panels that supports tungsten and daylight tempratures, provides 1000 lumens, will work up to ten hours on a charge, and/or will work on continuous external power.  More details of the the instrument can be seen on their press release.

There wre also a number of small, incremental improvements in camera technology shown on the exhibit floor.  Google was showing off the Lytro light-field camera, Altia Systems was previewing some fabulous advancements in its Panacast2 camera (that will be released at InfoComm), and a number of “pro-sumer” brands were trying to make an impact in “broadcasting” by showing their products in the context of ‘bargian prices for broadcast quality.

That’s it for my brief visit to NAB 2018!  Look for my next bog from InfoComm 2018 in June.  I’m excited to be deeply involved in the authoring and coordination of that conference, as we’re planning a powerful UC track, and an amazing Emerging Trends Day  that will include honoring (and hearing from) some real industry superstars as this year’s group of Emerging Technology Fellows.  We’ll have Jim Lundy on the Digital Workplace, Florian Rotberg on Displays and Digital Signage, Pete Putman on Media Signal Distribution, Evan Kristel on Sensors and Tracking, Paul Erickson on Live Experience Technology, Steve Koenig on Consumer Trends and Brands in the Enterprise Space, Roopam Jain on Collaboration and Huddle Rooms, David Maldow on AV as a Service– and (coming out of retirement for one last appearance) Andrew Davis on the Evolution and Revolution of the Collaboration Camera.  It’s an awesome line-up! I hope everyone attending InfoComm18 can be there a day early on Tuesday June 5th – the day before the conference starts.  Come joins us as we swim against the tide - focusing on the technology and environmental changes in our industry that you really do need to know.

This article was written by David Danto and contains solely his own, personal opinions. David has over three decades of experience providing problem solving leadership and innovation in media and unified communications technologies for various firms in the corporate, broadcasting and academic worlds including AT&T, Bloomberg LP, FNN, Morgan Stanley, NYU, Lehman Brothers and JP Morgan Chase. He now works as an analyst and consultant in the collaboration, multimedia, video and AV disciplines. He is also the IMCCA’s Director of Emerging Technology. David can be reached at DDanto@imcca.org and his full bio and other blogs and articles can be seen at Danto.info.  Please reach-out to David if you would like to discuss how he can help your organization solve problems, develop a future-proof collaboration strategy for internal use, or if you would like his help developing solid, user-focused go-to-market strategies for your collaboration product or service.