Random thoughts in my own, personal opinion

End Of Summer Rants and Raves

“The sun has started to set on the summer of 2018 – and it has been an interesting summer to say the least.” For the first time since my wife and I had kids we didn’t take a traditional “family summer vacation.”  The fact that our boys wanted to do their own thing as young adults, combined with the reality that she just started a new job, led us to opt for a number of smaller getaways between now and the end of the year.  That has given me a lot of time to reflect on ‘Life, the Universe and Everything’ (at least 42 times this summer.)   Below are the Deep Thoughts I’ve come up with – some travel related, some not….

·       It’s hard to believe that until now we’ve lived in a world where one couldn’t easily create a selfie in space.  Thankfully that dark era has ended as there is now an app that allows just that.  “This app was developed by the IPAC Communications & Education group and has been released in conjunction with the 15th anniversary of NASA’s Spitzer Space Telescope mission and features a collection of images that showcase its infrared data.”  Go ahead, put your pet’s face in space and post it for your friends.  It will provide some necessary balance to the universe.

·       I find myself wondering what Hawaii has done wrong to deserve the summer it had.  With Kilauea causing all kinds of grief and hurricane Lane now wreaking havoc, this has become the first year when – instead of wishing I was in Hawaii – I’m glad I’m not going this year.  Hawaii however is just the tip of the iceberg.  California has experienced its largest wildfires, massive flooding has hit cities across the US, and powerful thunderstorms and massive heatwaves have rocked the nation.  It makes me remember an episode of the New Twilight Zone – Profile in Silver – where someone goes back in time and saves JFK from being shot, and the planet goes haywire because history has done something it wasn’t supposed to do.  It kind of makes one think…

·       Anyone who’s read my blogs knows I think the state of commercial airline travel in the US sucks, and no airline sucks more than United.  As I covered in the past, United has removed one of their club locations at Newark Airport and replaced it with a Polaris Only lounge.  I knew this was a horrible idea, but when United posted an ad on Facebook boasting about the new ‘international Polaris class only lounge’ their Newark based customers – most 1Ks and Global Services – just massively unloaded on them.  If you have a Facebook account go check out the comments and United’s lame responses.  Their crack PR machine has laid some gems in this thread, including ‘we stopped providing newspapers (other than the WSJ) to spend more money on food’ to which a customer replies ‘what food did they add?  It’s been the same corn salsa and cheese cubes for years.’  It’s really worth a read to get a sense of what United’s best customers think of them. 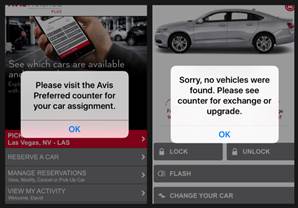 Does anyone know what happened to Avis?  I realize that most of the car rental companies are now owned by only a couple of firms, but man, has their service declined.  I tried them a number of times this year at the request of some travel guidelines, but after receiving dirty, non-functional cars, waiting on huge lines at the preferred counter, and having their app ping me to ‘choose and swap for whatever car I wanted in the app’ whenever I got to a city, only to have it respond ‘there are no cars’ or ‘please visit the counter’ I finally bailed and went back to National.

·       And as long as I’m asking my readers for info, does anyone know why I suddenly can’t buy a Bosc pear at any grocery store?  They used to be available year-round, now they’ve been gone for over a month.  I used to eat at least one daily and now I’m in pear withdrawal.

·       To round out the group asks, does anyone know what has happened with men’s cotton socks? I was running low on white cotton crew socks because my kids steal them from my sock drawer, so my wife bought me a Hanes multi-pack.  What came home were thin, fragile, mostly spandex versions masquerading as the cotton socks I’ve used for many decades.  I did a quick search on Amazon, and to my horror, discovered comments that indicate this is now a thing – the disappearance of the men’s cotton sock.  One reviewer posted a manifesto:

“I'm not certain why I'm adding my voice to the chorus of disappointed buyers posted here. One more 1-star review probably won't make much difference because people will continue to buy these socks. And why, you may ask, would people go against all the poor reviews? Are they just stupid? No. They're not. The fact is that they have no choice. Read all the reviews here of men's crew and boot socks and you will find numerous 1-star reviews of EVERY DARN SOCK BEING SOLD. All of the men's cotton socks listed on Amazon have multitudes of disappointed buyers. Apparently all cotton crew socks now being made are thinner, flimsier, wear less well, fit poorly and just plain suck. So if you want to buy some here, you just have to flip a coin and take your chances with the offerings listed. I chose these and now after wearing one pair twice, they are developing holes in the heels. Did I mention that I haven't even gone out of the house in them? Did I mention that I only wear them in the house with sandals? No, they have never seen the inside of a boot and yet they are starting to give up the ghost. I wear a size 10 shoe, but these stupid one-size-fits-all have the grey heel halfway up my Achilles. Am I surprised at how bad they are? NO. I read the reviews first and took a chance. Since about 85% of everything made now is less sturdy, less reliable, less functional, poorly designed, and made in some foreign place with poor materials, but costing twice as much as 10 years ago, I wasn't surprised. Maybe I'll cut them up and use as Kleenex replacements since that venerable product has now deteriorated to the point to where you had better use 4 of them to blow your nose if you don't want a hand full of goo afterward.”

·       Of my many character flaws, the fact that I’m a Mets fan is right up there near the top.  I actually bought into a small ticket plan this year and wagered on them to win it all in March in Las Vegas.  That was two of my more stupid moves of 2018.  Not just the waste of the $20 bet (at 1-2 odds back then mind you) but the buying into the sales pitch that the organization’s management had somehow changed and was now fan-friendly.  I’ve visited stadiums across the USA over my lifetime, and everyone everywhere is treated better than the Mets organizations treats their fans and customers.  I guess I had to dump a few thousand bucks on tickets to find out nothing has changed, on the field or off.  Someone on Twitter posted that “if it weren’t for the disastrous June, the Mets would be having a decent year” to which someone else replied “if it weren’t for the Iceberg, the Titanic would have had a terrific maiden voyage.”   I can’t provide a better analogy than that.  Here comes football season.

·       This is the time of year I fondly remember experiencing the fall season – clean, crisp air, the smell of school supplies, the turning of the leaves, etc.  Honestly, I can’t remember the last time I’ve experienced that here in the NY/NJ area.  We tend to go almost directly from needing the air-conditioning to needing the heat.  The middle seasons have disappeared.  If someone finds autumn, please call the number on the milk-carton and report it.

Four more months till the end of the year.  Have we all re-qualified for our airline and hotel elite levels?  Does anyone care anymore?