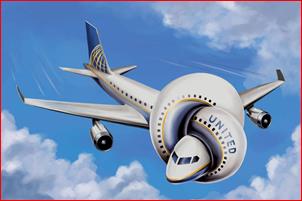 “Sometimes even I get sick and tired of what I write about. As a “Newark Hub Captive” I do most of my flying on United Airlines.  It’s far too expensive to travel to JFK or LGA on a regular basis, and being a 15 minute ride from EWR, nothing else really makes sense.  In today’s travel world most airlines provide lousy experiences, and United – the prime carrier for non-stop flights at EWR – is far closer to the bottom than the top.  (In fact, United made the list of the top 20 most hated companies in America, just below the Weinstein Company – so you know it’s not only my opinion.)  Unfortunately here’s another story of how they screwed this million miler in yet a new and novel way (they apparently have no limit to finding new ways.)

If you are a traveler alive today (and/or if you’ve read my recent blogs) then you are well aware of how volatile the current business travel situation is.  Any plans that were made for this late summer / early autumn season are in jeopardy due to the COVID19 Delta Variant.  My travel this week was to take me to LAS for a 4 day leisure trip with my wife, then on to IND for a business conference.  I was beginning to doubt that the business conference would happen, so I protected myself by buying an extra full-fare, fully refundable ticket back to EWR just in case.  As I understood it, that’s exactly what full-fare refundable tickets are for – to give you the option of flying in-case you need to.

Shame on me for buying that potential ticket on United.  What their computer system did is discover I had two tickets to fly on the same day, and without any notice or warning, cancelled me off of the itinerary to IND.  I only happened to notice the segments missing from that record when I was checking the seating charts to see how full the flights were.

I called the Premier desk and asked what happened, and the agent explained I can’t hold two tickets for two different flights at about the same time on the same day.  She was happy to put the segments back, but told me the automated system would just cancel one of them again shortly thereafter.

I see no logic in this automation – just bean counter blinded greed to open seats for sale.  During a pandemic, when everyone needs flexibility and support, all United is doing is forcing me to buy a ticket for one of the back-up routes on an alternate carrier.  (Southwest for example offers a non-stop that flies LAS-IND as opposed to United’s connection through DEN.)  United’s algorithm is putting them in a position to have a 50% chance of revenue from me on that day, vs. a 100% chance of having my business on one of the two routes.  They seem to have forgotten that I and millions of other flyers have told them to take their Ponzi scheme loyalty programs and shove them.  I buy fully refundable tickets on the carrier that has the service I need, and never hesitate to fly any reputable carrier.

I suppose I can understand their motive here – heartless and cruel as it may be, and also totally ignoring the volatility of the current pandemic situation – but I’ll never understand how they can think it’s the right thing to do to simply remove an itinerary’s flight segments without informing the traveler.  If I hadn’t checked on the seating status I’d never have known about the issue.  I could easily have tried to check in for and board a flight that I then had no reservation on.

As it turns out I used the opportunity to completely revamp my travel plans for the week, preserving the options of going home or going on to the conference if it happens.  Some of the business went to United, some didn’t.  Unfortunately the travel is split across three records, so I have to be extra alert for any changes – which ultimately needs to be the lesson learned here.  I’ve explained before (here and updated here) how United and the airline industry in general are made up of lying-liars.  Here’s just another example of how we have to watch them like a hawk if we don’t want to be stranded somewhere.

I need to point out that the photo at the top above is not mine.  It belongs to the Facebook group “United Airlines Sucks.”  I want to give them credit for having the rights to it, but at the same time highlight that there actually is a group with that name (that has nothing to do with me) which has thousands of members.  It’s not hard at all to understand why.