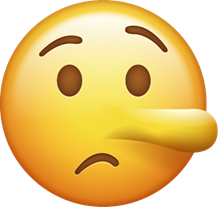 A few years ago I wrote a blog titled Frequent Liars.  It explained how the airlines always lie to us, and that their ongoing deception is sadly part of their DNA.  I pointed out that “It’s not just a lie here or there – it’s a culture of dishonesty that permeates every aspect of the entire industry – and is continued today without shame or embarrassment.  It’s impossible to take a US commercial airline flight today without being lied to at some point during the experience.”  You would think that we’d have steeled ourselves to this phenomenon by now, but we haven’t.  The rare, occasional good flight inevitably gets our hopes up that good flying experiences are possible, only to make the next whammy hurt just that much more.  Here’s a trip report from this past weekend, highlighting the lies and the ensuing misery.

A few weeks ago I found out I had to be in Santa Cruz, California this past Monday.  Complicating that was the fact that I had plans with my family for a Father’s Day celebration on Sunday – so I didn’t have a full travel day available.  My only option was to take the last flight of the day out of EWR to SFO, then drive about an hour to get there.  The last flight – United 210 – has a scheduled departure of 9:59pm Eastern and scheduled landing at 1:18am Pacific.  After the drive and checking in I should have been able to get about four hours of sleep before my meeting.  Not ideal, but under the circumstances it was all I could do.  Then the lies started.

The aircraft scheduled to fly UA 210 was United PS configured 752 (#5318.)  It was coming from SFO to Newark, then after about a two hour turn-around, flying back to SFO.  The problem of course is that it was running about two hours late.  There were runway issues at EWR the day before, and there was some weather, and some issues with the aircraft.  As a result of them all, it wouldn’t land until ~9:54pm.  Now I may not be a math expert, but even I know you don’t land a plane at 9:54 and have it unloaded, cleaned, checked, boarded and have it take off again at 9:59pm.  It was clear I’d be departing late.  Do I blame United for this?  Of course not.  As a traveler I know dozens of things that can delay flights – most of which are out of anyone’s control.  But when I’m trying to plan my day I need to base my activities on facts – and that’s where the lying is painful.  UA 210 was still showing as “on-time” after it was well known 535 was late and would never make it on time. 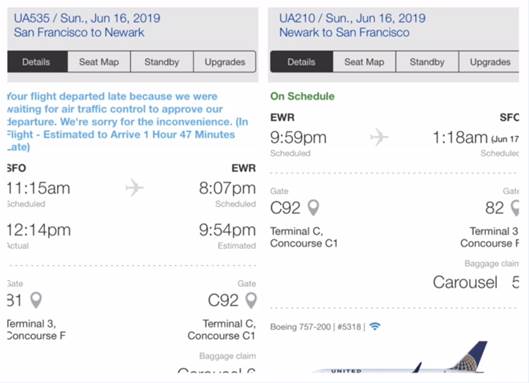 Do I go to the airport when I originally intended to, or head there later because the flight can’t possibly leave on time?  Every frequent traveler knows the answer there.  The aircraft might be swapped and there’s no way to tell.  I just have to get there on time and deal with the delays.

I did take the time to have a conversation with the United contact center agents that are monitoring Twitter, and of course got no satisfaction there. 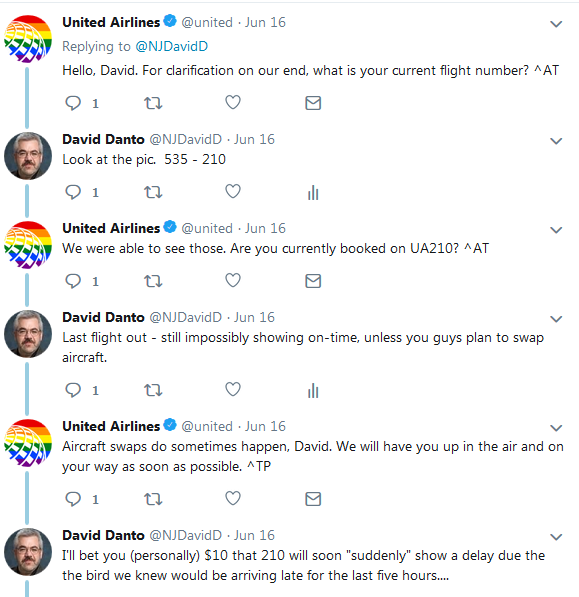 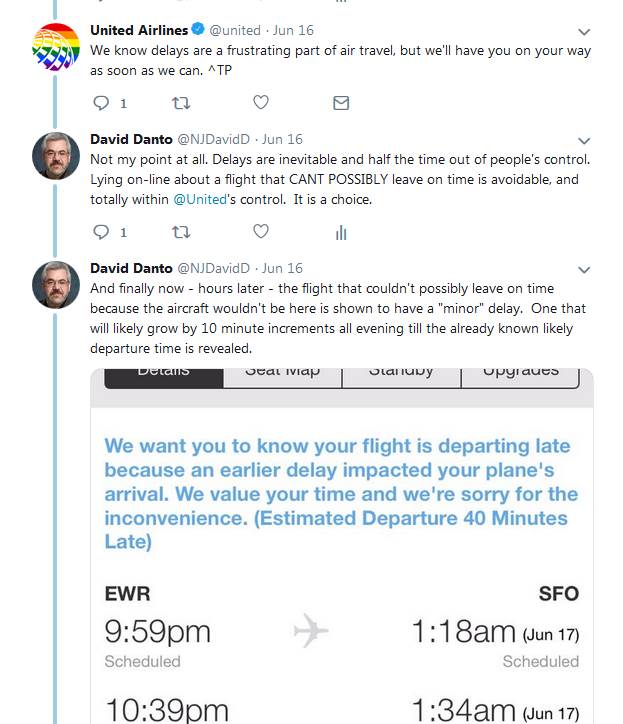 Thus began a comically terrible evening.  I arrived at the airport – tired but happy after a day out celebrating with my family.  What did I want to do?  Just wash my face and relax.  Amazingly, I discovered that there is no running hot water at Newark Terminal C – even in the pitiful United Club there.  All the taps pour freezing-cold water.  I couldn’t even get that small level of comfort.

As I predicted, the delays just compounded in small increments.  The stupidly dishonest and absolutely impossible turnaround time originally posted by United (when they got around to finally admitting the delay) began to creep towards what they likely knew the delay would be all along in subsequent updates – and they changed the gate twice along the way just for the heck of it.

When we finally got to board the plane, the captain was standing in the Jetway, telling us that the APU and tail motor were not working, and the plane was very hot.  He told a mother carrying a baby that she may want to stay on the Jetway for a while.  The aircraft temperature was just shy of 100 degrees Fahrenheit.  (Just the atmosphere I want to be in when I’m exhausted, have to fly all night then go to a meeting in the morning.)  The captain told us there were a “couple of issues” with the plane, and it will get cooler as they roll up a new APU and fix the tail motor and one of the lavatories – he says it will take “about fifteen more minutes”.  Here’s where the delays are no longer the weather’s fault and now fall squarely on United’s terrible maintenance procedures.  The “fifteen more minutes” becomes just one more in a series of the evening’s lies.  The delays continue to grow in small increments. 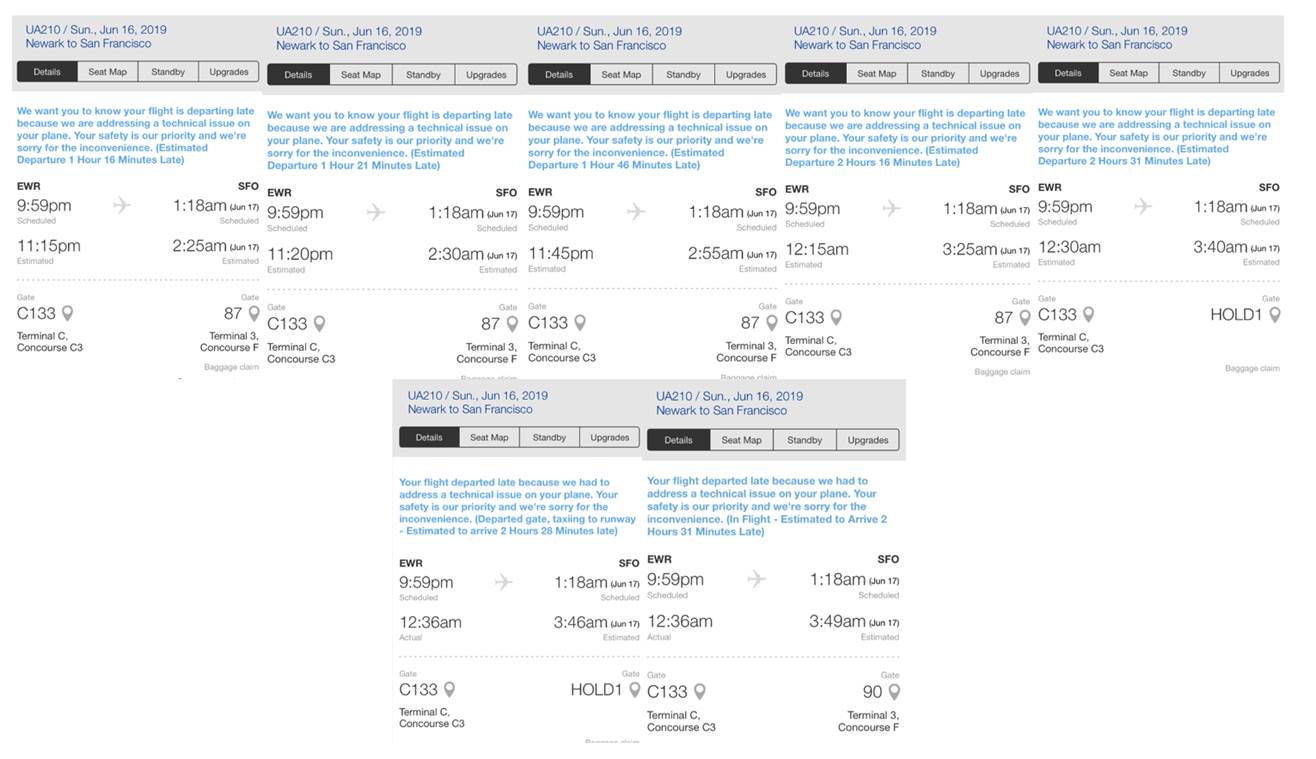 I just love how the explanation eventually switched to saying “safety is our priority.”  If that were true there wouldn’t be so many faulty APUs at Newark that need to be repaired on my time instead of before the aircraft comes in.  Safety is not their priority, spending as little money as possible is United’s priority.

In any case we do finally take off almost three hours late.  What do I want?  Same as before – to wash my face with some hot water and get some rest, as I’ll likely have no time to sleep before my meeting.  Yup, you guessed it – no hot water in the lavatories on board.  I still need to use freezing cold water to wash.

When we landed, you would think that United – with almost three extra hours to plan it – would have a gate and crew ready to meet us after all the inconvenience.  Nope.  15 minutes parked at the gate (with the plane again being exceedingly hot) with the passengers uncomfortably standing just waiting for a Jetway operator.

After finally getting off the plane at around 4am Pacific (7am for my body clock) what did I want to do?  That’s right – wash my face with some hot water.  The men’s room at SFO near gate 80 rotunda was unbelievably gated closed.  With no one waiting I decided to use the family restroom around the corner.  However, no dice in there either – a single tap with freezing cold water.  Apparently no one at United cares to pay for hot water heaters at their facilities – at least not for this evening.

When the United flight crew realized how much they had put the passengers through – lies, wait, sitting in an oven, more lies, no hot water, no sleep, etc. – they received clearance to offer some compensation to the passengers for all the trouble just before we landed.  The United method is to visit their “UnitedCares” website, plug in your data and pick an offer.  So what would you think would be adequate compensation for a Million Miler / Elite flyer after a night like this? 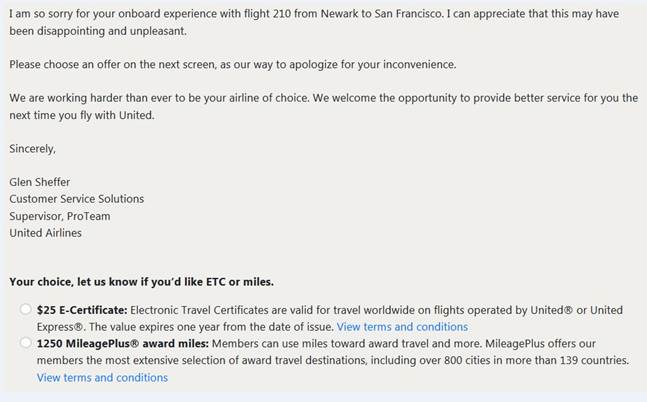 Yup – you read that right.  Twenty-five bucks.  That’s more of an insult than an offer, and I know they know that.  It doesn’t even cover the cost of the flight’s WiFi.

At any point in the evening United could have at least been honest.  ‘Come to the airport an hour later – we know they’ll be some delay and we’ll change the official departure time so you won’t miss an earlier departure’ or ‘This aircraft has a significant mechanical issue and we’re going to delay boarding for an hour so you don’t have to sit in 100 degree temperatures.’  Their choice was to consistently not tell the truth.  The airline modus operandi is to try to minimize the damage by dishonestly being optimistic, then slowly metering out worse and worse information until the truth is finally revealed.  I don’t understand why they can’t just treat people with respect and honesty and let us make our own decisions as adults.  Whatever the reasons, the culture of dishonesty hasn’t changed since I started flying, and shows no signs of ever getting any better….nor for that matter does the United experience flying from EWR.

As a final cap to this report, I flew back to EWR on Wednesday on – you guessed it – that very same aircraft – 752 #5318.  The air conditioning while boarding was still not working properly (but it wasn’t sweltering like Sunday night) the rear lavatories still had no hot water, and halfway through the flight the IFE system on the A-B-C side of seats in Economy Plus froze and couldn’t be restored.  I honestly prefer flying on the older aircraft as the seating is usually more comfortable, but it seems like this bird needs a serious maintenance overhaul.