Greetings from the 2013 National Association of Broadcasters Conference in Las Vegas.  As I mentioned in last year’s show wrap-up this is still really a conference in search of a definition.  Although heavily attended (92K + registered this year) it is more like watching a “Battlestar Galactica Ragtag Colonial Fleet” than a cohesive assembly of focused exhibitors and attendees.  The theme of the show was “Metamorphosis”, which really seems more like a fervent aspiration than a statement of fact. 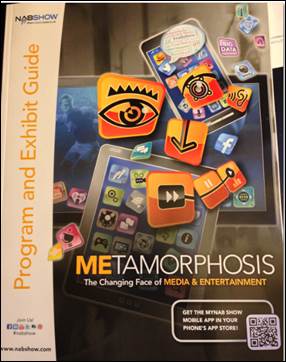 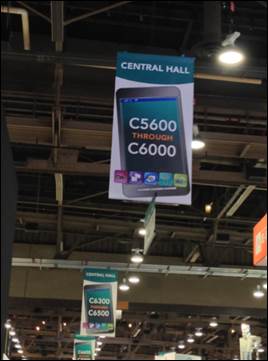 As one example, what does it say about a “broadcast” conference that is using a smart device as its on-site signage imagery?  The conference is now really much more about media content creation and management than it is about broadcasting.  NAB members are in a state of near panic over the significant growth of “Zero TV Homes.”  "Getting broadcast programing on all the gizmos and gadgets - like tablets, the backseats of cars, and laptops - is hugely important," an NAB spokesman was quoted as saying.  It is well past time for this conference to change its name.

One of the themes that emerged early in the conference was 4K.  4K or Ultra HD (UHD) was everywhere!  You couldn’t spit without hitting a sign, poster, flyer or person hawking how great this next innovation will be. 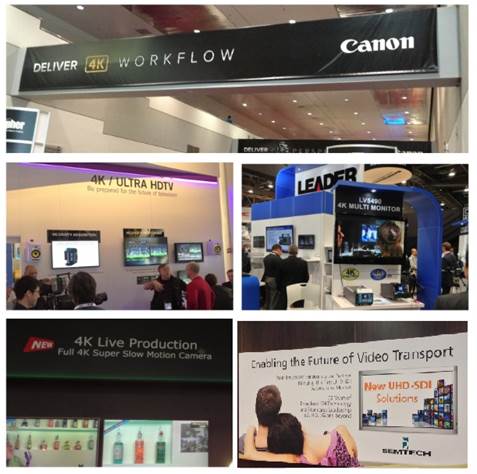 UHD images are fantastic, but there is still no practical way to deliver UHD programming to homes, so it is all a bit of the cart way before the horse.  Sony announced their plans for a DTH UHD service to be available this year at January’s CES conference, but there have been precious few details released past the initial announcement.  Still, as Broadcast Engineering put it in their tweet, “If you aren't early on 4K, you're already late. Big dogs pushing hard now.”

I also saw tacit acknowledgement of the “Changing flow of Storytelling” theme that I reported came out of the International CES Show in January – consumers now take in their content differently, and are not going back to sitting together on their sofa watching TV for hours.  Both “second screen” content and the alternate distribution methods I referred to above were very important topics to the content providers here.  There is an underlying sense of desperation that these concepts must be embraced if providers don’t want to be left behind.

From what I’ve heard from the sessions, many of the TV broadcasters in attendance were upset about this and other things.  I heard comments like “I’m only going to upgrade once, and it will only be because the change will be directly tied to increased revenue.”  There is the fear that any move to a 4K/UHD production workflow will be made obsolete by 8K technologies following closely behind.  There was a great reluctance to invest without a sense that there will be clear ROI.

Many broadcasters were not just upset, but actually combative about another new technology / service – Barry Diller’s Aereo.  If you haven’t heard about it, Aereo is a service that will rent you a tiny over-the-air TV receiver the size of a chip.  You can use it to watch TV as if you were at the receiver site – change channels, set your DVR, etc. – and stream it to your PC or connected device/display. 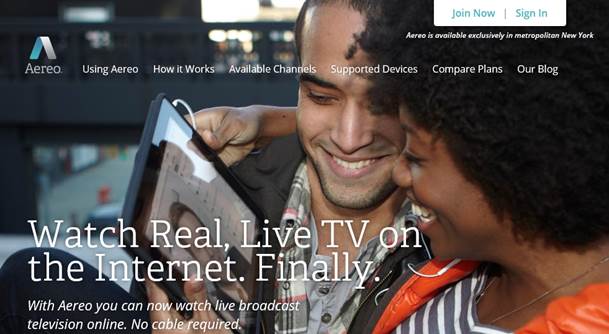 Available currently only in the New York area, Aereo has come up with a technology so small that they can fit massive numbers of these receivers into a small space.  They charge users only for the use of the technology, not for programming.  They feel that if you were at the location with any over-the-air receiver you wouldn’t be charged for programming, so there is no need to charge you for it if all they’re doing is giving you remote access to one.  The broadcasters - well – don’t agree.  Many of them have taken legal action against Aereo for theft of programming – but so far Aereo has prevailed in the court decisions.  The broadcasters feel that Aereo needs to pay them for the use of their programming – like any other television program distributor.  Chase Carey, the president and COO of News Corp, said at the show that if the broadcasters are not successful in getting  this “stealing [of their] signal” to stop Fox would consider entirely doing away with the broadcast TV model and make Fox programming available only as a subscription service.  CBS CEO Leslie Moonves was also quoted as having agreed with the comment, and also has threatened to cut his New York over-the-air signal if no remedy is found.  That all probably isn’t going to happen anytime soon, but the clear acknowledgement that there is more revenue for a programmer in alternate distribution than in traditional methods reverberated throughout the attendees.

As far as the technologies on display go, there is a lot to talk about.  In a general sense, Cloud Services was a hot topic.  NAB hawked cloud in 2011 (as I covered in my 2011 show report) without many real products / services to show. Now two years later the hype has substantially died down but there were significant numbers of exhibitors with high quality solutions.  Services and products to securely manage and distribute media off-site are available and compelling.

For some specific highlights of technologies and/or products that were on display:

·         The Chyron Corporation – longtime leader in traditional TV graphics – has merged with Hego and become ChyronHego.  They were showing some very compelling products, including their PlayerTracking System. 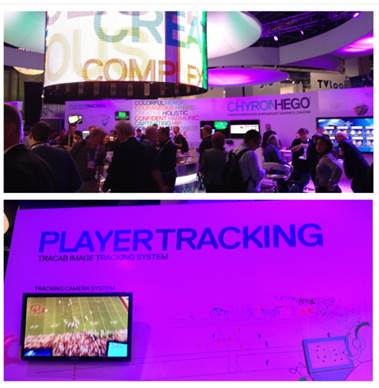 This system can watch the action on a sports field (or anywhere for that matter) and track the location and motion of any or all persons or objects.  They are currently using it to produce real time graphics – such as the players’ speed, distance from each other, acceleration, number of scoring attempts, etc.  – as the system independently tracks all activities as they happen.  The possibilities that this technology brings lead me to think that they have only scratched the surface of useful applications.

·         There were a number of companies with compelling new products in digital image monitoring and functional distribution.  Ensemble Design’s BrightEye NXT 430, Plura’s SFP-217-3G, and this little gem from Decimator Design 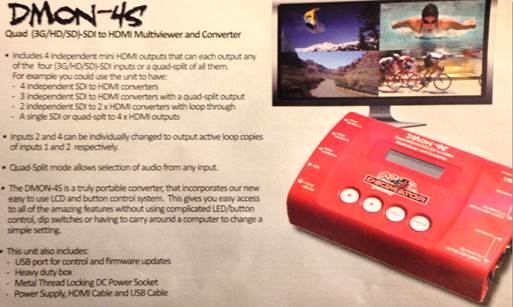 The DMON-4S can give you any combination of four SDI inputs to four HDMI outputs, showing a quad-split of any images.  The competing products are all very nice but are in the $4K range.  This little beauty is $700. 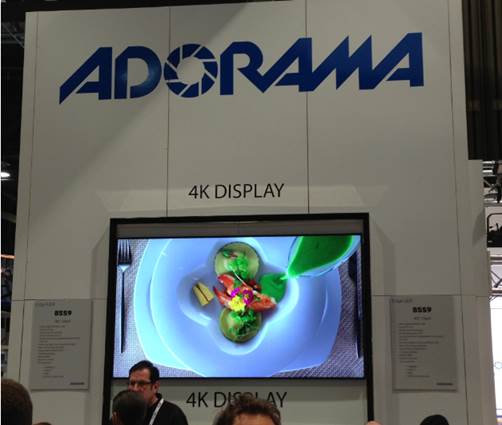 This is the only true 4K LCD / edge lit LED 85” display in the US.  It has a list price of about $45K, prompting someone on Twitter to comment “Just 45K?  Does it come with a lifetime warranty for that price?”   I share it as it highlights the divergence between where the manufacturers are (big screen, super-high quality, expensive) and typical consumers are (small screen, streaming-video quality, little or no cost.)  The number of young households (or shared apartments) without traditional TVs is at its highest point ever.

·         Sony showed a number of technologies, but one that really stood-out was the HXR-NX30U Palm Sized Camcorder.

Sony really got this one right – it has a very reasonable cost (under $2K street price) and combines excellent quality with leading edge features – such as a built in pico-projector to display what’s been shot on a wall or screen.

·         There was an interesting product being shown in the start-up pavilion – the Padcaster.

It is essentially a custom-built frame for an iPad that allows you to use standard lenses, tripods and production accessories with an iPad.  It’s terrific if you’re already using an iPad for ENG production and already have all the accessories.  If you don’t already have them then it’s probably less expensive to just buy a good DSLR. 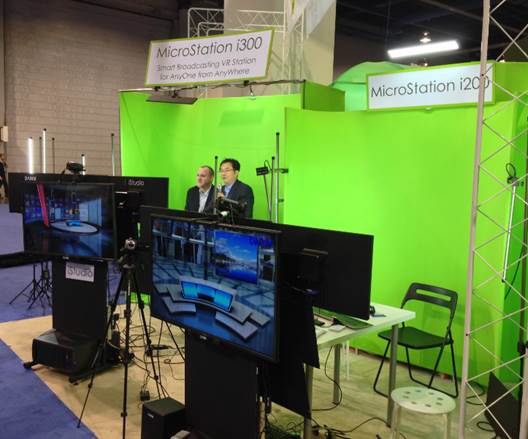 Their MicroStations come in a number of sizes and shapes.  These reduce the entry level costs of creating a studio for broadcast or streaming use to a fraction of what it used to be.

Instead of sharing my usual “Pick Hit” of the show with you this year, I’ll rather tip my hat to Broadcast Engineering Magazine and their comprehensive list of Pick-Hits from the exhibition.  These selections are not made by their editors, but rather from an independent panel of industry judges that I have been honored to be a part of for nearly 20 years.  Click here for their list of deserving winners.

That’s it from NAB this year.  My next View From The Road will be from InfoComm in Orlando – June 11th through 14th.  I’m scheduled to be both a panelist and moderator at various events.  The IMCCA will again host the Unified Collaborative Conferencing Pavilion, and my Dimension Data colleagues will be there as well where we’ll be providing insights from our latest Unified Communications Research.