With the Interop and NAB conferences happening on back to back weeks this year I decided to attend both.

Interop – Including the “Cloud Connect Summit” covered such topics as mobility, software-defined networking, infrastructure, cloud computing and virtualization and collaboration.

Interop is one of the few remaining “generalist” IT conferences.  It has a wide breadth of topics which actually makes it one of the smaller industry shows – with about 12K attendees.  Cloud specialists go to cloud shows, Network experts attend network conferences.  Interop attendees are usually IT generalists that are looking for one opportunity to cover many topics at a single event.  My focus at this conference was on the collaboration track, so my comments will be strictly in that area.

The collaboration track had a number of sessions covering the state of videoconference rooms, WebRTC and other interesting topics.  One of the most widely attended was Brent Kelly’s presentation on Cisco and Microsoft. 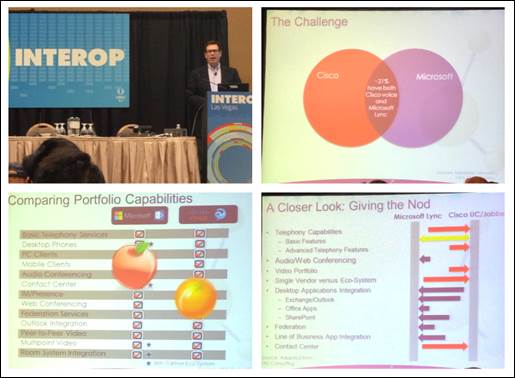 Both firms are in a pitched battle to be the leader in enterprise unified communications, with Microsoft having the more ubiquitous and easier to use “Lync” front end, and Cisco competing with their “Jabber” front end connected to the much more robust Cisco control and infrastructure offerings.   As he pointed out (and I often say) the decision between Cisco and Microsoft within an enterprise is often not a technical one, but rather one that resembles a religious holy war.  End users and enterprise administrators in both camps are often blindly loyal despite any facts that contradict their beliefs.  Still, Brent did an admirable job walking the attendees through each solution’s pluses and minuses.  My only minor criticism of his excellent presentation was that he skipped over the products coming to the market that allow users to keep the best of both (Microsoft at the desktop with Cisco’s superior VOIP and infrastructure.)  This is a direction that adds complexity and requires third-party solutions as gateways, but more and more organizations are opting for this approach.

On the last day of the conference I and my Dimension Data colleagues presented a session on Emerging Video Technology.  One of our key points was the current state of AV/IT convergence and how that has impacted the enterprise “videoconference room.”

Our industry has a real problem with expensive, overly complex rooms on one end of the spectrum, and cheap, webcam based offerings way over on the other side.  It’s something I call “The Goldilocks Syndrome,” with organizations in a very difficult search to find solutions that are “just right” for all their circumstances.  Rather than continuing to describe what my team spoke about from our own perspective, here is a link from TPO News’ David Maldow giving his impressions of our session - http://www.telepresenceoptions.com/2014/04/interop_expo_las_vegas_emergin/ .  His article has a link to a publically available version of the slides we presented.

After a brief non-technical respite on Saturday (when I was able to catch the new Marvel movie – Captain America and the Winter Soldier in IMAX.) It was time to change gears and attend the pre-show events of the National Association of Broadcasters conference.  (As some of you may be aware, I have been attending the NAB conference for over 20 years as a “pick-hits judge” for Broadcast Engineering Magazine.  Sadly this year I was not, as the Broadcast Engineering publication closed-down last November – a sad comment on the changing model of news consumption.)

The NAB Show – and in all honesty the entire Broadcasting industry - is struggling with change.  Having attended this conference for more than two decades it’s interesting to see it continue to grasp for relevance in the middle of an explosion of new technologies and trends.  Having acknowledged the urgency to change its business model with such past themes as “Broader-Casting” and “Metamorphosis”, the conference organizers this year presented the over 90K attendees with the amorphous theme of “Channel Opportunity.”

Was that supposed to mean that there are new distribution channels opening up to broadcasters…or did it refer to the fact that while most US national programming is just a plain disgrace to the medium, on Sunday evenings we have the rare opportunity to change channels and choose between two excellent programs - The Good Wife and the new Cosmos?

Whatever it really meant, there is no doubt that the disjointed state of broadcasting in the face of new technology is severely impacting the industry.  With firms like Aereo on one end presenting compelling solutions that existing laws cannot prevent (much to the consternation of programmers), and on the other end firms like Netflix and Amazon creating distribution channels that bypass broadcasters with content that is superior in both technical and artistic quality, being a “broadcaster” just doesn’t have the glory and honor it once did.  At this year’s conference the industry representatives began to take-on these new challenges.  For example, as the FCC continues to reallocate spectrum from traditional over-the-air broadcasters to modern technologies, those representing the NAB warned of the consequences.   Gordon Smith, NAB president and CEO, argued in his presentation to the conference that the playing field is unfair. 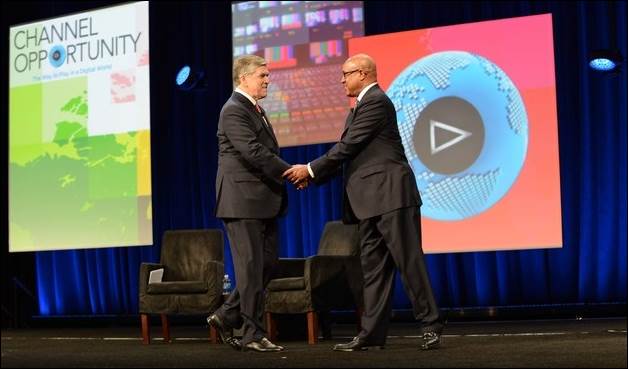 He stated that federal regulators have different sets of rules and requirements for over-the-air radio and television stations then they do for the broadband industry (which is distributing content via the internet and over data based wireless devices.)  “The wireless industry covets our spectrum because they chew through their massive allocation of spectrum, attempting to deliver the video we deliver far more efficiently,” he said Monday. “And they continue to milk, bilk and bill by the bit.”  While his thoughts on the lack of regulation for the broadband industry are dead-on, he misses the point that broadband can deliver desired content on-demand and with higher quality and resolution than over the air broadcasters can do today.  In fact, 4K television programming will be delivered to the home by broadband connected set-top-boxes long before any broadcaster can do it – which once again questions the very definition of broadcasting.

Changing gears and speaking of 4K, it was definitely one of the big themes at the conference.  Many of the hardware manufacturers at the show were showing new camera and infrastructure equipment optimized for that 4,000 horizontal pixel resolution standard. New 4K cameras were being shown by Sony, Aja, BlackMagic, Red and others.  Prices are also plummeting.  The new BlackMagic Studio Camera carries a list price of $2995 for a full HD configuration.  (That’s 4K for 3K if anyone’s paying attention…)

4K workflow was also a very hot topic.  Trying to figure out how to manage the movement of high resolution content from acquisition to distribution is a very complex problem.  Many broadcasters are reluctant to refit their infrastructure to this standard with even higher quality resolutions (8K) waiting in the wings. 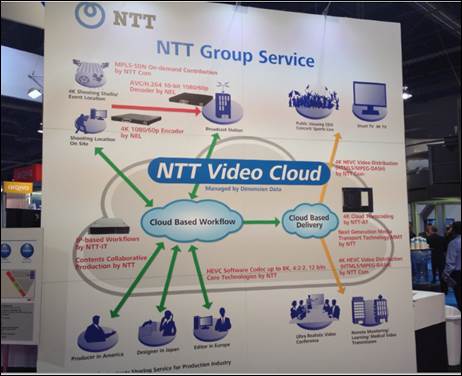 My firm’s parent company, NTT, showed their version of a cloud based 4k workflow which would offload much of the heavy lifting to a third party service.  This is the first time I can remember seeing a cloud story for HD broadcasting actually deliverable in an end-to-end solution.  The promise of cloud for broadcasting has finally become reality.

For the most part the exhibits floor was really a tale of two cities this year, with nearly half of the exhibitors showing high-tech, high end, future ready solutions, and nearly the other half showing low end devices – such as an iPad mount for a tripod, or this new firm – BigBalance – showing stabilizing mounts and handles for smartphones and pro-sumer devices.

As with recent past NAB shows, the exhibitors were so all over the place that it was hard to classify that many themes that will prove to be impactful going forward.  One exception however is clearly in the area of film and TV lighting.  LED based instruments took the leap from “cool new accessories” to “grown-up solutions” for the first time anywhere at this conference. 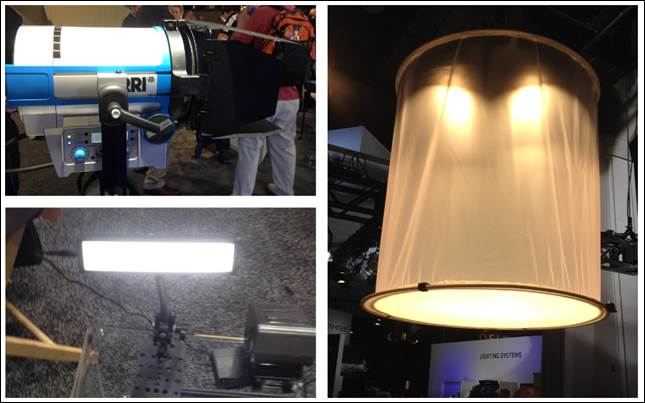 Many new lighting instruments from multiple manufacturers have used LED engines, but for the first time the new releases are producing light levels with as much illumination as industry standard incandescent fixtures – with the added benefit of color temperature being adjustable from daylight to tungsten and everything in between.  This is a milestone moment in production, where studios can now replace all their old lighting instruments (granted at a significant cost) but also significantly reduce their operating costs in both electrical drain and required cooling.  The promise has finally been delivered.  (Much thanks to David Landau for helping with his expertise in this area.  Check out his forthcoming text on lighting.)

That’s it for this edition of A View From The Road.  My next edition will be from InfoComm 2014 in Las Vegas in June.  It will be an awesome event, with the IMCCA producing a record 10 sessions on UC and my Dimension Data teammates showing why we are the global leader in ICT.