A View From The Road Volume 9, Number 4

·      Things Attendees May Have Missed

Greetings from the just concluded 2015 InfoComm conference and exposition.  This was the 76th annual get together of the association that represents all things AV and Communications.  The attendance was reported to be 39,105 people – up from ~38,000 last year.  Of course, the attendance would likely have been closer to fifty thousand, but there are about ten thousand potential attendees still looking for a parking spot near the convention center.  The pluses and minuses of Orlando have been discussed too many times to bring them up again here – and this conference will be back here again in 2017 and 2019 regardless of any complaints – but it is sure a more difficult conference to exhibit at and attend than the ones in Las Vegas.  I can’t even show you a picture of the whole main entrance without capturing some cars that had no place else to park.  I’m just lucky the photo below came out clear considering all the sweat and condensation around my smartphone’s lens. 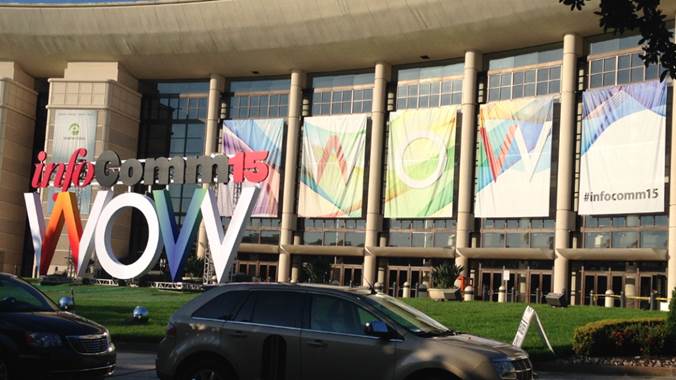 I’ve finally conceded to myself that I can’t possibly do all the things I do at InfoComm and give you a fair and complete wrap-up of everything that happened at the conference – or even just everything that happened in UC at the conference.  As opposed to some other conferences I go to as an attendee or analyst I am deeply involved in the educational programs offered here – and honored and proud to be so.  This View From The Road will contain my thoughts and observations without even attempting to be complete.  For more a thorough analysis and coverage of the conference I’d suggest looking at my friend David Maldow’s Let’s Do Video website as he gets his observations completed and posted.  Or, if you’d like details on every single product and service shown at InfoComm, there’s always RavePubs video coverage.  Gary Kaye’s team covers the show like a blanket would cover a marble.

InfoComm and the IMCCA presented the second annual Unified Communications Solution Summit at the conference this year.  More than 400 people attended some or all of the three days of sessions on such topics as the Unified Communications Roadmap, AV/IT and The Changing Face of Collaboration Rooms, Designing and Implementing Workspaces For Tomorrow, Touch and Collaborate with Today’s Interactive Displays and many more. 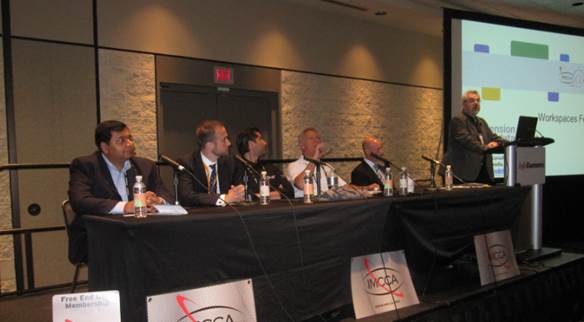 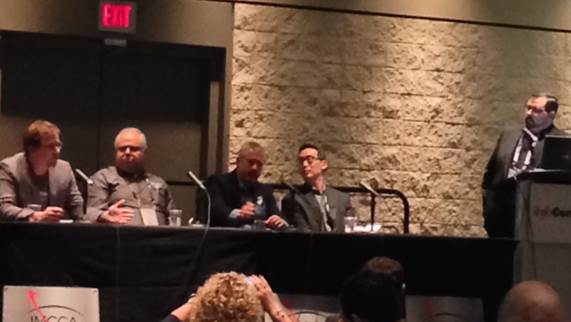 There has already been some excellent press coverage of the sessions – with articles and blogs on AVNetwork, InfoComm Events, and a couple on LinkedIn – so I won’t duplicate them here.  The key themes that ran throughout almost all of them were:

·         Unified Communications is an outcome, not a product that organizations can purchase – we have to stop selling and start discussing real business needs.

o   Custom room systems are going the way of the dinosaur

o   Everything is (or should be) getting simpler

·         The long sought-after interoperability between systems is achievable today

All of the slide presentations – and also recordings of some of the sessions – are available now by going to www.IMCCAInternational.org.

Just before I traveled to this year’s conference I posted a few random thoughts about it in a blog.  Apparently one of my very brief musings struck a nerve that requires some explanation.  I said:

“Booth Babes have no place at InfoComm.  Bravo to us that we finally have greater awareness of that now.  Regrettably, neither does a Women in AV movement.  As beneficial as the intent is, it is as offensive to me as a Catholics in AV or Caucasians in AV might be to others.  As an industry we should not be celebrating any special group.  We should be celebrating the best and brightest contributors regardless of labels.”

I sometimes forget that people actually read my blogs (thank you) and that amazingly includes people who don’t know me.  Those who do know me understand that there is no greater champion of diversity or supporter of women’s rights in the industry than I.  (The fact that equality / equal-pay for all is even still a controversial issue in the US is just pitiful.)  The point I was making is that diversity and inclusion needs to be achieved by different methods than those used historically to prevent it.  How does a special interest recognition of women help prevent irrelevant classifications and stereotypes?  How does it support others that are/have been marginalized by stereotyping – like the disabled, or veterans, or minorities, or the LGBT community, or any other group not in the “special class”?  It doesn’t.  It also apparently doesn’t really help women – at least as far as recognition is concerned.  If you take a look at the InfoComm honorees this year the only awards not given to white men were in the women in AV category.  I don’t believe that’s as much an honor as it is tokenism – something that potentially makes people feel relieved of responsibility to make actual change toward real equality.  It’s hard to believe that as an organization we couldn’t find one female worthy of a general award (which is named after a woman to boot.)  I have said many times that our industry needs a brand-new, completely neutral and unbiased Hall Of Fame, where we induct twenty or so people a year.  Without a history of biased inductees to compensate for, such an honor could create role models for all to look up to – not just one special class.  We should have the will to come together and do this under the InfoComm umbrella.

Since posting those original few sentences I’ve learned some things I didn’t know.  I learned some people were genuinely offended by what I wrote, and for that I apologize.  I’ve learned that “Women In AV” is not an InfoComm organization – I don’t know who else knows that.  InfoComm has an official Women in InfoComm Network (WIN) which is completely different.  It was wonderful to meet with some of their leadership at the conference and discuss some ideas about what we can do to increase inclusiveness in our industry.  I volunteered to help that effort in any way I could.  I’ve also learned that standing-up to and reporting bullies on Twitter is easier than it was before, so thanks to them for the improvements.  People who want to bring respect to their group or special interest but do not show respect for the opinions of others do not deserve a voice in this conversation IMHO.

There were a lot of manufacturer announcements, product news and general observations at InfoComm that surprised me this year:

It’s always good to catch-up with the great people at Crestron and see what they are up to.  There was lots this year about DM3.0, RL2, family certification and even Fusion, but did you realize how scarce any touch panels or control systems were?  Crestron is run by very smart folks – they know what business they’re in.  Does the typical AV integrator realize it?

Cisco had their typical terrific booth, showing the latest in high quality, enterprise grade visual collaboration.  But did you notice how just about everything they showed was plug-and-play?  No rack-mount anythings, no need for old-school AV integrators – just unbox, plug power and network, and get started calling.

Did you get a chance to stop by the Acano booth?  I was surprised to find out that “in-band video data sharing” that some of their competitors like to bash them about is gone.  They now preserve the Lync / Skype for Business and videoconference unit experience with bi-directional data support using Microsoft’s “stage” and standards based codecs’ content methods (BFCP/H.239).  They also discussed a method of using their system’s firewall traversal instead of those of some of the big players in the space – who charge for traversal licenses.  That could represent tremendous savings for some organizations. 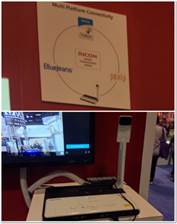 Did you notice that Ricoh’s little videoconference system – the P3500 – is now standards compatible using BlueJeans and Pexip?  A tablet sized all-in-one room videoconference system that can be carried as needed from room to room was always a great idea – but one that was discounted by users because it only worked with Ricoh’s ecosystem.  Now that this can work with any endpoints it is something that requires a second look by everyone – I’m sure including competing manufacturers.  For now though the large numbers of organizations that already use BlueJeans will likely start buying these relatively inexpensive endpoints by the dozen.

With all the wireless display connection products out there, did you catch that the Kramer Via series is the only one that uses enterprise grade encryption, supports a full 60 FPS in HD, supports native PC, Apple and shortly Android wireless transmission, and supports annotation?  Rarely do you find a product that just outshines the entire rest of the class like this does.

Did you notice Polycom’s announcements at the show that their platform now fully supports WebRTC?  One of the UC panel participants gets the “quote of the show” award with “The pioneers get arrows, but the settlers get the gold.”

Did you get a chance to catch me moderating AVNationTV Crosstalk?  If not, the entire debate – HDBaseT vs. Video over IP – is available on YouTube.  It’s great that we’re in an industry big enough to hold all opinions and move forward – big enough in every way.  All Voices is what we call it I think.

The second I set foot on the show floor my Twitter feed started buzzing with “best in show award winners.”  Many of these “winners” already had fancy statues and plaques in their booth announcing that they won.  Regrettably, it is time to call these out for what they are – graft.  Some analysts, publications and organizations sell these “honors” to the highest bidder or present awards to their business partners and advertisers.  Not only were there “best in show” winners before the show began, there were winners that weren’t even exhibiting at the show.  These practices devalue the whole industry.  My advice to attendees and user organizations is to ignore any “best” awards announced until the show is over.

My “best” then has to go to Smart for their Smart Kapp IQ. 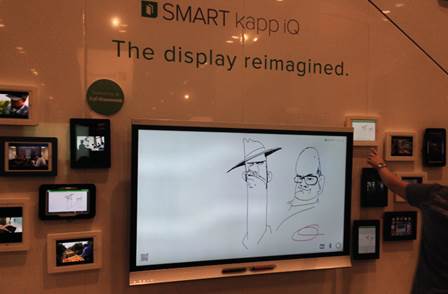 It takes a lot for a company that has been in business for a long time to look at themselves honestly and reinvent what they do.  Smart has done just that in the creation of a whole series of Kapp interactive displays and share-able whiteboards that are as easy to use as a marker and paper.  Simple devices, no instruction needed, connection to a simple app – all delivering huge increases in productivity and full participation by remote workers.  Their latest product – The Kapp IQ – is a 4K display / IWB that is as easy as it is powerful.

That’s it for this View From The Road.  Look for the next one in in the fall from InfoComm’s new Connections show in New York, co-located with CCW.