A View From The Road Volume 9, Number 3

Random Thoughts From 2015 NAB and Interop

·      Collaboration Amidst the SDN

How far can you walk into a circle?

As you may remember, the answer to that old brain teaser is halfway – because after that you are actually walking out.  That’s what comes to mind as I recall and describe my April road-trip experiences at conferences where I have important interests that are tangential to the majority of attendees.  The NAB conference was once the highlight of my annual agenda.  While it is still a large show - with over a hundred thousand registered attendees this year– it has become so disjointed in recent years that it’s difficult to perceive any overall themes and trends.  This goes back to what I wrote about NAB 2013, in that “it is more like watching a “Battlestar Galactica Ragtag Colonial Fleet” than a cohesive assembly of focused exhibitors and attendees.”  The public’s interest in the area of “Broadcasting” is indisputability waning.  People are “cutting the cord” from traditional broadcast program providers at such an escalating rate that the once blasphemous concept of cable networks like HBO selling their content directly to the public is now a reality.

Interop on the other hand has always been a much smaller show – about 1/10th the number of attendees as NAB - focusing on the IT professional with a leaning toward network technologies, cloud, security and the like.  I was part of Interop’s Collaboration Track - another 1/10th, this time of the overall Interop educational offerings.  Instead of walking out of the circle in this case I’m probably barely penetrating past the circumference.

Still, there were important insights reflected at both conferences that are worth highlighting.

NAB’s tagline this year was “Crave More” which was extremely appropriate for a number of reasons.  Telecom companies crave more over the air spectrum for their services, the US government and current license holders crave more money from the sale of that spectrum; programmers crave more of the on-line audience; manufacturers crave more customers for their products; etc. 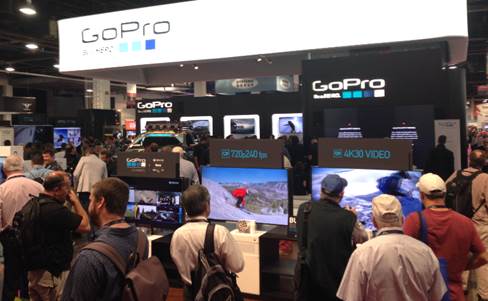 It was in fact difficult to keep track of all of the various constituencies and what they crave.  In addition to traditional television and radio broadcast equipment firms and service companies there was a huge interest in the pro-sumer space, with everything from a dozen small camera image stabilizing handles to a perpetually crowded GoPro theater.  In fact, if there was any trend to discern, it would be the clear indication that it no longer takes a license, transmitter, studio, etc. to be what is acceptably understood to be a broadcaster. Buy a GoPro or any other DSLR, load your content into the cloud using AWS or any other service and voilà – you can be the next Netflix.

Of special interest to all the constituencies was all the recent chatter about Net Neutrality.  It is a space that is not as simple as Jon Oliver’s recent debate defining / turning-point rant on “Cable Company F**kery” makes it out to be. While nobody likes cable companies, did you know that the current rules as proposed exclude protection for VPNs, CDNs, Unified Communication, Collaboration and just about any other enterprise use of the internet?  I won’t even attempt to replicate Josh Srago’s fine coverage of the complex issues involved, but I will point out that he reports his hoped for  “Roger and me” moment with FCC chairman Tom Wheeler didn’t happen at the conference.

One thing that did happen was the start of the great “unbundling” wars.  For the first time in the industry, a cable TV provider (Verizon) announced that they will let their subscribers purchase only the cable channels they want to see in an a-la-carte fashion – which is something viewers have asked for for years.  Of course, the programmers were not the least bit happy about this, with Disney’s ESPN taking the lead on the other side of the war, stating that any unbundling would violate their contract.  ESPN is frightened that give the choice, consumers might not select to pay for extreme bottlecap pitching and some of the other fakesports they cover on their multiples of channels.  Expect this war to go on for a while  - and get quite heated.

DUCK!  One of the things we’re seeing at every technology conference this year is drones.  These are the small, remotely controlled aircraft that can shoot breathtaking video, deliver packages, deliver radioactive protests, buzz the White House, interfere with commercial aircraft and the like.

NAB was no different, with its share of drones to shoot news video, drones to make movies, and the requisite drone arena or two.  I’m 100% sure that every future technology conference is thinking of a decent rationalization to install their own drone pavilion / drone arena.  If as much time and effort was put into creating solid regulations around their ownership and use as was put into building tradeshow drone arenas we’d all be better off.

There were way too many products at NAB for me to even begin to adequately cover in one blog, but I do want to highlight one item I found that made me wonder why it hadn’t been invented years earlier.

DSC Labs showed a simple and innovative system called ChromaMatch.  It uses a calibrated, illuminated disc that sits in front of any display or screen, allowing simple visual calibration to a standard Jpeg file they provide.  The system can be set to match lighting in any color temperature.  Why wouldn’t every integration firm buy one of these and keep it around to test and adjust every display they install.  Great idea. 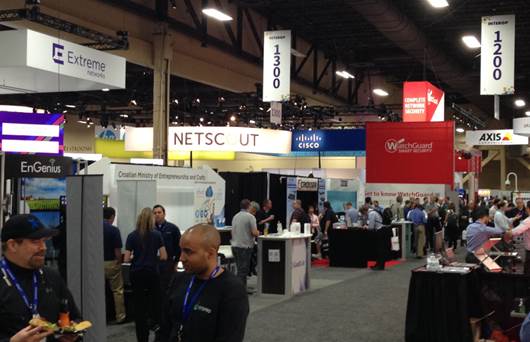 Changing gears, Interop Las Vegas 2015 was again held at the Mandalay Bay conference center two weeks after NAB.  SDN (Software Defined Networking) was clearly one of the biggest themes being discussed at Interop this year.  And while SDN represents a substantial curveball in network architecture and the future of some big firms in the space, I have to be honest and admit that as an old school collaboration guy it gives me the shivers every time I hear the letters.  No, not because of anything about open computing, but rather because it makes every one of us that lived through the early days of collaboration think we’re hearing about the nightmare of ISDN again.  I ordered enough 2B+d circuits in the 90s to know that the telco’s are probably still troubleshooting some of them that never got installed correctly in the first place.  I honestly wish they’d pick a different acronym for this.  Please….

The Collaboration track I participated in was full of great information, and it was presented to an audience that was in-kind with those I covered at InfoComm last year and Enterprise Connect a month earlier – full of “today’s communication and collaboration technologist, managers and professionals [who are]… younger, comfortable with mobility, more curious, willing to try new things and learn from peers – and … coming out to industry conferences in droves”  There were a number of great sessions.

Brent Kelly presented his thoughts on a comparison of UC alternatives from Cisco and Microsoft. 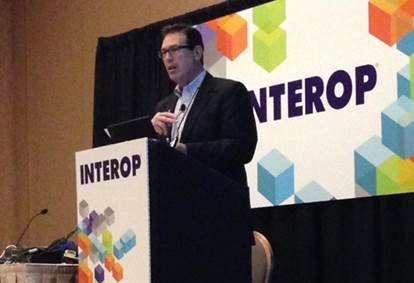 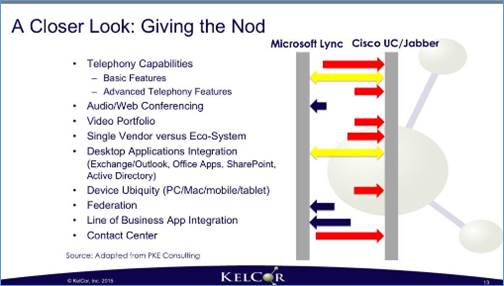 This included his opinions of how they perform in a head-to head face off, and then how organizations might use parts of both to achieve the best of both worlds – with his report that roughly 20% of organizations have both Cisco voice and Microsoft Lync. 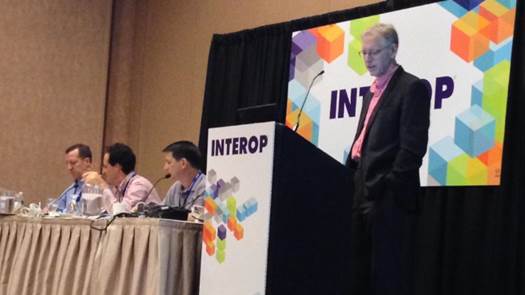 His panelists – Irwin Lazar from Nemertes Research, David Carr of Redbooth, and Peter Pezaris of Glip – discussed next-generation platforms such as Slack, Redbooth, Glip and others, detailing how they organize information and conversations into a format that represents a significant improvement over the standard tools in use today.  It is an interesting and certainly hot subject – with the ease of use of persistent virtual rooms and social collaboration overshadowed by the natural questions that would surround start-ups in such a heavily MS/Cisco/Google committed space.  (I personally still don’t understand how Slack could have 500K records hacked, and on the same day announce their next round of financing – attesting to the “go-fever” of VC firms with silicon valley start-ups nowadays – which is probably the formation of the next bubble that will someday pop.)

In my session, the Future of Videoconference Rooms – I covered how there is a new best practice in room collaboration, where big, expensive, custom programmed and integrated rooms are giving way to smaller, simpler, standard technologies.

This More of Less, Less of More strategy rapidly is taking over in organizations that are able to break-away from the 1980s style guidance of many architects and AV consultants.  (Eric Krapf wrote a great preview of my session for No Jitter a few weeks earlier.) I was very pleased to present to a full room of attendees – again showing over-the-top interest in collaboration considering the expo floor was already closed the day before and just about everyone was preparing to leave for the airport. 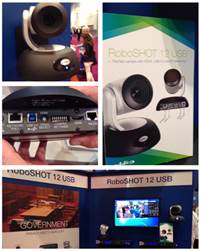 I must give honorable mention from both conferences to the robotic camera / digital audio firm Vaddio.  They were they at both NAB and Interop this year (as well as CES in January – in fact I’ve yet to attend a conference this year they weren’t at.)  Definitely do check out their new Roboshot 12 USB camera system if you get the chance.

From their website, “The RoboSHOT 12 USB camera is an Enterprise class, HD PTZ camera with USB 3.0 streaming, PoE+ GB Ethernet port for IP (H.264) streaming and an HDMI video output all built directly into the camera. The user can plug the camera directly into their PC and use any software application on any OS that supports USB 3.0 devices.” As far as I can tell, it is the only high quality HD camera on the market that can simultaneously output video via USB, HDMI and as an H.264 stream over its Ethernet port.

That’s it for this View From The Road.  Look for the next one in early July, after InfoComm’s annual conference in June – this year in Orlando.  I’ve been privileged to help author the educational track for the Unified Communications and Collaboration Solution Summit – co presented by the IMCCA.  (Take a look at this InfoComm UC preview video I put together with some industry colleagues to get a sense of what we expect to see this year.)  If you do attend please stop by the Dimension Data booth or one of the IMCCA events to say hi.