A View From The Road Volume 11, Number 5

Greetings from Las Vegas, where I’ve just attended LDI 2017 – the annual staging and lighting exhibition.  I’ve attended this show for many years – long enough to see its transition from a lighting centric conference to a display centric conference.  There is very little difference now between a high-end lighting instrument and a video projector – other than the application.  The exhibitor names at this conference that would be at home at InfoComm or DSE are significantly growing.  One subtle nod to the change in focus was the fact that the exhibit hall did not nearly have the quantity of smoke and fog as in years past.  Yes, there was some, but a clearer view of the videowalls was apparently more important than thicker beams of light around the instruments.

One key trend in the lighting space is a concentration on LEDs with high CRI readings.  The transition to LED based lighting instruments for typical use is nearly complete, and instead of just looking at the lumens of the LED lamps (brightness) it is important to look at Color Rendering Index – the gauge of how closely to sunlight the lighting instrument is able to reproduce natural colors. 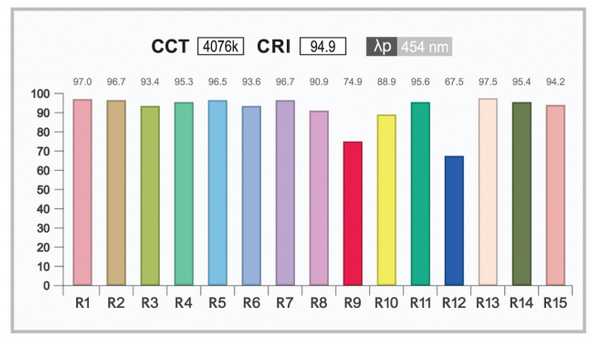 A CRI of 100 would be perfect, and one of 90 used to be considered high – but the quality of LED lamps is improving, and it seemed at this year’s show that 90 is now considered the minimum acceptable reading.  Click on the graph above to read its source article from one of the instrument manufacturers that details the nuances of CRI.

As I head home from LDI I realize that I’ll be back in Las Vegas for the 2018 CES in less than two months.  CES is shaping up to be a monster of a conference again, with again-expanded venues and a week-long schedule for press and analysts.  I’m honored to be an industry analyst and CES Innovations Award Judge again this year.

The key CES themes / tech trends I expect to look out for this year include:

·       Expanded use of biometrics in everyday devices

·       An explosion of voice control in our interactions with technology

However, those are just my ideas before going into the conference.  I’ll again write and post daily wrap-up reports, live tweet news and video segments, and put together a full show of coverage for my AVNationTV webcast Connected!  (Here is a link to last year’s wrap-up show.)

In looking at our industry in the last quarter, there’s been quite a bit of news recently:

·       Cisco announced more new endpoints that have integrated, solid-state, non-mechanical cameras.  These intelligent tracking cameras – with electronic framing that doesn’t require PTZ gears – now represent ‘table stakes’ in the videoconferencing world.  If you’re looking at a camera product that doesn’t have this feature, run in the other direction IMHO.  (As a reminder, I predicted this years ago.)

·       Microsoft announced that their Teams platform will replace Skype for Business as the collaboration front-end for all Office 365 users.  This bold move by MS to move their entry into the ‘slackalike’ competition to the forefront puts them at a competitive advantage to all the other enterprise players – if for no other reason than because of Office 365’s dominant penetration on enterprise desktops.  While other team platforms will continue to look for expansion opportunities, Microsoft’s flick of a switch will put it on tens of thousands of desks with no convincing necessary.  It will be tough for others to compete with the penetration.  At the same time though, the Lync to Skype for Business change announced with much hype in 2014 now heads into the sunset the same way OCS to Lync did.

·       InfoComm - with much fanfare - changed its name to AVIXA – The Audio Visual and Integrated Experience Association.  This change is meant to reflect their leadership’s opinion that the key to AV’s future is all about ‘The Experience.’   (The conference events will however still retail the InfoComm name.)  I have to admit I’m personally on the fence about the changes – yes, partially because my InfoComm Magic 8-Ball isn’t sure about the change, but partially because changing the name and desired focus doesn’t do anything to address the industry consolidation all around us (which I discuss later in this blog.)  Ultimately, as the old saying goes, a rose by any other name….

With the 2017 holiday season and year end approaching I usually take this time to reflect on what has happened in our industry and offer my thoughts and predictions for the upcoming year.   What I’m currently thinking about the future is essentially one big but:

·       Team chat is great for teams, but…  Just about all of the collaboration players have a team chat offering, promising a brand new, much better workflow for all mankind.  Um, no – I just don’t see it at scale.  I extensively use team chat platforms for small project teams – up to 20 of us working on a single goal or with a single interest.  It’s fabulous.  But as soon as you have one or more team members that won’t use the platform you have to double your work – emailing for that contingent while posting for the rest.  It gets harder, not easier.  Small businesses and small teams are thriving in the new workflow, but I believe it falls apart once it tries to scale to a large organization.  In addition, none of the platforms talk to any others, essentially dropping a nuclear bomb on the concept of interoperability.  This isn’t a comment on which platform is better than the next.  I actually believe they will all fail to scale, and, ultimately, my prediction is that this fad too shall pass.

·       M&A is great for business, but…   We tend to celebrate the activity in our industry as manufacturers, service providers and integrators buy-up smaller firms and add the DNA to theirs.  2017 was a year full of such celebrated transactions.  I personally don’t understand the cheering.  These are the death throes of the integration business as we knew it, and the reduction of choice in the marketplace.  John Oliver produced a great piece describing this for the general public, and the lessons he points out are just as applicable to AV and collaboration: consumer choice will be reduced, service quality will shrink, and some firms will become so large that they will collapse from their own weight.  In addition to that, I’ve learned many times over my 38 year career that good sergeant’s often make lousy generals – meaning that management teams which may have been successful at a small company often fall flat on their face at large ones.

·       The workplace of the future is an open office, but…   Most organizations ‘densifying’ their offices for the monetary gain it provides are ignoring the costs in lost productivity and employee moral that they are incurring in the process.  Very few architects and designers know how to create a positive open office space.  I covered the revolutionary change that is happening in the related acoustic science in a recent IMCCA webcast that is well worth watching.  It’s also important to note the continuing failures of every firm that has scapegoated remote employees and flexible working.  This distraction of blaming the remote employee for business failures or poor management has proven itself to be a failed rouse.  It’s impossible to identify an organization that ‘called their workers back-in’ and then turned things around – because none have.  It’s time for organizations to accept the fact that the nature of work has changed and to bring in experienced professionals to guide them in that business transformation.  (Remember, I know a guy…..)

That’s it for this edition of A View From the Road.  Look for my next update in January at CES 2018.  Here’s wishing you and yours all the joys of the holiday season and a new year filled with good health, happiness, peace and prosperity.

David Danto has had over three decades of delivering successful business outcomes in media and collaboration technology for various firms in the corporate, broadcasting and academic worlds - including AT&T, Bloomberg LP, FNN, Morgan Stanley, NYU, Lehman Brothers and JP Morgan Chase. He is now a consultant for the collaboration, multimedia, video and AV industries. He is also honored to serve as IMCCA’s Director of Emerging Technology. David can be reached at DDanto@imcca.org and his full bio and other blogs and articles can be seen at Danto.info.  Please reach-out to David if you would like to discuss how he can help your organization solve problems, develop a future-proof collaboration strategy for internal use, or if you would like his help developing solid, user-focused go-to-market strategies for your collaboration product or service.