A View From The Road Volume 11, Number 3

Remember Razzles - that chalky candy that turned into a gum when you chewed it.  (Razzles is a candy!  No, Razzles is a gum!)  It didn’t know what to call itself.  Greetings from Las Vegas where the 2017 National Association of Broadcasters conference is underway  - and reminding me of those old commercials.  The NAB is clearly Razzles.  First it’s a broadcasting conference, then it’s a content conference, then it’s a media technology conference.  No one really knows.  The theme this year is the MET effect – short for Media, Entertainment and Technology.  Basically, if you’re in media of any kind, in entertainment of any kind, or have technology of any kind, the NAB wants you as an exhibitor.  This lack of theme was even more obvious than usual this year, with content distribution firms next to manufacturers that sold patch-panels, and software companies next to hardware companies.  The juxtaposition was more jarring than useful.

Admittedly, I only stopped at the NAB conference for a brief time this year as I had to be at a conflicting event, so the thoughts I share below are hardly a full capture of all the exhibitors and announcements.  Rather than even try to do that I chose to seek out underlying themes that might not be obvious to the casual attendees or the other media covering the events.  The concept of broadcasting is going through a considerable transition right now.  What was once clearly the realm of ‘TV stations’ sending (i.e. broadcasting) wireless signals over the air, is now much murkier.  Is a channel on YouTube broadcasting?  Is programming delivered to your set-top box or your USB stick device over the internet still broadcasting?  Is on-demand content still broadcasting?  This conference and its exhibitors only highlighted the ambiguity.  What was very clear though is that the internet is the preferred medium for content delivery, content transport and content management.  The booths of antennas and satellite dishes dominant just a few years ago have been replaced with exhibitors stressing “IP” in all their slogans and signage.  What once represented the stigma of not being a real broadcaster in a few short years is now a badge of honor representing the future.

One of the big trends emerging in the space is automated production.  While traditional broadcast production involved manned cameras, big studios and lots of back-end gear, the trend is to be able to accomplish big-studio quality programming without the operators and facilities.  One form of this is the all-in-one app.   In the past the studio was ported into “a single box” by firms like Newtek.  Today, studios are being ported into single tablets.   For one example, the product below from Cinamaker uses wireless connections from dongles attached to cameras / smartphones and brings the content into a tablet that serves as the production switcher and recorder. 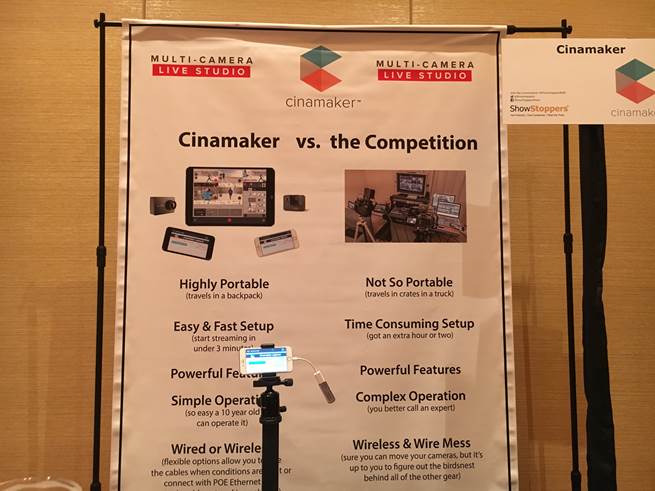 The clear benefits are portability, simplicity and price.  Another class of automated production that is emerging uses AI to analyze the activities picked-up by cameras to automatically ‘produce and direct’ sporting events. 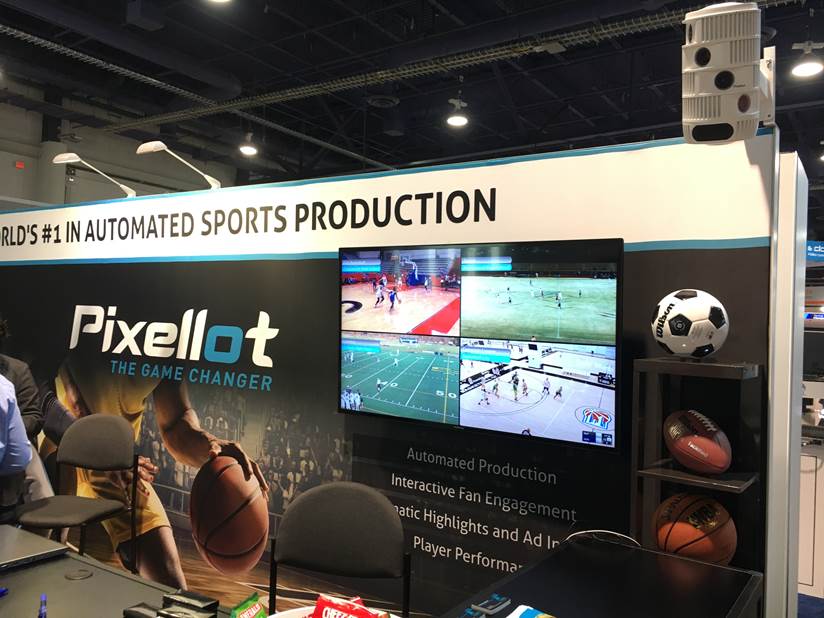 Pixellot uses a multi camera device that stitches a 180 degree field into a huge canvass, then uses a computer to follow the action as it pans a produced image across its virtual plane.  Subscribers can either receive a stream of the entire canvass, or the feed that follows the action.  One can expect more and more entries into this AI based production.  The good thing about this trend is that content production will continue to get easier and less expensive.  The bad thing about it is that automation will continue to extract jobs from the production industry.

There were a number of new devices and systems which could easily have been missed – and which I wanted to highlight:

·       Brother introduced a wearable camera viewfinder called the AirScouter.  It enables you to move your 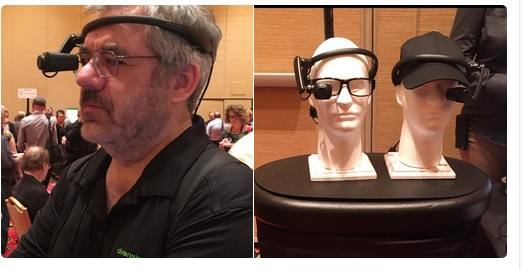 camera anywhere and see the images right in front of your eyes.  (When I posted this picture on social media my friends made a number of Borg jokes…rest assured I wasn’t assimilated.)  It clearly has a benefit for camera people, but I found using it disconcerting, as people can’t focus on a near field and a far field at the same time.  I was constantly racking focus with my eyes to switch between looking at the world and looking at the viewfinder. 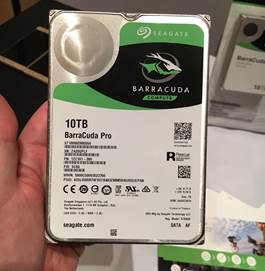 ·       Seagate introduced two new 10 Terabyte palm sized disk drives – one for the desktop and one for RAID applications – for storing large media files.  I know that sounds bland and simple, but every time a storage breakthrough hits the market I think back to the first 500meg external drive I brought home – slow, as bulky as a record player, unreliable.  Having 10TB in your palm is nothing short of awesome.

·       A number of firms showed new glue type devices that are able to convert HDMI to HD-SDI and simultaneously manage the reverse of HD-SDI to HDMI.  This enables the easy interchangeability of consumer video equipment into the production stream and production equipment into AV applications, opening a lot of doors.  This one, from the folks at Decimator was tiny and worked very well.  This class of devices at a great pricepoint (~$100US list) opens a lot of possibilities.

·       While this wasn’t specifically a digital signage show, there was a lot of digital signage present.   Planar introduced a large format display that was touch capable, a handful of firms showed 1.6mm pitch LED displays – which now seem to be the norm.  A particularly nice and inexpensive curved one was shown by DesignLEDpro – and you can see video of it here.

·       My favorite product of the show was an innovative use of polarizing filters.  Polaris by Studios.dk is a matte-box technology that can variably adjust the polarity of a camera lens.  When you put their polarizing film on windows (instead of ND /reduction gel) it is invisible to the people in the room, but the camera operator can adjust the box to let in to the camera only the level of light that they desire.  It turns a shot from having washed-out background windows to having a nice view of what’s outside, and can be controlled as the daylight level changes.  The picture below left shows the same glass as used in the motorized matte box to the right, simulating the turn of the internal glass. 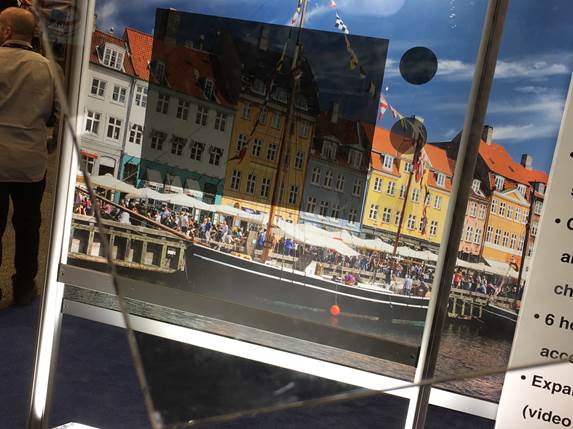 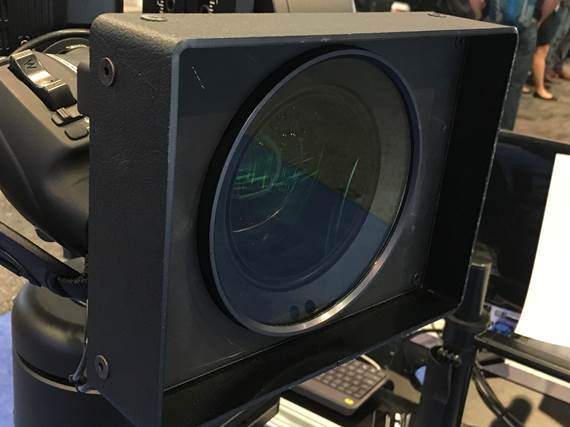 That’s it for this edition of A View From the Road from my brief visit to NAB.  My next update will be after InfoComm.  If you’re planning to attend please arrive a day early and join me and other industry analysts for InfoComm’s Emerging Trends day.  We’ll be covering all emerging technologies including collaboration.  I will be an honoree and presenter along with Brent Kelly, Irwin Lazar, Ira Weinstein, Tim Banting and many others.  See the press release for that event here and register for the entire InfoComm program here.  Come see us in Orlando in June and not only get to hear some great presentations, but join us for extended discussions in the Emerging Trends Lounge.

This article was written by David Danto and contains solely his own, personal opinions. David has had over three decades of delivering successful business outcomes in media and collaboration technology for various firms in the corporate, broadcasting and academic worlds - including AT&T, Bloomberg LP, FNN, Morgan Stanley, NYU, Lehman Brothers and JP Morgan Chase. He is now a consultant for the collaboration, multimedia, video and AV industries. He is also honored to serve as IMCCA’s Director of Emerging Technology. David can be reached at DDanto@imcca.org and his full bio and other blogs and articles can be seen at Danto.info.  Please reach-out to David if you would like to discuss how he can help your organization solve problems, develop a future-proof collaboration strategy for internal use, or if you would like his help developing solid, user-focused go-to-market strategies for your collaboration product or service.