A View From The Road Volume 11, Number 2

·      Some Other Keynote Comments

·      A Handful Of Announcements / Sessions 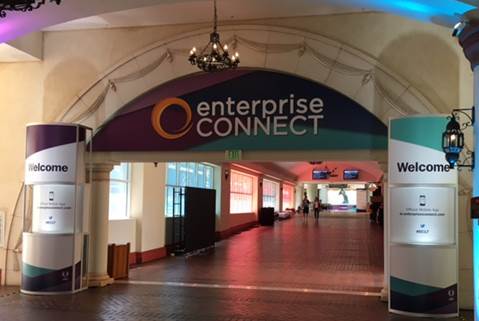 Greetings from Orlando where the 2017 Enterprise Connect conference recently concluded.  I have a love-hate relationship with Enterprise Connect.  On the one hand it is a very unique opportunity to meet with and hear from analysts and industry colleagues and see innovations announced – both publically and in private “whisper” rooms.  On the other hand it is an unusually expensive show (the Gaylord property and the show costs) with few end-user attendees (mostly analysts and industry people), and often requires dawn-to-dusk, back-to-back schedules for three to four days.  This year was no different – I’m happy I learned some things and caught-up with many great industry colleagues, but even happier that I survived the marathon for another year.  Avaya, for one, can’t claim that this year, as due to their bankruptcy filing they were non-existent at the conference.

One of the key parts of Enterprise connect is hearing and watching what some of the biggest manufacturers / service providers present at their keynote sessions.  With Avaya out of the picture, Cisco and Microsoft were the top of the list of the firms to watch – and boy, what a contrast this year.

Cisco’s keynoter was Jens Meggers – a first-time EC presenter.  While not as slick a presenter as Cisco’s past keynoters, Jen’s content blew through any issues with his style. 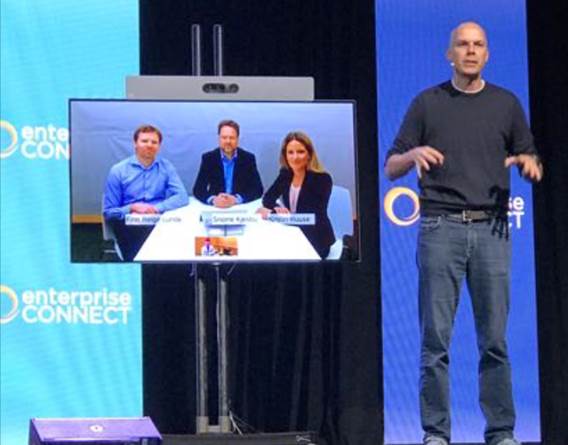 Cisco’s presentation was chock-full of innovations.  He showed-off their new Spark Room Kits – systems with solid state cameras that can perform intelligent framing, and can register to on-prem infrastructure or the spark cloud.  He then showed voice control, facial recognition (and associated metrics), whiteboarding from any device, and wrapped-up with a demo of Spark working in VR – so you could use the tools in a virtual room and collaborate with the physical world.   He made it clear that these features were either here or around the corner.

Microsoft’s Keynoter was also a first-time presenter, Ron Markezich.  Being kind to him, one can sum up the thrust of his message as ‘look at how much of our Skype for Business stuff actually works now – and well.’  He walked through sharp demos of the SfB interface, the management platform, their often announced but still not released cloud interoperability platform from Polycom, and other key telephony features.  It was clearly an attempt to show the soon-to-be-ex-Avaya users why Microsoft voice was a good choice for them.  If I didn’t want to be kind to him, I’d be highlighting how they took a decent chunk of their keynote to demo their partners’ Skype Room Systems, proudly boasting that they now had two screens, with content on one side and people on the other. 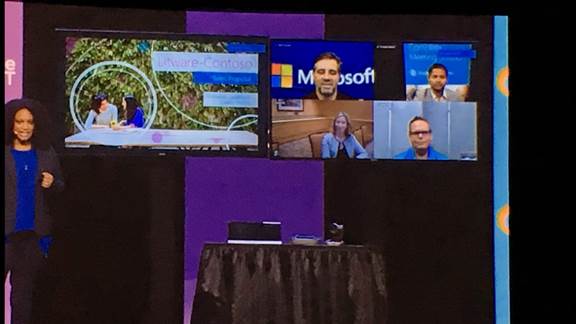 It provided the starkest contrast between Cisco and Microsoft at this conference.  Cisco showed cutting edge innovations, and Microsoft showed features that have been in the videoconferencing industry for 20+ years, with pride that they believe they’ve finally caught up.  Additionally, the enormously hyped Surface Hub unit had no part of the keynote.  It was in their booth, but not something they felt they could show-off in the keynote.

There were other keynotes too, but you didn’t miss much if you didn’t catch them:

·       Amazon Web Services gave a presentation about their new entry into the UC space – Amazon Chime.  No, wait…that was just what everyone attending wanted them to talk about.  They didn’t.  Gene Farrell, their presenter, actually said something like, ‘we just launched Chime, but I’m not here to talk about that.’  Instead they announced a new Contact Center / Customer Experience service called Amazon Connect – because, when you think great customer service – especially around the holiday season – your mind naturally turns to Amazon (?!?!?!?!)  What a lost opportunity for Chime.

·       Google spent their time on the keynote stage going through the value of team collaboration using their G-Suite applications and their recently announced Hangouts Chats For Teams.  Their presenters did not appear very comfortable with the material, often tripping over the scripted words, but honestly, the bar for Google Keynotes at EC was very low, with past appearances having no relevant content at all.  At least this time we learned about their vision of the UC space, and that was a positive change.  They also showed a cool video of their Jamboard.

And the buzzword of this year’s show was – Teams.  Teams replaces SIP and Web-RTC as the possibly (but likely not) relevant thing everyone is talking about.  This is of course in relationship to every firm’s team chat application (or Slack Killer if you prefer.)  You couldn’t spit at tis conference without hitting some firm talking about their version of team chat / workspace communications (see the video my chat with Irwin Lazar and Brent Kelly to get background on the whole team chat space.)  Some of the offerings are solid and robust platforms to consider (i.e. Cisco Spark) some of them are too new and closed to fairly evaluate yet (i.e. Microsoft Teams) and some of them are clearly just ‘we have one too’ offerings that are likely already being planned for retirement (i.e. I won’t say the name, but think of a large provider that has a track record of abandoning their offerings.)  As far as Slack itself goes, I believe they have been invited to this conference many times, but choose not to subject themselves to the public scrutiny of being asked about all their security holes and past breaches.  Industry analyst Dave Michels wrote a nice article explaining how Slack’s days of relevancy are numbered.  We may still be talking about the buzzword of Teams at next year’s conference, but then some other buzzword will replace it, relegating this space to its much smaller rightful niche.

There were a few other announcements / sessions at the show to make note of:

·       Yamaha / Revolabs introduced their first video product, the CS-700 Conference Bar.  Think speaker-bar with a video camera built in.  This is another product targeted for the exploding Huddle Room space.

BlueJeans announced that they will be using Dolby audio with all their products and services going forward.  Dolby in the past has been used inside some terrible products, where the improved audio would make no difference.  But when a high-quality, enterprise grade service like BlueJeans adds it it makes for a compelling differentiator.  There are third party cloud video services, and then there are third party could video services that are reliable and work well.  BlueJeans is clearly the latter.

·       Brent Kelly and Phil Edholm again presented their very popular Cisco vs Microsoft comparison session.  Their two key points of contrast (in my opinion) were showing that Microsoft in both their SfB stack and in their new Teams application are  difficult to impossible to use with those outside of the user’s enterprise, and there is no way to have a pure Microsoft solution for all collaboration including rooms.  If ‘One Throat to Choke’ is a requirement, Cisco is the only option.   (These were their points, not mine, so while I agree 100%, reach out to them if you object, not me.) 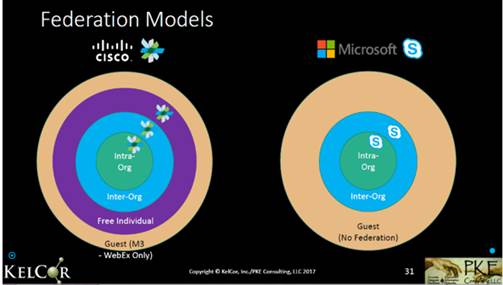 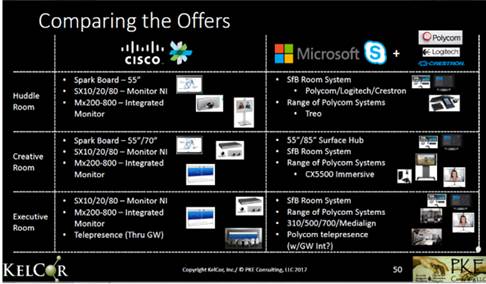 ·       I predicted in my blog two years ago on videoconferencing camera technology that we were on the verge of image sensor arrays so powerful that pan-tilt-zoom cameras would soon be going away.  Altia System’s Panacast 2 released their Intelligent Framing technology a few months ago (and spoke about it on a panel here at EC) and Cisco introduced their version of Intelligent Framing in their new Spark Room Kit codecs at this conference.  It is only a matter of time before all of the videoconferencing manufacturers follow.  RIP-PTZ.  All other camera and codec manufacturers are squarely in catch-up mode. 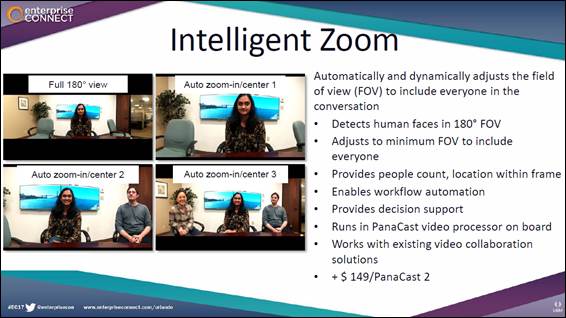 That’s it for this edition of A View From the Road from Enterprise Connect.  My next update usually comes from both NAB and Interop, but Interop dropped its coverage of video and collaboration this year.  (Kudos to InfoComm for picking up the opportunity to present a full Emerging Trends day covering all emerging technologies including collaboration.  I will be an honoree and presenter along with Brent Kelly, Irwin Lazar, Ira Weinstein, Tim Banting and many others.  See the press release for that event here and register for the entire InfoComm program here.  Come see us in Orlando in June and not only get to hear some great presentations, but join us for extended discussions in the Emerging Trends Lounge.)  I will also be briefly attending NAB this year and will publish a commensurately brief update afterword.

This article was written by David Danto and contains solely his own, personal opinions. David has had over three decades of delivering successful business outcomes in media and collaboration technology for various firms in the corporate, broadcasting and academic worlds - including AT&T, Bloomberg LP, FNN, Morgan Stanley, NYU, Lehman Brothers and JP Morgan Chase. He is now a consultant for the collaboration, multimedia, video and AV industries. He is also honored to serve as IMCCA’s Director of Emerging Technology. David can be reached at DDanto@imcca.org and his full bio and other blogs and articles can be seen at Danto.info.  Please reach-out to David if you would like to discuss how he can help your organization solve problems, develop a future-proof collaboration strategy for internal use, or if you would like his help developing solid, user-focused go-to-market strategies for your collaboration product or service.