A View From The Road Volume 10, Number 4

Greetings from Las Vegas, where I’ve just attended LDI – the staging and lighting exhibition.  Honestly, it seemed less like a product showcase and more like a recreation of Cheech & Chong’s Up In Smoke.  This conference has always filled the exhibition space with smoke and fog to show off the lighting, but it was way over the top this year. 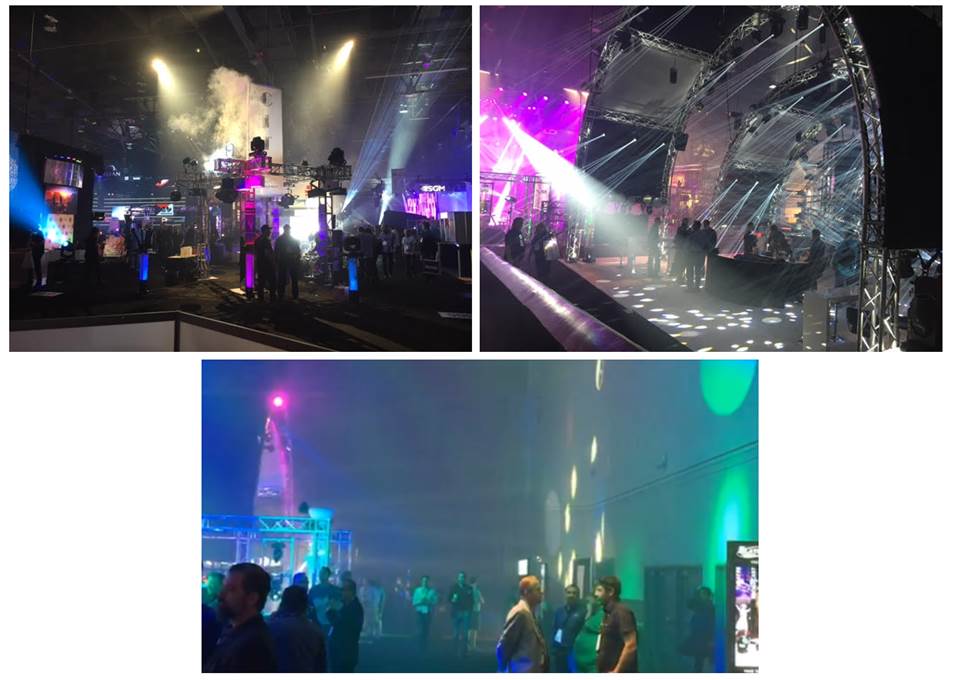 If you click the picture above you can see a brief Instagram video of what it was like walking in the central hall.  Not only was the smoke so overwhelming that you couldn’t see 50 yards ahead of you, it poured outside the hall doors and filled the convention center.  I empathize with the exhibitors and LVCVA employees that had to live with this for the whole event.

There was nothing revolutionary at the conference this year.  In speaking with other industry analysts on-site we all agreed that this expo really only contained incremental updates to technology.  LED instruments are brighter, more efficient, run cooler, etc.   There were also a few instruments like the one from SGM below that are now completely waterproof (click the picture to see the brief video.) 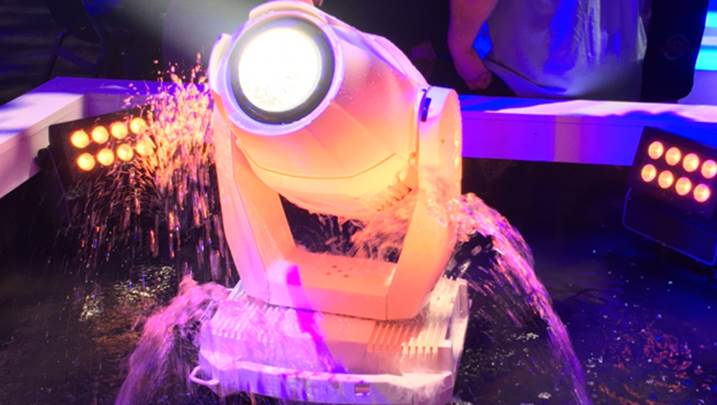 It was also obvious that the lines between stage lighting and digital signage are blurring.  At least a third of the exhibitors were showing videowalls, video curtains, digital projection mapping and the like.  All showing pretty images (including one from HavaVision that was in polarized 3D) but nothing really new there either.

My last image from this event - an exhibit from a stage company with a life size Rock-Em Sock-Em Robot arena (again click for video) sums-up the whole conference nicely:

It was visually spectacular, fun to watch, but you learned little about the products and there was really nothing new here.

While I was flying out to LDI I had a hard time sending Tweets from the WiFi on the airplane.  I thought it was just the typical lousy United service, but then I found out that while I was in the air the internet was being attacked by one of the largest distributed Denial Of Service attack in history. 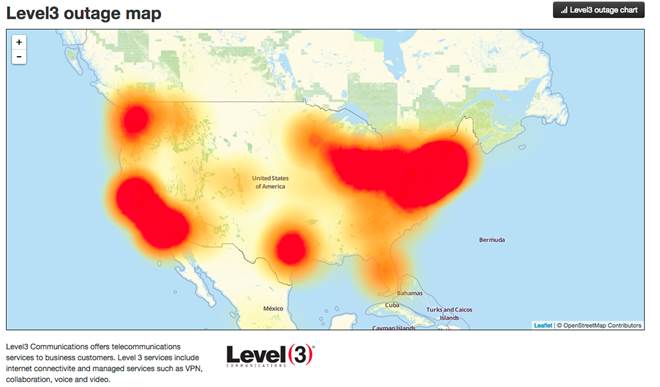 Unknown nefarious forces used your webcams, DVRs, smart light bulbs and the like to organize the attack.  According to the reports, “…the botnet attacking Dyn was built with the same malicious software that launched an attack against Krebs and French website OVH -- the two most powerful DDoS attacks on record. Called Mirai, the malware works by ‘enslaving vast numbers of these [IoT] devices into a botnet, which is then used to conduct DDoS attacks.’ " Just last week I discussed the probability of this happening on my AVNationTV webcast Connected! Everything IoT (which is well worth the half-hour watch.)  Until manufacturers begin making these devices capable of managing stronger security and consumers take security seriously these attacks will continue to be a serious risk – to medical devices, self-driving cars and a whole bunch of other IoT things.  Don’t say you haven’t been warned…

For the last couple of years industry analysts and consultants have been talking about digital disruption.  New technologies have allowed new business models to be created.  Uber, AirBnB, and similar firms have challenged established businesses by leveraging these technologies.  While this disruption will continue, I believe it has passed a tipping point.  Instead of trying to convince organizations that the change is coming, most of them are now trying to figure out what to do – they’re trying to figure out how to pivot.  “The Pivot” means trying to adapt your processes, products and/or strategies to the new realities of the world.  For many, this is going to be no small challenge.  In the collaboration space, we thought the change was going to be from hardware to software – which I’ve said for years is more debatable than most people think.  Instead however, what has actually happened is the cost of that hardware has plummeted.  Even if an organization is committed to room-based hardware for its inherent robustness and stability, the cost basis will force a change.  When one can buy a good room video system – something that used to cost in the tens of thousands (if not the hundreds of thousands) of dollars - for what is now around two thousand dollars, the impact on users, resellers and manufacturers will be severe.  Users will have to reevaluate their purchasing strategies – both for technologies and consumption models; resellers will have to find new ways of driving margins and profits; and manufacturers will have to reevaluate products that are just too expensive to survive.  If you personally haven’t thought how you and/or your firm will make the needed pivot I suggest you start as soon as possible.  Rest assured that people who believe that they can maintain the status-quo will not survive for long.  I can’t possibly stress this new reality enough.

With the end of the year close on the horizon I usually take the time in my last IMCCA blog of the year to look at what has happened in the industry and try to make some predictions about general trends.  Here is what I see happening in the next 12-18 months.

·       The cost of hardware will continue to plummet – and these less expensive systems will soon be remotely manageable by enterprises and service providers.  When a two thousand dollar room system has all the features of one for ten thousand and up, it will be very hard to sell those more expensive systems.  Manufacturers and resellers are going to have a hard time making the pivot as I mentioned above.

·       The concept of “Business Grade Collaboration and Communication” will expand in relevance.  It’ll no longer be enough to be able to send text messages or instant messages from any device.  Firms will be looking for the ability to go to any device and pick-up where they left off – continue the conversation and/or project started on a desktop when moving to a mobile device.  Look for collaboration manufacturers and service providers to begin to stress this idea.

·       The explosion of “huddle room” technology will continue.  I’m personally aware of five new devices on the brink of hitting the market.  The war in this space is far from over.

·       The Interactive Whiteboard space is again going to heat up.  I’m on the record stating how these devices are really only useful in a very few circumstances, but my opinion isn’t going to prevent more products from hitting the market.

·       Video displays – for the home and the enterprise – are getting much bigger and much less expensive.  I’ve seen 90+” direct view flat panels with excellent UHD images that will be hitting the market soon.

LDI usually represents the end of the conference season for me, but this year I’ll be presenting at one more – the combined InfoComm Connections / NAB New York.  I prepared the content for the Collaborate sessions and will moderate two of the three.  Please join us if you’re in the area.

That’s it for this edition of A View From the Road.  My next update will be after the CES 2017 – where I was proud to have been selected as an Innovations Judge again this year.

This article was written by David Danto and contains solely his own, personal opinions. David has had over three decades of delivering successful business outcomes in media and collaboration technology for various firms in the corporate, broadcasting and academic worlds - including AT&T, Bloomberg LP, FNN, Morgan Stanley, NYU, Lehman Brothers and JP Morgan Chase. He now works with Dimension Data as their Principal Consultant for the collaboration, multimedia, video and AV disciplines. He is also the IMCCA’s Director of Emerging Technology. David can be reached at David.Danto@Dimensiondata.com or DDanto@imcca.org and his full bio and other blogs and articles can be seen at Danto.info. David is also the co-founder of Masters Of Communication.  Please reach-out to David if you would like to discuss how he can help your organization solve problems, develop a future-proof collaboration strategy for internal use, or if you would like his help developing solid, user-focused go-to-market strategies for your collaboration product or service.