A View From The Road Volume 10, Number 2

·      Collaborating With Silicon Valley Via InfoComm

After the relative industry quiet of February, March comes in like its proverbial lion with industry activity.  And apparently, it’s all about connecting.  InfoComm’s bi-annual roadshow for (mostly) non-members – InfoComm Connections - took place in San Jose on March 3rd and 4th.   Then, just a week later, Enterprise Connect – The former VoiceCon – took place in its usual spot – the horribly overpriced Gaylord Palms in Orlando.  With all that connecting going on you could correctly bet that there was a lot of news to talk about. 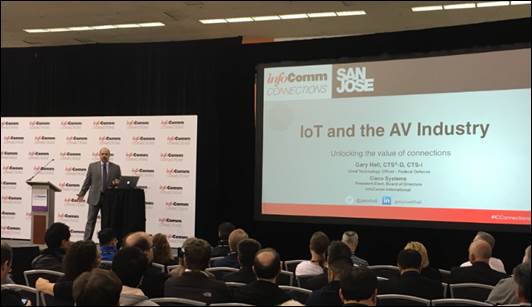 Gary Hall, the President-Elect of InfoComm’s Board of Directors, opened the San Jose event with a compelling presentation that explained why the Internet of Things (IoT) will change everyone’s lives – including the AV and multimedia industry.  If you were not aware, our machines are already speaking with each other (as I discussed in my coverage of this year’s CES conference.)

With all these devices clearly now “network endpoints,” the issue of AV security came up for a much needed rousing debate as part of the IMCCA’s Collaborate Seminar that took place within Connections.  In the first session Hisham Abdelhamid from Cisco, Steve Alexander from Crestron, Robert Haley from Compunetix, Philip Langley from Harman and Josh Srago from Teecom joined me to discuss it.  We all agreed that the recent news of a ‘backdoor’ found on an AMX control system didn’t really represent a specific breach or threat, but represented an endemic lack of security on all integrated AV systems. 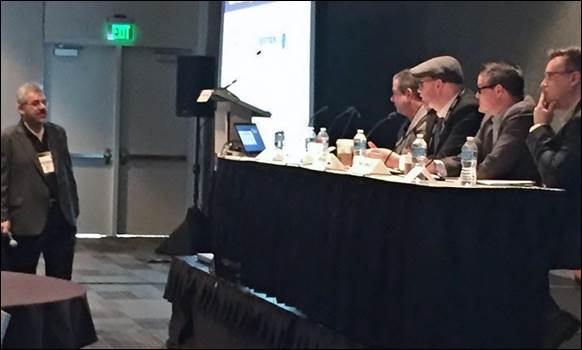 Unless the AV industry (manufacturers, associations, users) accept that the days of ‘install it and forget it’ are over, and we take specific steps to develop regular update/patching processes for the industry, AV will become the soft target for all malware to gain footholds in the enterprise.  One person in the audience stood up and pointed out that on a scale of 1-10, where our panelists thought everything was a 7.5, he thought it was a ‘House on Fire’ 10.  (I tend to agree, as I pointed out in episode 5 of my webcast Connected! Everything IoT which was recorded at this event.)

After that session we spent time focusing on the very hot issue of Huddle Rooms – what they are, what they aren’t and what they should be.  Expect this to be an exploding space at InfoComm in June this year.  (I’ll of course be there with my Dimension Data and IMCCA colleagues presenting the IMCCA sessions on UC&C.  Here’s how those went last year.  Reach out if you need a free pass.)

We also spent time on the nuances of collaborating in Silicon Valley – what makes it different, unique, strange – perhaps all of the above.  This was the IMCCA’s first panel discussion with content dedicated to a specific region.  I can’t wait till November when we do “Collaborating on Wall Street.”

After about 20 hours at home to do laundry I was off again - this time to Orlando and Enterprise Connect. 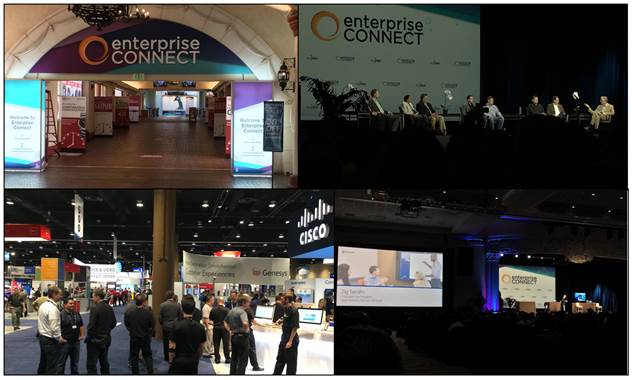 When talking about this conference I always like to refer the old joke about going to a fight and having a hockey game break out.  This show used to be called VoiceCon – all things enterprise voice – until video and collaboration broke-out in a bit way and they had to change.  This year the show was under the guidance of a new General Manager – Eric Krapf – who did a great job of keeping things organized and focused in his first year.

The seminars had some very rich content – with some jaw-dropping metrics.  One in particular was represented on this slide presented in the ‘UC Market Disruption: What's Real and What's Emerging’ session: 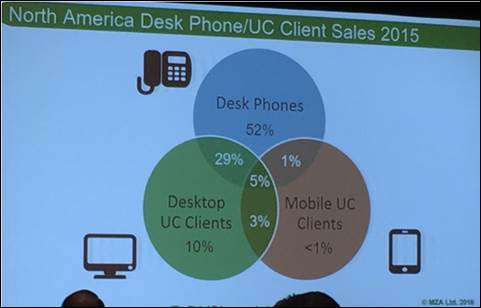 If I read that right it means that less than 20% of all (+100 person) UC sales in North America are using soft clients, and over 80% are still using hard desk phones.  I found that stunning in light of all the hype about ‘throwing out your phones’ we’ve heard over the last few years.  Apparently less than 20% of us are buying into that.

There were a lot of announcements and even more market positioning that took place there.  Some highlights include announcements from Cisco about the next generation of their Spark cloud service, Announcements from Microsoft and Polycom about “Project Rigel”, and a new product kit from Logitech that includes the PC and lets users pick the UC service they want to use. 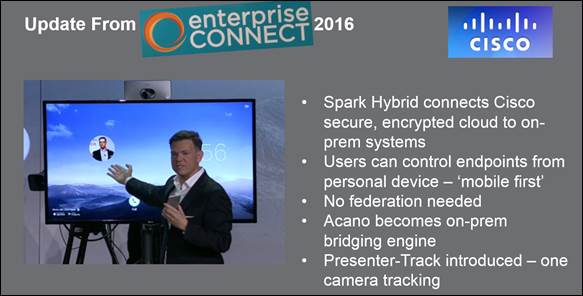 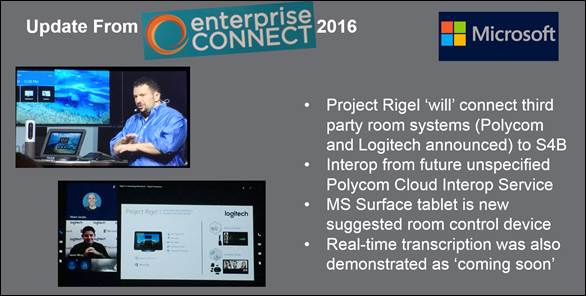 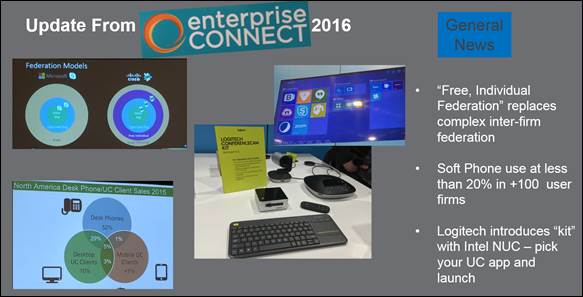 I have lots of opinions about what I saw and heard, but as I pointed out to another analyst recently, Microsoft and Cisco are religions, not technologies, and no one really ever willingly converts.  You can find good things and bad things in all of the announcements depending on which firm’s alter you worship at.  (If you really do want an agnostic opinion feel free to send me a note and I’ll be happy to privately detail my thoughts.)  About the only opinion that wasn’t controversial was that Google blew their keynote opportunity – for the third year in a row.  People are genuinely interested in Google’s thoughts about where collaboration is headed, but instead of finding out anything about that Google presented a panel discussion with partners this year.  Really?  A Keynote panel discussion?  Nothing on new services, ecosystems, planned Alphabet technologies?  All that cool stuff and instead we get a chat?  Everyone I spoke with was disappointed.

That’s it for this edition of A View From the Road.  My next update will be in June after InfoComm.

This article was written by David Danto and contains solely his own, personal opinions. David has had over three decades of delivering successful business outcomes in media and collaboration technology for various firms in the corporate, broadcasting and academic worlds - including AT&T, Bloomberg LP, FNN, Morgan Stanley, NYU, Lehman Brothers and JP Morgan Chase. He now works with Dimension Data as their Principal Consultant for the collaboration, multimedia, video and AV disciplines. He is also the IMCCA’s Director of Emerging Technology. David can be reached at David.Danto@Dimensiondata.com or DDanto@imcca.org and his full bio and other blogs and articles can be seen at Danto.info. David is also the co-founder of Masters Of Communication.  Please reach-out to David if you would like to discuss how he can help your organization solve problems, develop a future-proof collaboration strategy for internal use, or if you would like his help developing solid, user-focused go-to-market strategies for your collaboration product or service.