Greetings from the 2014 LDI Conference in Las Vegas.  This is the 27th annual conference on staging, lighting and visual technologies and effects.  It’s also the conference where they pour so much smoke and fog into the convention center (to see the lighting effects more dramatically) that they have to pay extra to disable the smoke detectors and have fire-watch guards on duty.

One of the interesting things about visual technology is that it defies categories – and always has.  A device built for theater can be used in television and corporate video, a production light works well in collaboration settings, etc.  By staying on top of the technology in one niche you can get a heads-up on alternate and future uses.  So my highlights below are by no means a detailed report of what was shown at the conference, but rather a taste of the devices and hidden gems that can effectively cross-over.

One type of device that cuts across all categories is video cameras.  It was great to catch up with Ed Ellet and the team at Vaddio.  Ed used to run the endpoint business at Polycom (in the early 2000 – when there was none better.)  After a few stops along the way he took over as President and CEO of Vaddio earlier this year.  I didn’t get a chance to congratulate him in person at InfoComm in June, but at this smaller show I had the time to chat with him and his sales manager Tim Henry.  They were here at LDI showing off their outstanding Shot Family of cameras. 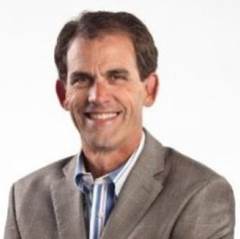 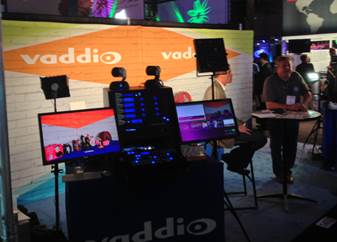 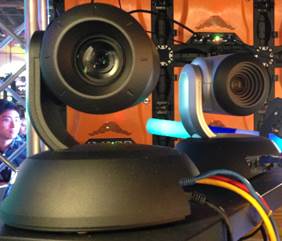 They have RoboSHOT models for broadcast and conferencing, ZoomSHOT for use in large venues where PTZ is not needed, and WideSHOT with a very short focal length lens to get maximum coverage in tight spaces.  I hear from the engineers at Vaddio that they love these cameras, and that Ed’s leadership and experience has already had a great impact on their people and processes.

I’ve reported before about how the emergence of LED lighting has been a revolution in production environments.  The reductions in power consumption and heat generated (and therefore air conditioning needed) represent an enormous cost savings over what had been used previously.  I won’t break down the dozens of great robotic theatrical lighting instruments shown here – as now this is the de-facto industry norm.  I will point out one new entry in the small lighting instrument area that highlights just how far the technology has come.  A firm called Gantom says they produce the “world’s smallest LED spotlights” – and I believe them.  The pin-spot shown below has a street price of about $100 and is the most powerful light at that price and size I’ve ever seen. 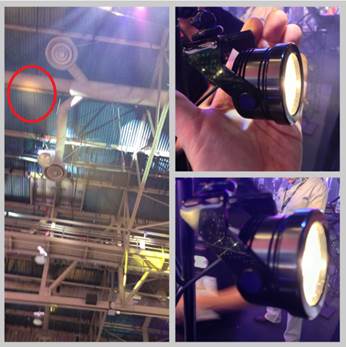 The circle of light I’m highlighting on the left was produced by one LED aimed at the ceiling of the convention center – about a 50 foot throw.  The owner of the firm tilted the light down and showed me a similar tight beam about 100 feet away.  All this coming from a cool instrument about the size of a hockey puck.  They have a number of tiny lights that can show logos and shapes and solve all sorts of problems. These are definitely good to know about for many applications.

I was also very impressed with the product offerings from Glow Motion Technologies. 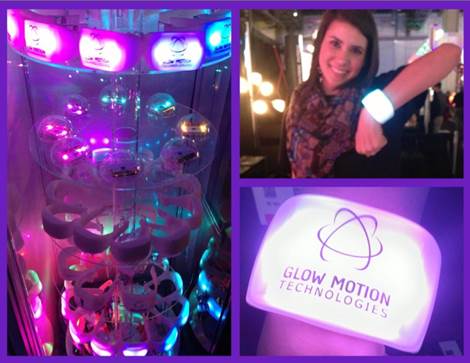 They make small, battery operated light-up devices like wristbands, lanyards, glasses, etc.  What makes them special is that they are wirelessly controllable and individually addressable.  Imagine a hundred-thousand people sitting in an audience at a venue each wearing an RGB light, and each of the hundred-thousand individually DMX addressable.  It would be a virtual palette for art, moving images, show effects, etc.  You can also use them to pick contest winners (i.e. everyone lighting-up in blue head down to the special area to collect.)  This opens-up a lot of possibilities.

It’s not news that manufacturers are turning to apps to do the jobs that used to be reserved for dedicated hardware.  Another example of this at the conference I hadn’t seen before was the Green Go Intercom virtual beltpack. 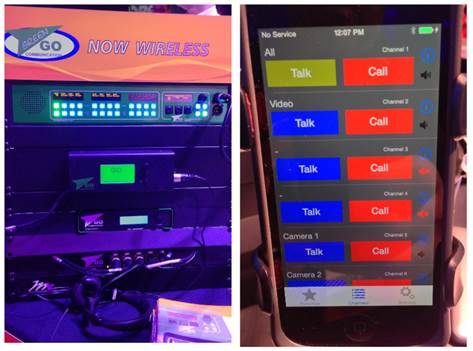 The iPhone app - free to download in the iTunes Store - makes the full capacity of Green Go’s beltpacks or table stations virtually available – that’s 32 full duplex channels, 250 groups and 3000 users.  Expect to see apps replace beltpacks across the space in the near future.

My last highlight from this conference is also showing off the use of a smartphone app to replace a hardware product – but in this case the hardware is not electronic.  It is sadly time to say goodbye to an industry standard – the gel color swatchbook. 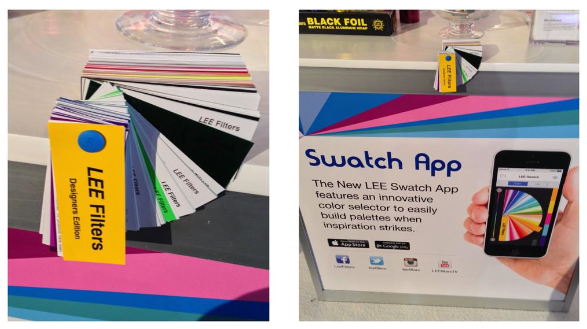 Above is the dejected swatchbook sulking over the sign announcing Lee Filter’s new Swatch App.  While it seems like a handy way for lighting professionals to find the right colors (and a way to empty out the bottom drawers of a number of television and theater professionals) it strikes me that unless you can hold the filter up to the light source (in the epic words of Monty Python) “it’s hardly a bloody replacement then.”  This one may be jumping the gun a little bit as far as the move to virtual goes.  When the app can mix RGB LEDs mounted in the device to produce the actual of color of light chosen – then maybe they’ll have something.

For this year all the tweets, pictures and news items from LDI 2014 are being archived on an Eventiflier website.

This is the final View From The Road for 2014.  This year comes to a close with a number of exciting announcements in the collaboration space:

·       Microsoft announced that they are abandoning the Lync name they worked so hard to credibly establish in the Enterprise UC arena, and replacing it with “Skype for Business.”  While one can understand any firm’s desire to embrace consumerism in the technology space – this is a questionable decision.  When you devalue what has become a strong brand and replace it with one that represents “free, unstable, non-professional” technology – well let’s just say that any branding decision a firm makes that has their competition celebrating isn’t a good one.

·       Cisco announced a new immersive telepresence system – the IX5000 – that represents improvements in every immersive category – better quality, lower price, lower needs in electricity and bandwidth, more features, and shorter install time required.  With the hypestorm around telepresence long passed, immersive systems are only needed in very select circumstances – but when appropriate this one is clearly a winner.

·       Cisco also announced Project Squared – a persistent, virtual meeting room that holds chats, documents, media, presentations and can connect participants live.  It sounds very much like a cloud based version of Acano CoSpaces, which sounds very much like Unify’s Circuit.  I guess the take-away here is that persistent, virtual rooms are either a fad or the next generation of collaboration – we’ll have to watch.

·       W3C announced a potential agreement to have VP8 and h.264 required in WebRTC – which is being hailed as the compromise that launched a thousand blogs on social media - speculative, incorrect blogs claiming WebRTC is finally here - but thousands none the less.  I’m not sure how analysts and supporters can make the leap in their minds from potential agreement to done deal even while only one browser supports it in beta and none of the member firms have ratified the suggestion.  It’s another one where we’ll have to watch what happens.

That’s it for this edition of A View From The Road and for my coverage of industry conferences in 2014.  I wish everyone a joyous and peaceful holiday season and a new year full of health and happiness.  Look for my next View From The Road in mid-January - reporting on technology trends from the 2015 International CES.  In-between these reports and my blogs you can always count on up to date industry news by following me on Twitter: I’m NJDavidD.  I’ll also be appearing on a discussion panel about UC and Collaboration deployment best practices hosted by Wainhouse Research and Logitech on December 17th.  Registration is free.