When InfoComm 2014 came to a close late last week it left attendees in something of a quandary.  Many I spoke with were unimpressed by the technology shown in Vegas this year, with one commentator even calling it an Evolution, not a Revolution.  While I can understand the sentiment – with few if any “wows” being shown by exhibitors - what became clear to many of us was that the wow definitely was there, but in a slightly different way.  After years of just accepting the status-quo in AV, the end-users were at this show - with an army - staging their own “we’re not going to take it anymore” protest that was most definitely nothing short of revolution.  The only reason some might not have noticed was that parts of the AV industry have done such a great job of ignoring end-user’s needs for so long that many industry stalwarts can’t even hear them anymore.  But they were there – in force – staging quite the revolution I assure you.

This was the 75th anniversary of InfoComm, and with record attendance (of nearly 40 thousand) and a stellar line-up of exhibitors it was a fantastic conference and exhibition in many ways both large and small.  And as long as I’m speaking about the large and the small it was clear we had both covered with Microsoft this year.  Microsoft was very big news earlier in the year – a first time Platinum sponsor of the show – representing at least a tacit acknowledgment from the IT and software centric world that AV actually existed.  In a million years one could never have predicted the utterly and abysmally embarrassing presence Microsoft turned out having at the expo.  Tweets from those attending covered it in phrases such as “vast wasteland”, “desert”, “waste of money” and “where’s Waldo.” 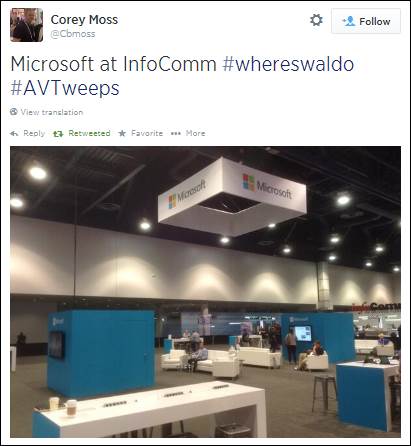 Let the pictures above speak to the stark contrast in Crestron’s booth (arguably always the busiest) and Microsoft’s.  It was a huge, carpeted space with a couple of displays, a sofa or two and some Surface PCs…oh, and space – let’s not leave out the vast areas of open space.  Most in attendance were either surprised or offended by Microsoft’s uncaring attitude toward those that chose to carve-out precious time to attend this conference looking to learn about products and solutions.  In reality it probably speaks volumes about how disjointed a firm it is in that its communications people don’t even show up at the world’s preeminent communications conference.  I guess there may have been some fear in Redmond that Gurdeep Sing Pall’s “Era of Universal Communications” shpiel wouldn’t cover it when there are actual communication experts in the room.

In reality however, this year’s InfoComm wasn’t primarily about any of the exhibitors – it was about the attendees.  The Unified Communications and Collaboration Solution Summit (co presented by InfoComm and The IMCCA) showcased ten sessions that were wall-to-wall packed with people representing end-user organizations.

For the most part this group was tired of the “hang and bang” AV dealers shoving thirty year old, expensive AV solutions at them.  They came to this show to speak-up about the need to view collaboration in the context of their entire communications ecosystem.  I covered this topic in another blog with my initial reactions to InfoComm 2014, so I won’t go into too much of it again here, other than to point out that the emergence of this theme – that the user experience is the key to communications and much more important than any technology – is as revolutionary as any past theme to emerge at any past InfoComm conference.  Even InfoComm Executive Director and CEO David Labuskes was quoted as saying that in order for the AV industry to remain relevant we have to “accept the change…[including] seeing a greater dependence on collaboration and communications.”

As for the exhibitors and the technology shown, there were a few stories worth mentioning.

·         As we’ve all been reading recently, the conferencing world has gotten quite a bit cloudier, with the latest news being Lifesize reinventing itself into a cloud services player and ClearOne merging a few individual acquisitions into an interesting cloud suite offering.  Everyone is dubbing themselves the “BlueJeans killer” which kind of makes me wonder when we’re all going to stop and give BlueJeans the deserved kudos for waking up and steering the industry.

·         About one out of every three exhibitors was showing their own “easy to use” interactive display, which for the first time included Smart and their new Kapp (which I’m still trying to figure out if I should take as a positive or negative step in that they’ve finally acknowledged all their other stuff is way too complicated.)  If I’m making the saturation of this technology sound boring then I apologize.  Here’s a picture of one of the interactive displays being used to play Candy Crush Saga, which seemed to amuse this exhibitor when he felt his product was too boring. 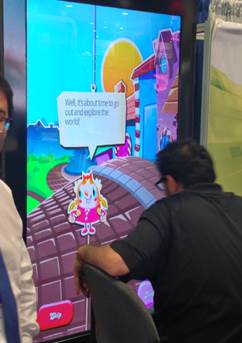 ·         4K / Ultra HD was all over the place on the exhibit floor.  And while I give kudos to Vidyo for the first 4K soft room solution and Crestron for developing the first 4K end-to-end certified solution for AV there are still thousands of AV users not even using HD and still thousands more that think Skype is good enough god help us!  A full 4K lifecycle is just showing off that you got an A on a test that everyone else got a C on.  We already know you’re the smartest kid in the class, now stop blowing the curve for the rest of us. 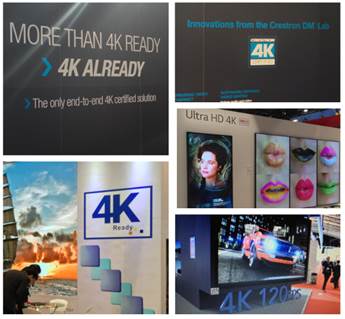 ·         One important story to come out of InfoComm is Dante.  Jokes about the word-play on my name aside, Audinate’s Dante is a digital media networking standard that delivers low latency, high quality sound over standard IP.  It is newer and better than Cobranet and less pie-in-the-sky than AVB.  A whole host of firms have signed-on to using the technology.  It seems to be a useful solution from the most complex audio challenges down to when you want to send a microphone signal from a conference room table over an existing network path.

·         Does the name Diamond Rio mean anything to you?  While there may not be any Rio players left today, they and the RIAA lawsuit against them forever changed how we consume and listen to music.  That’s what comes to mind when I look at the Array Telepresence product shown at this year’s expo. (Readers of my Top 10 Disruptors quarterly newsletter are already familiar with Array.  Now really, is there any reason not to follow the link below and send me an email to sign-up for the free newsletter?)  Array is the first manufacturer to process small video cameras through a “black box” that manipulates the image into something different than the optics alone produce.  They are using it to create the experience of an immersive telepresence room in a standard rectangular rom with a standard rectangular table placed perpendicular to the screens.  If you can’t picture that then go to their website and look at the detailed explanation and photos.  I predict that in five to ten years this external processing will be the norm in the video collaboration industry.  Just as your music is now on an iPod and not a Rio, it may be floor to ceiling walls of video displays with fiber-optic cameras strung back to a processor, all put together in a way that simulates two sides of a clear piece of glass.  Or it may be something else entirely.  There is however no dispute that Array is the first. 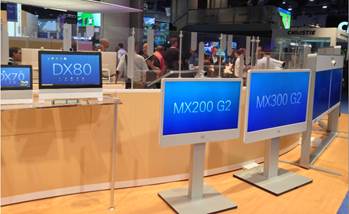 Last but not least, Cisco (who showed their impressive line-up of new, modern collaboration endpoints at the conference) used the opportunity to kind-of, sort-of let slip that they kind-of, might have been a bit…let’s say…WRONG on the whole ’everyone that wants to be interoperable with us will have to follow our standards’ thingy.  In a blog post timed for the expo they indicated that “…to solve our customers challenges Cisco has decided to expand our industry leading interoperability to include two way content sharing with Microsoft Lync 2013…”  I’m sure that once they get this software change to the market they’d like you to forget all about those silly Pexip and Acano guys, not to mention those nasty BlueJeans you shouldn’t wear.  Unfortunately (or fortunately – depending upon your perspective) it’s gonna be impossible to put that genie back in the bottle.

That’s it for this edition of A View From The Road.  Stay tuned as the rest of my conference travel year solidifies.  I’m always happy to share the insights that not everyone always sees.

This article was written by David Danto and contains solely his own, personal opinions. David has over three decades of experience providing problem solving leadership and innovation in media and unified communications technologies for various firms in the corporate, broadcasting and academic worlds including AT&T, Bloomberg LP, FNN, Morgan Stanley, NYU, Lehman Brothers and JP Morgan Chase. He now works with Dimension Data as their Principal Consultant for the collaboration, multimedia, video and AV disciplines. He is also the IMCCA’s Director of Emerging Technology. David can be reached at David.Danto@Dimensiondata.com or DDanto@imcca.org and his full bio and other blogs and articles can be seen at Danto.info. Please reach-out to David if you would like to discuss how he can help your organization solve problems, develop a future-proof collaboration strategy for internal use, or if you would like his help developing solid, user-focused go-to-market strategies for your collaboration product or service.