A View From The Road Volume 7, Number 5

Greetings from the 26th annual LDI show in Las Vegas.  This is the 2013 edition of the conference on staging, lighting and visual effects.  Because it is mostly a visual show I’ll let the picture highlights do most of the describing in this report. 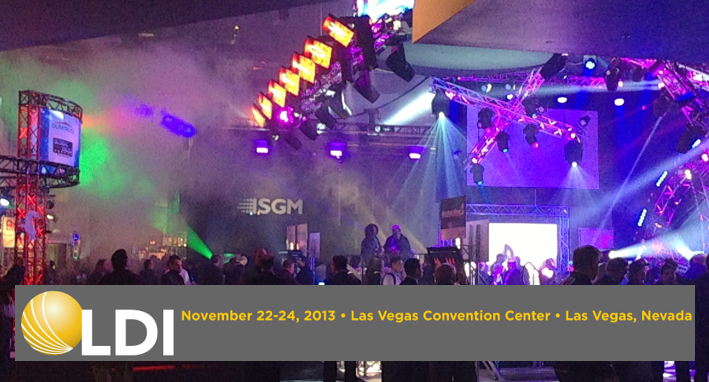 This year’s conference can be summed-up in three letters – L E D.  It’s very clear at this point that LED lamps and LED powered lighting instruments are completely taking over the professional lighting space.  The technology is better than it’s ever been, and the benefits of low power usage, minimal heat output and very long life are still very compelling factors.

GE was at the conference showing-off how many lamps that that used to only be available in incandescent versions are now made using LED technology. 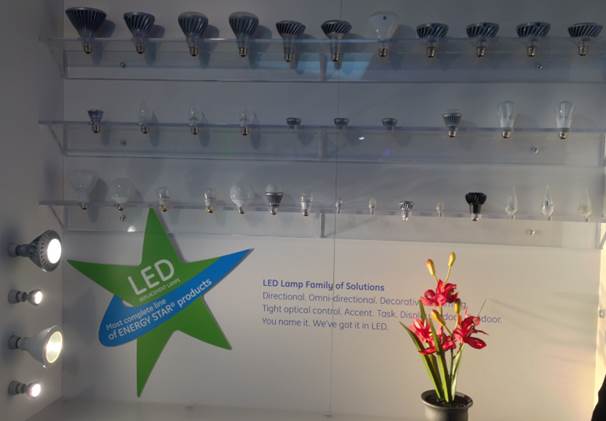 What I found interesting though is how the line between lighting instruments and video displays is continuing to blur.  Just look at these devices from KSZLED.com. 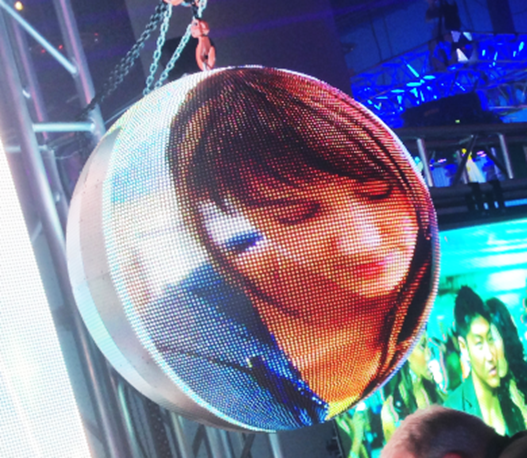 Speaking of odd-sized displays, the Da-Lite screen company was showing-off its ability to create custom screens in any size and shape. 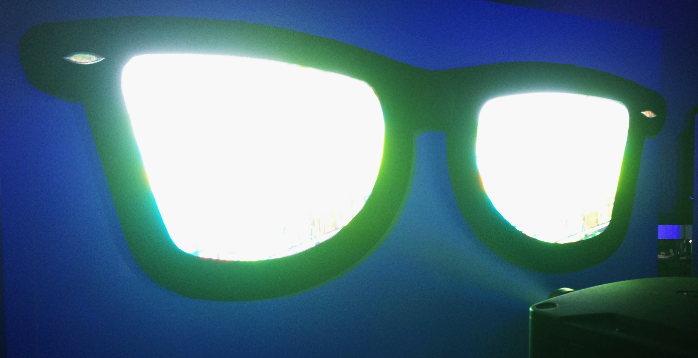 Their design center will create projection surfaces in any shape, as shown here in the form of huge glasses.

There were a couple of new, portable light instrument / systems at the show that are worth mentioning in the context of easy set-up for both temporary productions and production grade lighting additions to existing non-stage locations (offices, homes, etc.)

Fuel Lighting showed some new versions of their Angle Light system.  Each instrument is battery powered and attaches to almost anything with a super-powerful magnet.  These could be set-up in someone’s office in minutes - without needing electrical outlets.  They can be assigned to any of six wireless dimming channels for control, and then they also could be removed rapidly leaving no trace of disturbance.

Rosco Labs (known for years as the preeminent manufacturer of gels and filters) was showing their full line of Miro Cubes. 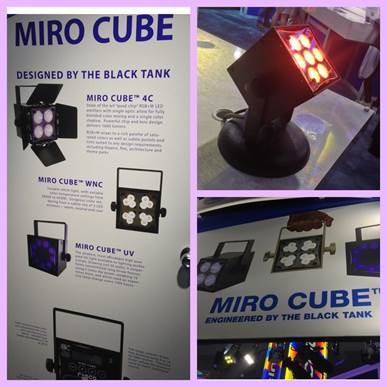 These are a series of LED wash lights that output more than 3000 lumens from a compact 4 inch cube. They also do not require expensive external power supplies or ballasts – each unit plugs directly into the wall anywhere in the world, automatically adjusting to power sources from 90-240vAC, 50-60hz. And because each cube draws less than one half an amp of current, more than 40 MIRO CUBES™ can be plugged into a single 20A circuit.

Finally, I saw some interesting luminescent strips made by a firm called Light Tape.  They are not new but this is their first time at LDI.

They are able to produce this material in multiple colors and to multiple lengths.  It is already in use by multiple firms in the aviation, theater and motion picture fields.  I see it has having multiple purposes from enhancing digital displays to assisting with safety in darkened areas.

Moving on, in New York this past week InfoComm and the IMCCA held the inaugural “Collaborate” networking and educational event for industry end users. 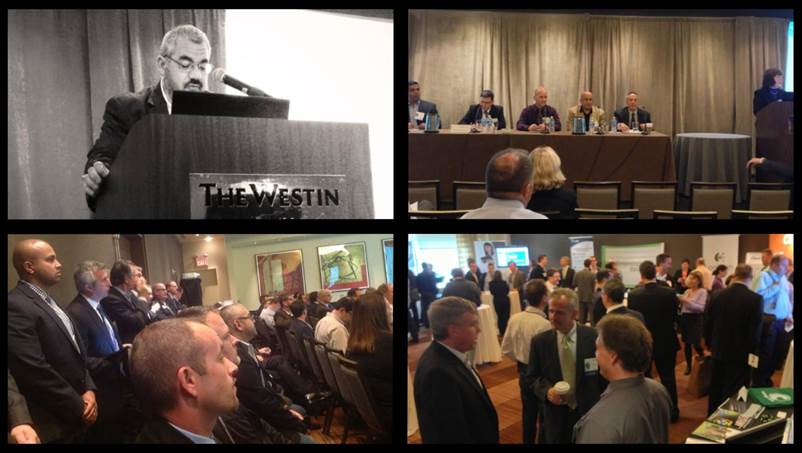 A hundred or so attendees were expected and more than double that came to the Westin Times Square to discuss the latest in industry technology and news.

The program included some terrific case study presentations from Gary Schmid of the New York Power Authority, Marc Cooper of Citigroup's Technology Architecture Group, and John Tichenor of Chadbourne & Parke LLP.  Each gave their perspective on how they are handling their firm’s UC and Collaboration challenges.  The program also contained a panel discussion moderated by the IMCCA’s Chairman Emeritus Dr. S Ann Earon which included Anthony Diaz-Matos of BlackRock, Howard Sebold of NYSE Euronext, David Nebral of Fidelis Care, Mike Cuccio of Ralph Lauren and Steve Bleiberg of J&J discussing their thoughts on the direction of industry trend and how their firms are planning to adapt to them.  As was hoped, the discussion developed into a conversation not just amongst the panelists but included the standing-room only attendees.

At the conclusion of the conversation (and the award of a $50 gift card, a Kindle Fire and Logitech iPad keyboard to the attendees who most utilized Social Media that day) everyone enjoyed cocktails and hors d'oeuvres while visiting with the events sponsors (AVI-SPL, Cisco, ClearOne, Compunetix, Crestron, Dimension Data, Logitech for Business, MyVRM, Polycom, Teliris, Video Corporation of America, Vidyo, Williams Sound and Yorktel.)

In giving an interview for media coverage of the event, I explained, “Certain regional areas of the US contain very unique communities of interest in collaboration technology.  New York - for one - has needed a formal, independent end-user networking event for a very long time.  Meeting under the banner of InfoComm and the IMCCA – two vendor neutral non-profit organizations representing the highest levels of integrity - was an incredible opportunity for end-users and industry professionals to discuss industry happenings without any hard-sell or implied obligation.  The connections made today will prove very valuable to the attendees for many years to come.”

Carol Zelkin, the Executive Director of the IMCCA, explained that she was “ecstatic” about the response to the event.  “Not only will we have another one in New York, but we are working with our colleagues at InfoComm International to plan a series of these ‘Collaborate’ events at multiple locations in the near future.”

That’s it for this View From The Road.  My next show review will be from the 2014 International CES in January.  If you’re not already reading my blogs you can always find them at Danto.info.