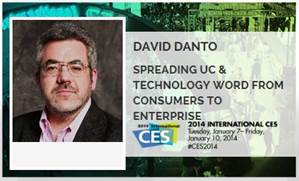 This year’s Halloween holiday has come and gone, and store aisles have shifted from candy and goblin themes to a brief pause on turkeys and then quickly on to the end of year holiday season.  For most people this means seeing family, buying gifts, attending parties and everything else stretching from revisiting religious tenets to enjoying the secular celebrations.  While it has that meaning for me as well, it also means something else.  For me it’s time to get ready for the annual trek to Vegas to see the latest and greatest in the world of technology.  I’ve got my airline tickets, reserved my hotel and car, and am doing the necessary research to gain all I can from the 2014 International CES (what used to be but no longer is called the Consumer Electronics Show.)

In the past some have asked me why does someone with a career in enterprise technology care about the latest and greatest in consumer technology.  I’ve been accused of going just for the fun of playing with the latest consumer gadgets.  I won’t deny I enjoy getting my hands on the “toys”, but if you think spending four days walking back and forth over two million square feet of exhibit space is my idea of “fun” then you’re missing the big picture.  There is no more “consumer” technology that isn’t enterprise technology.  Just ask the folks at RIM how well it went producing an enterprise friendly BlackBerry device while consumers flocked to their new iPhones.  Just ask Mitsubishi how well the sales of conference room projectors have gone since consumers started buying flat panel displays.   Understanding the latest trends in technology as a whole is essential, both to understand consumer needs and enterprise needs.

I share some good company in recognizing this.  CEA announced that one of this year’s Tech Titan Keynote addresses will be presented by Cisco’s John Chambers.  I do admit that Mr. 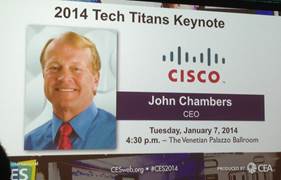 Chambers and I have not always agreed about technology (most notably when his firm created and hawked an overly expensive Immersive TelePresence product that was inferior in some ways to the market leading products at the time.  However, he has always been a visionary in technology, and showed he was again when after five years he simply purchased and adopted that superior technology of the market leading products.)  In his own words here, he explains how connectivity is not just a consumer proposition, but rather that “the internet of everything” will change the world in a way even greater than the internet has done to date.  He’s absolutely correct in this case.  One of the main themes of CES this year will be how the continued growth of sensors and the internet is a disruptive change.  Sensors everywhere connected to the cloud are creating autonomous systems that can park or drive a car, irrigate a farm, arrange for medical assistance and a whole lot more – all without the needed intervention of a person.

Another trend to be aware of is the imminent explosion of Ultra High Definition Television – sometimes referred to as UHD-TV or 4KTV.  The CEA defined UHD as “displays that have an aspect ratio of at least 16:9 and at least one digital input capable of carrying and presenting native video at a minimum resolution of 3,840 × 2,160 pixels.”  UHD will be a phenomenon in contrast to the total failure of 3D TV in the global marketplace.  3D failed for one significant reason.  Yes there was a lack of native 3D content – it was few and far between – but that is not the reason.  Current 3D required everyone to put glasses on to watch TV at home.  People don’t put glasses on to watch TV.  Other than the few home theaters that people built, TVs are watched while we are eating, chatting, playing, socializing, looking at tablets or other “second screens” and generally getting on with life.  3D required an enormous behavioral change that just did not happen and never would.  UHD however requires no behavioral change – it just looks better – significantly better – even with non-native UHD content (as long as you avoid the inexpensive units sold at warehouse outlets.)  Top manufacturers like Sony, LG, Samsung and others have produced displays that are stunning in comparison to their HD counterparts regardless of the content (as the upscaling technology is amazing.)  People will buy one unit for their highest profile installation, then come back to the store to buy more as their older displays look so poor in contrast.

I could tell you what other technologies I expect to see at the 2014 International CES, but the biggest reason for me to attend is for the things that I don’t know about.  Maybe it will be the next VCR or DVD player or flat panel display or camcorder or IPTV system – all of which didn’t exist till they were introduced at past shows.  Maybe it will be because of the new people I meet that become friends or clients.  Maybe it will be to meet you.  If you’re going and want to sync-up there just send me note.  I’ll see you in Vegas in January.