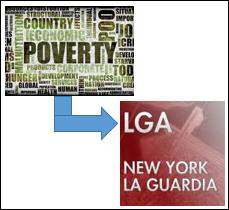 One rule I always follow – especially in my public blogs and social posts – is that I just about never share opinions on politics (or religion for that matter.)  While it is my intention to continue to refrain from opinions on personal beliefs, I have to pause for a moment and let everyone know about a politician I agree with.  The US Vice-President, Joseph Biden, is a very smart man who is known as an individual who sometimes says “colorful” things that are not always well-thought-out.  Many have made fun of him because of this.  A few days ago he let loose another verbal bomb about airports.  This time though, no matter how insulting the statement may have been to a few, he was dead-on correct.  Our Veep said that if he blindfolded someone and took him to La Guardia airport, that person would think he was in “some third world country.”  He went on to praise Hong Kong’s airport as the kind of modern facilities travelers would expect to see in the States.

To that I say bravo Mr. Biden!  As someone who has flown extensively in the US and abroad I can attest to the fact that the Vice President only said what all frequent flyers feel.  Ask anyone who disagrees with the characterization to use a bathroom near the United gates at LGA and then see how they feel.  Why is it that Hong Kong can have an airport that rivals the shopping and dining experiences of the best malls and restaurants in America, but our major city airports and airport services are filthy, crumbling messes?

If you think that the Veep is wrong it must mean you haven’t flown to a major city in America lately.  Most of the airports here have a tale of two cities – where a part of the facility has been improved but other parts remain in shockingly pitiful shape.

·        Newark / EWR (my home airport) has a modern C3 terminal with respectable shopping and restaurants but a terminal A that continually looks like it was hit by a bomb.  There are holes in the seat upholstery there that are big-enough to swallow a newborn baby.  If you need ground transportation however the fortunes are reversed.  Terminal A is technically in the city of Elizabeth and is served by their taxis.  Terminal C though is considered to be in Newark. Catching a taxi there is right out of the third world.  The taxi line is run by a stand-up dispatcher that must have failed the entry exam at McDonalds to get the job.  The yellow cabs don’t take credit cards unless you first wait in a separate line and prepay with a premium added, but that is of course if the perpetually broken machines are actually working.   If by some miracle you do finally make it into one of the cabs you’ll find it to be a car that would never pass a motor vehicle inspection – held together with tape and twine, disgustingly filthy and with all “check engine” lights constantly on.  On my last taxi trip home from EWR Terminal C the car actually had to be towed back to the shop after breaking-down right in front of my home (which I realize was actually very lucky for me.) 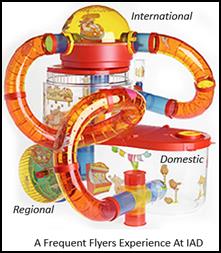 ·        Flying into our nation’s capital at Dulles / IAD reveals a beautiful international terminal in the middle of a maze that would make a Gerbil habitat proud.  There are tunnels, escalators, and a bus-based rolling gate system they call a “mobile lounge” that’s definitely right out of the third world.

·        Houston / IAH has a few modern areas but woe be you if you have to take a regional “express” flight out of “gate 84”.  This gate is just a huge hallway with a maze of doors that open right onto the tarmac, with the whole thing run by more McDonalds rejects.  The experience makes Jed Clampett Air look luxurious.

·        The list of embarrassments could go on for this whole blog:  JFKs international arrivals in New York resembling the worst bus station you’ve ever seen; SFO gates in wings that are so far apart tight connections often can’t be made; ORDs arcane system of changing from an international arrival to a domestic departure, and more and more….

The reasons for the US major cities’ third world airports are many, but essentially all relate to investments not being made in our nation’s infrastructure.  The airlines blame the local municipalities while their overpaid executives quietly rejoice that they have a built-in scapegoat to take the blame.

I’m not really sure what part of this issue is worse.  Is it the fact that the already beaten-down American business traveler has to suffer these indignities every time they fly, or the fact that international travelers visiting the US for the first time have this as their first impression of America?

So in this case, instead of poking fun at our Veep for saying something silly we should all be rejoicing that someone in a position of authority had the courage to admit the truth.  As they say, acknowledging the problem is the first step toward recovery.