Many of the note and photos I’ll add to this page will already have been sent as tweets and will represent my raw thoughts.  To get this information in real time be sure to follow my Twitter feed by clicking here: @NJDavidD .

I spent today at the Sands Expo area – covering Wearables, tech start-ups, 3D printing, Smart Homes and much more.  I had some specific appointments I had to get to at booths I had to find, but the CES iOS app was completely useless in helping me find them.  This has to be the worst implementation of a trade-show app I’ve ever seen.  The one thing we need them for – maps to exhibitor locations – never loads or crashes; and if you are lucky enough to get it to load, here’s a screen-capture what it looks like:

No booth numbers, no names, just a poor version of Tetris.  It’s time to bring back paper maps if this can’t be done properly with offline maps that work.

When I did finally find my way around here are some of the highlights I saw:

·       The KlickRnext is an infrared (learning) transmitter that can connect to your smart device via Bluetooth and lets you control just about anything that uses a standard remote from your phone/tablet. 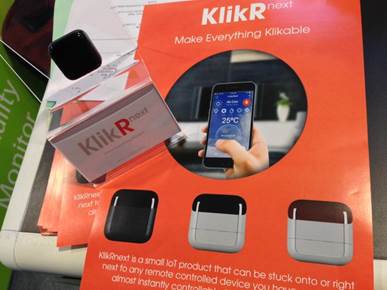 ·       United Sciences showed their system of scanning the contours of an ear and then 3D printing custom fit headphones.  Here’s a great example of technologies blending (advanced sensors, 3D printing) to disrupt a process (making a wax mold of an ear) that’s been around for years.  I’ll show video of the process on AVNation-TV next week. 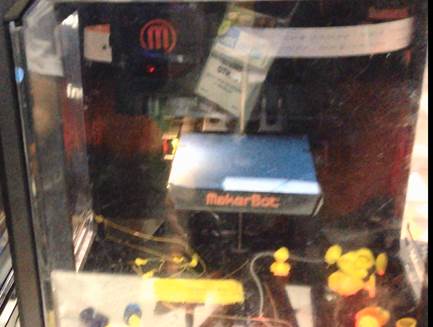 ·       A company called Kino Mo showed holographic 3D images seemingly floating in mid-air (using a spinning disk.)  It was one of the most crowded demonstrations on the floor.  Click on the picture to see a twitter video of it: 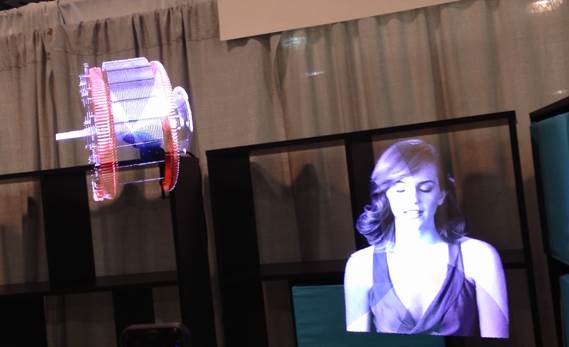 Tomorrow will be my final day at the expo.  I’ll put all my notes together and edit the videos over the weekend, then update this page with the links.

The expo floor officially opened today and with it the 2016 CES was underway.  However, even before the opening this morning I met with the team from a great, inexpensive new desktop videoconferencing product called ChatLight. 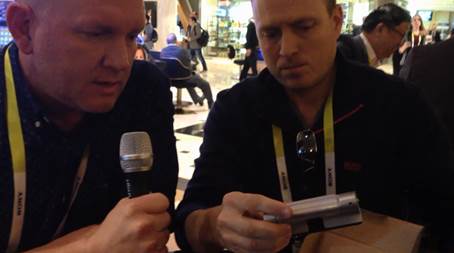 For US $30 you can have a precisely color balanced LED light that attaches to your device or PC and vastly improves the images to the far end.  Click the photos above and look at the difference yourself.

When I finally got to the show floor I observed that most of the muscle car audio systems of past CESs have been replaced by the actual automobile manufacturers themselves. 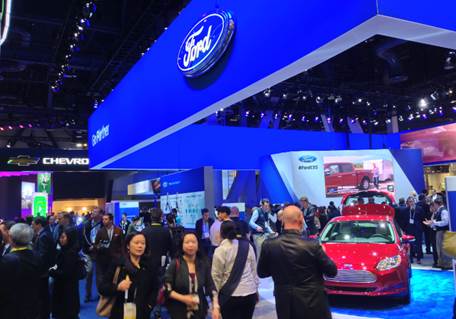 There is so much volatility in the automotive space - with the overpowering buzz about autonomous and connected vehicles - that I’m happy I don’t cover it.  The exhibits – even Volkswagen’s – were very popular.

As far as display manufacturers are concerned, LG went over the top, creating a virtual planetarium with displays suspended from the walls and ceiling of their entryway.  I was also floored to see their new ultra-thin OLEDs in person.  Click the picture of the flower to see a twitter video of me walking by it where it becomes almost invisible sideways. 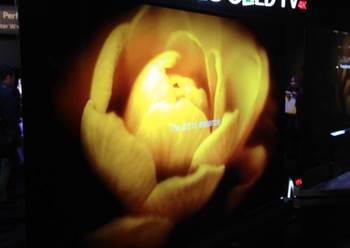 This year’s themes / trends are turning out to be:

1.    The Internet of things is exploding – everything is IoT or has an IoT angle

2.    Self-driving cars are being discussed as inevitable – and discussed often – and they’ll be electric – and apparently have CarPlay and Android Audio compatibility…

3.    Practically every other exhibitor is showing a stylish doodad that is tied to health and fitness.

4.    Vinyl records are back, with products from Sony, Audio-Technica and Panasonic to name a few.

5.    There are more drones and in all shapes and sizes – Parrot’s Disco drone is shaped like a mini jet plane.  At a press conference here FAA Administrator Michael Huerta announced that as of this morning, 181,061 people haven registered as drone owners.

6.    Last year over the head headphones were all the rage.  This year, earbuds are making a comeback with dozens of firms showing-off their wired and wireless versions.  Tomorrow I’m scheduled to get my ear scanned and have a custom 3D printed set made for me on the spot.

It was also great spending some time and catching-up with the team from Logitech for Business today (the guys that make the very popular Conference Cam products.)  They’ve got some great announcements coming-up in the next quarter or two, showing they really understand the desktop and huddle room collaboration space and are preparing client agnostic products to meet the needs.

I’ve recorded video clips of about a couple of dozen exhibitors describing their new device / system for my AVNation-TV webcast Connected! Everything IoT.  I’ll be editing them together over the weekend and should have that episode ready for viewing next week.

More tomorrow.  Keep in mind that you should be following me on Twitter (@NJDavidD ) to get these news updates and more in real time.

Tuesday is press conference day at CES.  Mind you it is impossible for one person to attend all the press conferences as you have to line-up to get in to one as a prior one is starting.  I attended a few today.  I heard some interesting announcements.

·       Every video firm announced they will be selling an Ultra HD BlueRay player later this year.  It was like table stakes here in Vegas.

·       Panasonic debuted its Ora connected smart-home system.  They also resurrected the Technics name for a brand new vinyl LP turntable due to what they claim is a resurgence of that audio format.

·       Samsung showed curved, bezel-free OLED TVs – up to 88”, and they showed smart menus that aggregated all content from all sources (cable box, game console, over the air, etc.) into a single menu that automatically provides control compatibility. 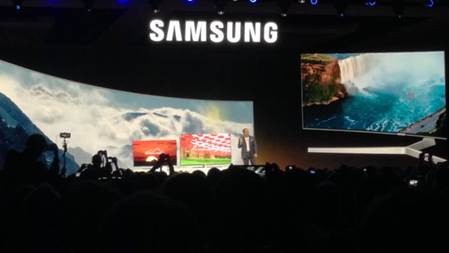 It’s also becoming clear even before the exhibit floor opens that cylinders are hot this year.  Blame Amazon Echo and our world of unoriginal thinkers, but if a manufacturer could build their product in the shape of a Thermos then they did.

The day ended with my annual visit to Pepcom’s Digital Experience – a media and analyst only event where one gets to chat with manufacturers in a less crowded, less formal environment.  I recorded a bunch of videos for my AVNation-TV show Connected – which I’ll hopefully have edited over the weekend and ready to show next week.  For now though – as just a taste of things to come - here is one product I saw this evening that I’ve been following for a while – The TouchJet Wave – a $199 device that makes any flat display an interactive whiteboard.  Click the picture to see the video.  Let the demo speak for itself.  If this functionality is available in a reliable device for under $200 then we’re experiencing the digital disruption of a whole range of products – some on the market, some not, some that are apparently still somewhere in between. 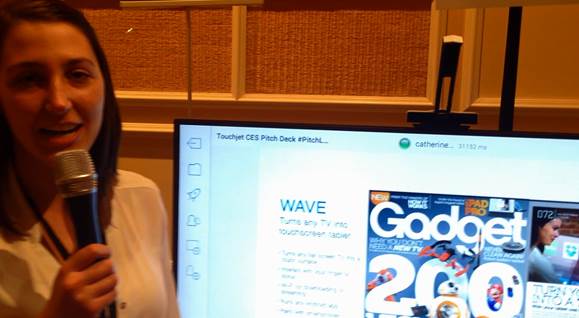 The expo floor opens tomorrow and I have lots of exciting appointments….

This is the first day of CES related gatherings in Las Vegas.  My day started with a private tour of all the new things Plantronics is working on, including the release of their new Bluetooth dongle for UC. 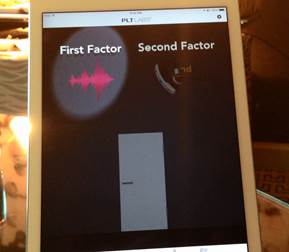 This unit now has a physical pair button, can pair to two devices simultaneously, lights-up to indicate use, mute state, etc., and is backwards compatible to their entire Voyager series of headsets.  Just the ability to visually see that you’re muted by itself is an industry breakthrough.  It comes as standard with their Back Beat pro plus and Voyager Focus units.  I also saw some of the latest in PLT Labs work, with their latest Concept 2 headset supporting FIDO standards for two factor authentication – allowing voice commands to lock and unlock doors, make payments, etc.

Next it was The CTA’s turn to present their look ahead at industry trends.  Shawn DuBravac, the CTA’s Chief Economist walked the attendees through the numbers of this year’s CES (the largest ever) and what he saw as his trends to watch. 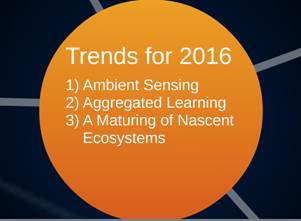 Shawn’s key point this year was that the conversation about technology at CES used to be around what’s technically possible, but in the last year or two we have hit a turning point where the conversation has turned to what is technologically meaningful.  This separating the wheat from the chaff is turning out to be a recurring theme in and off itself at CES this year.  His full presentation is available here: https://prezi.com/yylpzufa0d8v/2016-ces-trends-to-watch/.  After he and Steve Koenig gave their insights on technology and the economy CES Unveiled Las Vegas began.  Here’s where a number of firms showed their new products to a press and analyst only audience.  There was the ili wearable language translator, Sphero’s BB8 robot, and a whole lot more I’ll cover over the next few days. 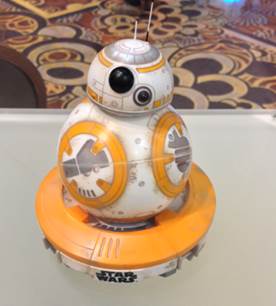 Much more to come as the big press conferences are tomorrow…

Today I set-up this microsite.  All my raw notes, photos and thoughts during the expo will be aggregated here.  As the date gets closer there are already themes emerging that I’ll want to keep an eye on.

·       Home-Hubs Hot – The Amazon Echo looks like it will be the start of a trend as many firms jump to copy the concept (and in many cases even the form factor.)  This apparently includes entries from LG and MyXy, as well as word that Samsung wants their TVs to be your smart home hub. 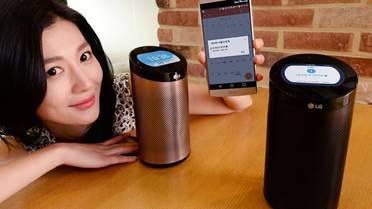 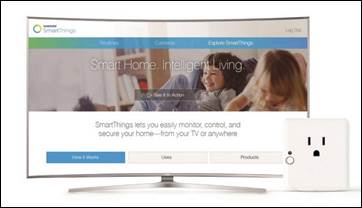 ·       Lego For Technology – Much more than in years past I’m being contacted by firms and developers exhibiting incomplete products.  In some cases these are software modules, in other cases they are microprocessors and sensors.  It apparently no longer takes a working, completed product to come to CES and show-off.

·       IoT is HoT – over 70% of the marketing and promotional announcements I have received mention that they have something to do with the Internet of Things.  Look for this term to burn-out as rapidly as “wearables” has.

·       Collaboration Divorce – Just before CES and the start of the New Year Logitech (which has been coming out with very innovative collaboration products in recent years) divested themselves of Lifesize – for a fraction of what it paid just a few years ago.  I look forward to meeting with these firms at CES to see what their future plans are.

Much more to come as we get closer….