Mobility, Video and the Zees

Late last year I authored and edited an article on the topic of mobile video technology.  I made the point that none of us plan to go around holding our smartphone at arm’s length while riding the bus.  The exact quote was “we all pictured how ridiculous it would be with everyone on a public bus holding a phone at arm’s length and having conversations with people that are not present.”   Well, after watching this Verizon commercial on TV last night I’m not so sure anymore.

The commercial shows a big sister on what must essentially be an all-day video call with her little brother, giving him hints and tips on his first day of high school.  It’s easy to debunk the concept of the commercial based on the implausibles – no high school student has the money to afford that much cellular bandwidth, no one would put up with the open speaker he’s walking around with (as he’s not wearing a headset) and heck – you can even just stop at the whole premise – no high school age big-sister was EVER that helpful to a younger brother (trust me, I know from personal experience.)

But if you can look beyond all of that as “poetic license” and pick-up the message they’re illustrating, it may prove my original premise about video and busses wrong.  The next-next generation that will eventually head into the workforce may be OK with having video conversations in public.  (I’m not sure what to call them.  What comes after Generation X and Generation Y – Generation Z?)  This next generation has never lived in a world without videoconferencing.  Where the TV set was my de-facto babysitter these Z kids were entertained by the iPad.  Where my children had to be taught how to use a mouse as toddlers, these Zees will never know a screen that can’t be controlled by touch and gestures.  I suppose it is a logical assumption that they will be OK with video chats in public (but the arbiter of that logic will have to be their Spock, not my Spock.)  There are many precedents for odd or exclusive technology experiences working their way into cultural norms. 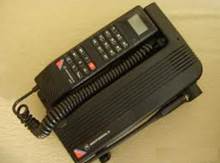 For example, I remember the first time I used a cellular phone in public.  I was traveling by train from New York to Rhode Island in the late 80’s to inventory some equipment for my firm.  I hate to travel dressed-up so I was in jeans and a flannel shirt.  I did all the work that I had to and had a couple of hours to kill before taking the train back.  I went into the restaurant next to the train station – a financial industry / businessman’s hangout - and asked for a table.  I was the only person in the restaurant that wasn’t wearing a yellow tie and people looked at me as if I was a leper.  Then, after everybody finally stopped staring, my briefcase started to ring.  I unpacked a transportable cellular phone – the one that I carried to help coordinate broadcast operations – and answered the call from one of my engineers.  I suddenly went from leper to eccentric status in the eyes of the suits there.  They all understood that only “very special people” carried portable phones.  Cut to just sixteen years later, during the tragic hurricane Katrina disaster.  I can remember seeing stranded people on TV news shows - people who said they didn’t have enough money to catch a bus out of town to evacuate - calling for help from their cellular phones.  In just sixteen years the absolute latest technology moved from ultra-exclusive to being so common that it would be weird if people in all socio-economic situations didn’t have it – as common as a pair of jeans. 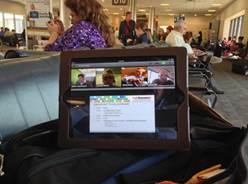 There’s no reason to think that using video while we’re on the run can’t make that same cultural leap.  It is rare today to see people using video in public.  I participate in meetings from wherever I am (like at the airport as shown to the left), and some of my clients have made the leap to video anywhere, but it is still rare.  Video service firms are clearly starting to position mobile videoconferencing and video chat as common and normal – hoping culture then adopts it as the norm.  So Verizon’s fictitious helpful big sister is really just meant to get these Zees used to the idea that video anywhere is OK.  They’re not the only ones with that message.  Another video services firm – Blue Jeans Network – has also just produced a spot intended to do the same thing for businesses.  The Roominator is a hilarious promotional production on You Tube that shows how mobile video is an essential part of today’s work-life balance.  You can expect to see even more of the firms in the video space encouraging you to take your calls using video from wherever you are.  The technology is only getting better.  If you’re not one of the Zees I suggest you force yourself to give it a try and see the value of any video – and any content - anywhere.  If you’re old enough you can then be like me – someone who has actually played a record and dialed a phone but still can embrace the change technology brings and use it to transform businesses and organizations.