There have been stories in the news this week about how Microsoft Windows 8 is being recognized as a dud.  First, Microsoft let it sneak out that that as of April they’re really going to start focusing on Windows 9.  Then, over this past weekend, HP began a campaign to bring back Windows 7 “By Popular Demand.”  All of this was (of course) predicted by me in my humorous 2013 predictions over a year ago.  I made the point in that blog – which many have made before and since – that Microsoft operating systems are like Star Trek movies - only every other one is any good.

In light of that, The Voyage Home seemed to be an appropriate topic to share this week as the final punctuation to my 2014 CES report of a couple of weeks ago.  CES is what I was doing when most of the rest of the US was dealing with the Polar Vortex issues.  Firstly, I was incredibly lucky on my way to CES in getting out of EWR Saturday night January 4th without any significant delays.  Most of the rest of the flights from east to west had major issues all that week.  I was also very worried about getting home that Thursday afternoon near the end of the conference for a number of reasons:

o   The worst security delays ever experienced at Las Vegas McCarran airport were during the CES getaway in the early 2000s.  Passenger lines that wrapped around the upstairs aisles and 4+ hour waits were very common.

As it turned out though, most of my return trip home was OK.

Step one was returning the rental car.  I gained lots of respect and have major kudos for National Car rental.  They were bringing in huge amounts of cars very rapidly and with smiles.  It was the best I’ve ever seen during heavy returns.  I normally use other firms for car rentals but my employer recently switched to National.  If this is typical of how they operate I’m glad they did.  I was very surprised and pleased.

Step two was checking a bag.  Mind you, I absolutely don’t check bags when traveling on business.  I can give you hundreds of reasons why it is never a good idea.  Just about the only time I’m forced to do so is when returning from CES.  I pick-up lots of technology demo items and product literature and I can’t manage squeezing them all into my carry-ons.  Amazingly there were NO LINES at United’s T3 counters for bag check.  Not a single person was waiting, not even for coach.  It was a very pleasant surprise here as well.

Step three was security – and you just knew I’d never be able to hold the winning streak leaving Las Vegas.  The TSA was the streak-breaker here, as their agents seem to be the epitome of the quote “if all you have is a hammer, everything looks like a nail.”   The agents wanted to inspect my carry-on because of all the technology in it.  Here we go again - with TSA agents going rogue on the rules of Pre-Check.  I’m the same pre-cleared, Global Entry, fully investigated guy that flies all the time.  Why they think they need to check my bag this time as opposed to any of the others is incomprehensible.  This was a full check – as in take out your PC, unpack the sundries, etc. - not a random sniffer test that I’ve had many times before.  As I travel using Pre-Check (which is a stunningly great idea by the way) I find the TSA agents are frequently just making up rules as they go.  In just the last six weeks I’ve seen agents say “they’ll staff the Pre-Check lane when they feel like it” (Phoenix); say that Pre-Check means “you can leave on your belt and shoes but that’s the only difference” (also Phoenix); and say that if you have any electronics “more than one PC they all have to come out” (Newark.)  On this particular trip the rules they made up that day took me an extra 25 minutes.  It was a good thing I arrived at the airport early.

Step four was boarding.  As a United Premier Platinum (who carries a luggage tag saying “Ex-Over-Entitled 1K” by the way) I was 50th (and eventually 55th) on the upgrade list for the 12 seats in first.  That’s some benefit. 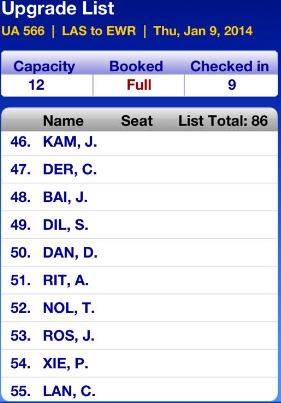 To say there were a number of frequent travelers on the flight would clearly be an understatement.  Of course, the STUPID gate agents treated us all like cattle, trying to stop a woman from bringing a third bag on board that contained a service dog, and hassling me - despite being in group 1 - because they didn’t like the size of my carry on (that has traversed the globe hundreds of times.)  Has anyone else noticed the new, tiny luggage sizers United now uses?  I’ve been hassled by agents more in the last six weeks than in the last three years.  If you’re wondering why United made them smaller (much smaller actually than the actual room in the overhead by the way) I can give you six-billion reasons why.  The fees United and the other airlines are charging passengers for services like checking bags are a cash cow for them.  Of course they want people to think they have to check their bag because it doesn’t fit.  Of course these sizers are pre-security in many airports.  What I really want to do is make a wager with the next agent that tries to stop me – If I can’t get my bag into the overhead bin in a standard wheels-first position I’ll give them a thousand dollars, but if I can fit it easily they have to give me a thousand dollars.  How many agents would really hassle frequent travelers if they knew they would be personally responsible when they are wrong?  As for this trip, I talked my way past the agent and on to the plane.  Of course my bag fit wheels-first as it should and always does.

The topper of this voyage home was the seats.  I had been really looking forward to a flight home on a legacy United A-320 bird and not a legacy Continental long and narrow 737-kazillion.  It was the scheduled A-320, but with the seats replaced with the all-new super thin ones - my first experience with this latest “making the pizza too cheap” experiment.

Honestly, I was surprised to find after all I heard about them that the seats were not nearly as uncomfortable as they’ve been made out to be.  But the seatback storage however is totally un-functional.  As you can see in the collage above I could barely squeeze a water bottle into the mesh section below, and the section above that sits behind the tray table is completely useless.  Where do I put my iPad?  Where do I put my headphones or anything else I need handy?  As small a thing as it might seem to be, it made the flight tremendously uncomfortable for many of us seasoned travelers, with homeless bottles and work devices now placed on the floor, being kicked around all the time and rolling throughout the cabin.

It dawned on me that an aftermarket pouch could be designed that hooks onto either the mesh or the upper section with two hooks and could serve the functions of the traditional seatback pocket.  Once I got home I looked for one on Amazon without success so I made one out of a thin CES swag bag and a few 99 cent clips: 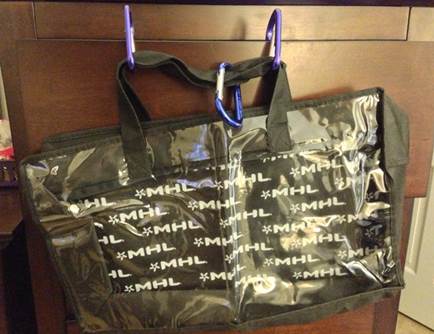 I haven’t had the chance to use this yet but it is now a permanent addition to my flight briefcase.  For this voyage home though all I could do was use a standard plastic grocery bag by looping the handles up under the bar and hooking them on the tray table clip.  It helped but it was hard to differentiate storage from garbage.  I can’t wait to try the new invention.

After boarding this flight we were stuck on the ground for about an hour before taking-off.  The pilot explained that United recently changed their computer platform (again?) and all the flights were having hard times getting them to work.  They got through the issues but needed to re-open the doors so that maintenance could come back on and certify the fix.  So, after waiting out the clear mechanical delay, how did the liars at United list the status? 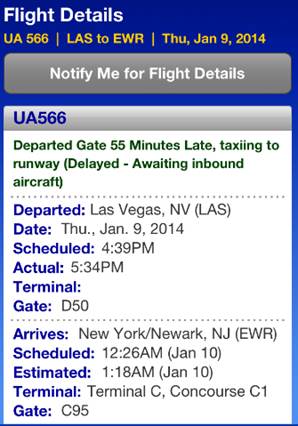 Of course, we were sitting on a plane with a malfunctioning computer for about an hour – what else would it be logged and filed as but a late incoming?

When we got to EWR it was “CO dba UA” business as usual.  The checked bags took an hour to come out onto the carousel, and the “priority” tags were nowhere to be seen for the first fifteen minutes.

All in all this was just another trip in the life of a Newark hub captive.  I didn’t actually get home from my scheduled 12:26 landing until after 2:30am (and I live ten minutes from the airport.)

Once this Voyage Home was over I found myself at the Final Frontier with the new United.  I reached Million Miler status on these flights – which now actually only means Premier Gold for life.  I don’t have any intention of continuing to give the current management team at United any “loyalty based business” considering the treatment 1Ks and Platinums receive.  So while I’ll fly United when I have to, I’m off to the Undiscovered Country of which ever airline has the lowest cost and best schedule / routing on each individual trip I take.  Future Generations may once again be loyal to United if their employees or Board of Directors stage an Insurrection and remove the clueless and arrogant management.  For now however, the Nemesis of the Newark hub captive is still how everything is all Jeffed-up. (With my apologies for all the Star Trek movie references.)