Get The Duct-Tape, The Airplane Is Falling Apart

I was going to title this blog United Airlines is Falling Apart, but then I figured it might be perceived as unfair piling-on. 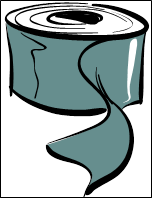 Everyone already knows that the current United management is as doomed as it is clueless.  Not only are the former United and Continental employees at each other’s throats, each blaming the other group for the miserable conditions, and not only are formerly loyal passengers abandoning them so fast that they continue to lose ground while all competition does well, but now United management has finally sunk to the status of  a transparent failure to the usually fawning analysts.  One actually finally looked past the usual bean counting and called-out the naked emperor by stating “They are not winning … marketshare back because they are not valuing the flying public's experience….”  So even though this blog is in fact about (yet another) miserable flying experience on United this year - from a Newark “hub-captive” - I’m not sure if it’s fair to blame United – this time.  The flight in question earlier this week was United 3466 – which as their website and the seatback safety card clearly stated (in teeny-tiny print) is “Operated by Shuttle America Airlines dba United Express.”  Shuttle America?  I bought the ticket on the United website.  The plane had the United name and the “death-star” livery on the back.  The crew wore the United uniforms.  The FAs said “we know you have a choice in flying [yeah right] and we appreciate you choosing United.”  So to the average traveler and the seasoned one – it seemed pretty obvious that it’s part of United Airlines.  But it’s not.

I and many others have written before about how the regional jet and regional airlines that operate them are ruining air travel – both by deceiving the general public and sucking-up all of the take-off time-slots at airports.  However, if my experience earlier this week was indicative of the brainpower at these firms I’m even more worried than I was before.

The problem this week was garbage and duct-tape.  Really.  Just when it seemed that there were no more excuses the airlines could throw at me that I hadn’t heard before I get to experience two new ones.

We had just completed boarding this flight – a couple of minutes early no less - and we were about to take-off, when the captain explains that the flight attendant’s garbage can was broken and the maintenance technician couldn’t fix it.  We would need a replacement – which happened to be located on the “other side of the airport.”  (He really said that - you can’t make this stuff up.)  The passenger in front of me said he was carrying some trash bags and was happy to loan them to

the FA.  She politely said no – if she didn’t report the problem she could get “personally fined” by the FAA (another direct quote.)

So, while waiting for a replacement garbage can I checked the United iPhone app to see if the crack-staff in operations had updated our status.  You bet they did - they listed us as having departed forty-four minutes early!  Wow, the first time-traveling garbage can in history!

After about a 20 minute delay a new can was brought on board and the FAs got ready to close up the door – ‘till they noticed that the front overhead bin latch wouldn’t close.  The first FA tried all the typical bin-Olympic moves – the overhead slam, the push, the under-bin-lift, the fiddle with the latch – it wouldn’t close.  She called over the next FA who showed her style on all the same Olympic moves with no luck.  Then the captain came out.  Yup, you guessed it – the same bin-Olympic routine.  It took the three of them to determine the bin was broken.  It was only used for some emergency kit and paperwork – which was easily relocated to another empty bin – so you’d figure we’d get going then, right?  Nope.  The danger of an empty bin door swinging open and injuring a fly or something was just too great.  How about closing it then – putting a piece of tape across it.  Nope again, they were under regulations and obligations to call it in.

So here’s todays riddle – how many airline people does it take to tape a bin shut?  Apparently five. 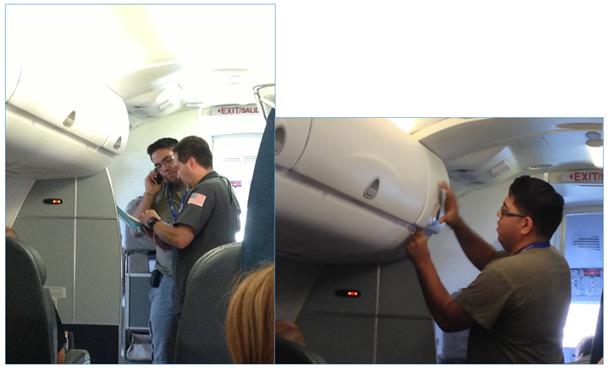 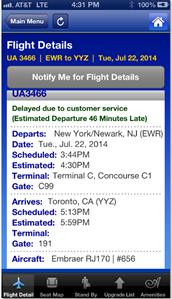 First two flight attendants and a pilot have to individually run the Olympics as above, then two maintenance engineers have to board the plane, read the manual and call for advice.  Forty more minutes later – yup, you guessed it again – they finally put tape over the door that wouldn’t latch.  By then the crack United operations staff had fixed the app.  It was showing us as delayed 45 minutes, but blamed the problem on “Customer Service.”  I’m sure they actually filed the delay like that with the DOT.  Never a maintenance issue, it must have been an unruly customer that caused the delay.  (United’s clueless management won’t be happy until they’ve rid themselves of all those horrible customers….)  I wonder how many delays are reported honestly as poor maintenance from an overwhelmingly outsourced staff and how many are blamed on customers.  I’m absolutely sure nobody checks to see if they’re lying unless a passenger complains on their website, an even then I doubt anyone calls the airlines on their lies.

The most troubling thing to me though was how unbelievable it is that both the garbage can and the door latch chose that exact moment to fail.  Sometime after the arriving flight’s crew left the aircraft and before the departing crew came on board – when not a soul was looking – they must have both conspired to spontaneously fly-apart together - distraught over the horrible life of non-critical components on a second class regional airline.  Um, no.  The arriving crew should have reported the problems so that they could have been fixed before we all boarded and had to be delayed.

Passengers hate delays, and lord knows United passengers have more of them than anyone else.  But while repairing an engine may be indicative of poor maintenance overall, it’s not like we’re going to object to having it fixed before we leave – we know you can’t pull-over in the air to look at it.  But a small, empty bin?  A garbage can?  That should not have destroyed a few dozen passenger’s evening plans.  And give me a break on taking over a half hour to decide to put tape on it.  I guess with everything else they lack, regional crews / maintenance also lack common sense.

So maybe I should have called this blog Shuttle America is falling apart.  Next time I fly them I’ll be sure to bring some duct-tape in my carry-on to fix any suicidal garbage cans and overhead bins.