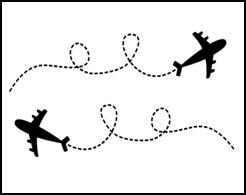 There are bad ideas, and then there are bad ideas. Pre-COVID I likely never would have tried as wacky an itinerary as I tried this week, but it’s been so long since I’ve traveled extensively that I likely forgot how bad an idea this would be.  On Wednesday I needed to speak in-person at a one-hour event panel in Atlanta at 9:10am EDT, and then I needed to speak over video to another panel (taking place in Canada’s British Columbia) at 4:15pm EDT. With COVID I didn’t want to fly to Atlanta and have to have dinner and stay there the night before.  So, to minimize my exposure, I planned to take a 6am flight EWR-ATL, and then a 12:30pm flight back.  Add to that, the outbound was on Delta and the return was on United (because UAL didn’t have an early enough flight to get there on time.)    I was counting on two different airlines actually flying as promised and close to their published schedules – crazy, right?

The drama started of all places on my iPhone the day before travel.  I checked-in for the outbound Delta flight just fine.  They wanted a whopping $69 to upgrade from general seating to Comfort Plus – and I spent the cash because I wanted to give it a fair comparison to United’s Economy Plus.  Then, around mid-day, I tried to check in for the United flight for the return home.  The United app kept telling me that “my first segment is on Delta, I need to check in with them.”  The automated systems at United couldn’t tell this was a one day round trip.  They thought it was a connecting flight.  When I called the Premier desk at United, the agent tried ‘a trick that sometimes works’ to help, but it was useless, and eventually told me I had to call my company’s travel agent who booked it.  When I called that team they initially said there was “nothing they could do” and that I’d have to “get checked in at the airport.”  I did my best to explain to a supposedly experienced travel agent how impossible it was at EWR to go to terminal B for Delta and be able to ‘stop by a United counter,’ and even if I could do that, it’s a messy way to handle a short turn-around trip.  He then put me on hold and “called his friend at United” after which he was able to check me in.  And all of that was only the day before travel.

It’s been a couple of decades since I was on board a Delta aircraft, so while much of my experience may not be news to you, it was to me.  Here are my observations as a United Million Miler flying Delta.

·    When boarding the aircraft, the Delta agents use portable ticket scanners – which seems to be a lot better idea than having to have every passenger pass a fixed ticket scanner.

·    Boarding takes place like it used to for me years ago.  Groups get called-up and board – no one waits in lines.  (This could also be due to the both early and half-empty flight – not sure – but there were no ‘line up here’ cattle signs.)

·    The Comfort Plus seats were certainly comparable to the UA Economy plus seats – perhaps a bit wider.  These (on a 739) had normal, useful seat-back-pockets and not the United mesh garbage, but there are some non-mesh on UA as well, so I don’t know if this is one aircraft or fleet wide.  I did miss the mid-cabin lavatory in the UA 739 as it is a pain to have to choose between begging my way up to use the one in first or walking to the absolute rear of the aircraft.

·    I did notice the now redundant and useless ‘No-Smoking’ lights were replaced with ‘WiFi Available’ lights – but I don’t think they are tied to actual availability as they were always on.

·    I believe I could have asked for free alcoholic beverages as part of these seats, but it was 6am for gosh sakes, so some caffeine and sugar in a Coke was my choice.  I liked the fact that they use 8oz cans for their seat-side service, as I usually wind-up wasting over half a can of soda on United flights.

·    Delta uses Gogo for inflight WiFi, and my Gogo log-in crossed airlines and worked fine. I did notice that apparently the WiFi on Delta allows free messaging – which is a nice perk.

·    Upon landing at ATL – the busiest airport in the US, and Delta’s home airport – they couldn’t line-up the jetway with the plane.  We had an unexpected 15 minute delay, forcing me to change my shirt in the taxi on the way to the presentation I had to give.  I arrived at 8:50am for a 9:10am presentation.

I was done at 10:15am, and called for a Lyft to the airport.  I made it through security with no issues and headed to my gate.  It is interesting to observe that, somehow, my tight itineraries always seem to put me just about as far away as possible.  I landed that morning at E33 (nearly the longest walk to the train, one stop away from the longest train ride) and my return departure gate was T17 (no train ride needed but the longest possible walk.)  I’ve flown so often in my life I don’t recall many airports by name, but my sense memory by sight is very good.  As soon as I saw the holding pen at the ass-end of this terminal I remember the many times sitting there waiting on delayed United flights – and sadly, today was to be no exception.  It was nearly impossible to find a seat with any social distancing, and then, just as we were getting on line to board, we were told we had a 40 minute delay until “weather conditions improve,” squarely blaming Air Traffic Control for the delay.  As you can see below the weather at EWR was just fine.  The real reason the flight was delayed (as the pilot eventually told us) was the ongoing runway construction at EWR – a situation that should NEVER represent a last-minute surprise requiring a schedule change.  United really just doesn’t care that they publish an unachievable flight schedule as they publicly lie and blame others for their inability to manage their own scheduled traffic.

It wasn’t United’s fault that my activities that day was very tight, but an avoidable or predictable delay shouldn’t be blamed on others.  We really shouldn’t have to hear that their dog ate their homework every time we fly.  Unfortunately there is no penalty for the constant lies. 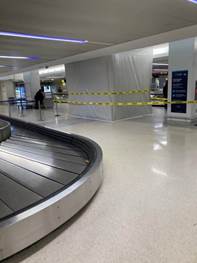 and be on my 4:15 video presentation call.  Coincidentally, as I was walking out of the airport, I noticed that all seating in the terminal C baggage area (both the chairs and the carpeted skirts around the columns) are now gone – covered with construction plastic and caution tape.  I pray this is a temporary change, but knowing United as I do we can probably forget about any chance of sitting down as we suffer the interminable wait for checked bags to be returned in the future.   Sigh……

Soooooo…. It was a blatantly stupid idea to plan my travel day the way I did.  Any butterfly flapping its wings could have killed my plans.  Though it came close a couple of times, the plan actually worked.  I don’t, however, recommend it for future travel.  I rolled the dice and came out barely ahead.  Your mileage may vary…….