Notes From A Road-Trip… 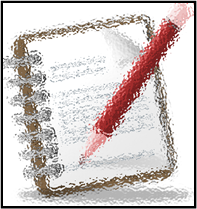 I just flew back from a business trip to an industry conference (and I have to use all my strength to not follow that with “and boy are my arms tired.”)  I experienced many new and different things, and some old and annoying things.  This week’s blog for JoeSentMe readers is a collection of my random observations from this trip.

·    Flying immediately after the mask mandate had ended was odd.  About 30% of travelers were still wearing masks, and some like me are double masking on planes.  Strangely, I saw a number of people wearing masks over their chins or around their necks at the airports.  I can’t understand why people would choose to still wear a mask but in a totally useless way when there is no longer a requirement.  It just reinforces my thoughts on people’s intelligence. 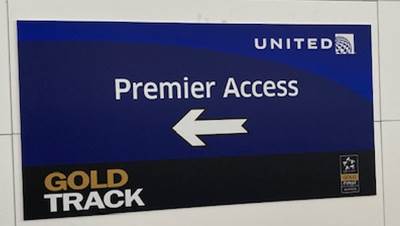 The Security lines at EWR now have a new twist.  In-addition to regular security, TSA Pre-Check and Clear, there is now a separate “Premier Access” lane.  One sees it (almost completely empty) when standing on the Pre-Check line – and a half dozen people that I saw asked an agent there “Do they honor the Pre-Check guidelines.” (The answer seemed to be no, it’s a regular security entrance but a shorter line.)

·    On this trip I had my first flights on 737-Max aircraft.  The Max8 had a new seatback IFE system.  The Max9 had no IFE, but it had the mid-cabin lavatory.  I do not like either aircraft.  I never thought I could miss the Continental era 737-900er but they managed to make me 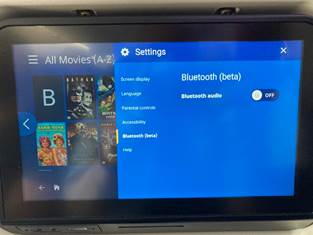 ·    The IFE system on the Max8 had a “Bluetooth audio” option listed as “beta” in the settings.  I tried it with my Bluetooth headsets.  It didn’t work.  Adding the “beta” tag was likely easier than getting it to work correctly.

·    I had to call the United customer service team during this trip.  They always answer the phone by thanking me for being a ‘million-miler.’  I told the agent that I appreciated the acknowledgment as one of the few perks that hasn’t been 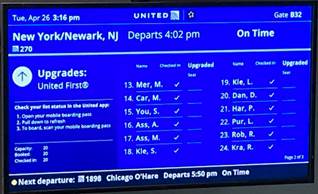 removed from the promised lifetime benefits.  I can still call and get a ‘thank you for being a sucker and believing us for decades’ whenever I feel like it.  I realize they should probably change the name from ‘million-miler’ to ‘fifteenth to twentieth on the upgrade list’ because that’s a much more accurate description.

·    Don’t you just love it when a flight purser announces that the captain has asked the crew to take their jump seats due to turbulence, so cleaning and preparing the cabin will have to be on the “honor system?”  Haven’t we US flyers proven by now that the honor system just doesn’t work?  Why do the FAs suddenly think they’re flying with an aircraft full of Klingons?

·    No matter how long I live I’ll never understand hotel housekeepers (or housekeepers / cleaning people in general.)  If I’ve gone to the trouble of moving a trash can to a more convenient place, or setting-up my toiletries in a certain way, why does the housekeeper insist on moving things around the way they want them?  Why can a cleaning person lift something up, clean it, clean where it was, then put it back?  Why do they insist on reorganizing?  And, while I’m on the subject of hotel housekeepers, I leave daily tips for them (understanding that it may be a different person each day so I can’t just tip at the end of a stay.)  I always leave a note that says “Daily tip for housekeeper, thanks!”  Why do they always remove that note making me re-write it each day of the stay?  I would look to see if I could get the phrase printed on a rock or other paperweight, but I wouldn’t want to have to travel with it.

·    Coming home after three days on the road it became clear that just about every aspect of the US travel industry is not prepared for the volume of travelers that are currently using the system.  The lines to get a bus back to the airport from the Las Vegas car rental center were the longest I’ve ever seen them.  And this was on a Tuesday.  They do not have enough drivers on duty due to a “nationwide bus driver shortage” that I was not aware of. 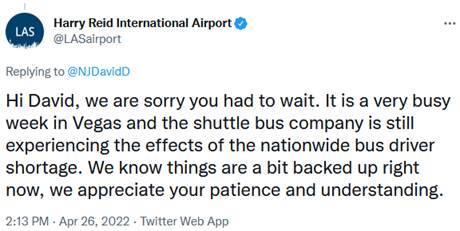 ·    I know that I and others often complain about what a cesspool Newark Airport is.  That may seem harsh but it’s totally true.  EWR is a terrible place no matter how you look at it.  It took an hour after landing for checked bags to even begin to start coming out, and then, after thinking your long nightmare is over, you go 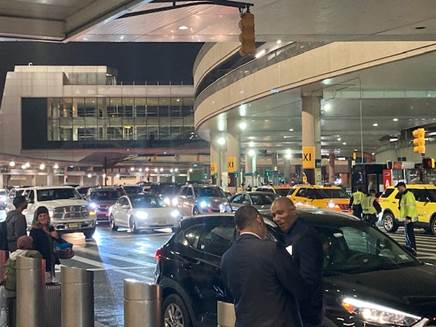 outside to get a car or meet your ride and the entire arrivals roadway is an even worse experience than the baggage.  Start with an airport exit lane being closed for no apparent reason that bottlenecks-up the traffic.  Then observe the twelve drivers standing on the sidewalk having what looks like a club meeting under the “Passenger Pick-Up 6” sign as their double and triple parked Surburbans and other enormous cars completely block that entire area with the three visible police officers not even asking them to move.  Only at EWR can you land a few minutes early at 9:23pm and finally be on your way home after two more hours at 11:40pm.

This is going to be a loooooong summer on the road for us travelers.