As I said starting my last blog, I’ve been traveling for business all my life.  Traveling has always come with its share of challenges.  Planes could be late, they could have mechanical issues, simply getting to the airport on-time can sometimes be out of your control, and bad weather has always had the final say.

As I packed for my latest business trip it dawned on me that there are a whole slew of issues (that are out of my control) which I never had to worry about in my traveling in the past.  One would think that after years of experience, the travel industry would be hitting its stride.  The professionals involved should be really good at the processes by now, with a large body of experience that should minimize any challenges.  On the contrary however, there’s now a decent sized list of challenges and problems that I know I never even considered just a few years ago.  Some of these are significant worries, and some are trivial annoyances.  No matter how much impact each issue has, as I’ve said many times before, even if the airlines and other travel service firms don’t shoot you with a proverbial bazooka, they’re likely to kill you with a thousand pinpricks.  Here’s my updated list of those.

·       Rideshare Windows – In years past, if you needed to take a taxi to the airport you’d reserve one with a local service and they’d have a car ready for you when you needed to be picked-up.  As most of the local taxi services have given way to rideshare companies the cost of taxi travel has been reduced, but so has the reliability.  I want a car to pick me up at 7am tomorrow, but I can only reserve a car with a fifteen minute window.  7:15 is too late to leave, so now I have to be ready at 6:45 in in order to be sure a car will pick me up by the needed time.  Those are 15 valuable minutes in the morning – especially when the pick-up time is as early as 4am or 5am.

·       The TSA – I probably don’t need to say anything more than the subject here, but the unreliability of the services these crack agents provide is a huge thorn.  Will I be in a line today for 20 minutes or an hour? Will they choose to rip-apart my technology filled briefcase this time, or will they realize that the whole point of my paying for CBP Global Entry / Pre-Check is to give up my privacy in exchange for being pre-vetted as a non-risk traveler?  There is no rhyme or reason for the rationale they use, making the security experience miserable.  There is no consistency between airports, no correlation between staffing levels and time of day, and there are still incidents of agents way-overstepping their authority to make people unnecessarily miserable.  With the insanity in US politics today, my hopes that this would be fixed soon have been dashed, as it’s surely a lower priority problem than restoring sane government, but I certainly expect that there will be a new incident in the not too distant future that will cause a shake-up.

·       Picking-Up A Snack – Let’s assume for a moment that you’re not eligible or you’ve chosen not to go to an airline club at the airport.  (I’ll avoid another detailed blog about how miserable the United Clubs at Newark are.)   What I do after clearing security is buy a bottle of water and – depending upon the time of day – an inflight snack, then make my way to the gate.  Amazingly, even these simple steps are now more challenging.  It’s almost impossible to find the most common, simple 16.9 ounce bottle of water at an airport.  You either have to buy a sports bottle sized container, or you have to buy an expensive designer / luxury brand of water.  The merchants (usually run by or in cahoots with the airline in one form or another) are overcharging you by so much that they feel they have to show a different product so that you don’t start a riot in the airport.  A case of water – twenty-four 16.9 ounce bottles – typically costs under $4.50 when not on sale.  The airports charge you nearly that much for just one bottle.  Yes, some mark-up should be expected for having to deal with transportation and refrigeration, but the going rate is simple robbery, facilitated by the security policy preventing you from bringing your own bottled water through the checkpoint anymore.  And – if being gouged isn’t enough – at many airports we now have to check ourselves out at a self-service kiosk.  The money isn’t even paying for employees’ salaries.

Getting To Your Gate – Having mortgaged your house to get the water, you now just want to get to your gate for the flight.  Remember all those moving walkways installed to speed you along?  At many airports the walkways and just simple corridors are being removed so that the airlines can stick more concessions right in your way.  Now, a pathway meticulously designed to permit the optimal flow of traffic has multiple choke-points where as little as two people standing in the way can completely stop the flow of travelers.  The greed involved in making the traveler’s already difficult chores more challenging is hard to believe.  Instead of calling this the airline industry, we should now call it the “air” industry, as bean-counters are consistently seeking new ways to monetize every imaginable bit of open space – be it on the ground or on the airplane. 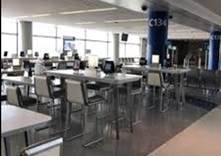 Sitting – Yes my friends, even sitting at the gate has now been turned into a more miserable experience.  Why let paying customers enjoy more legroom on the ground when the airlines are just going to deprive them of it on the plane?  The latest tables and chairs being installed at the airport are bolted to the ground.  Are you larger than a fashion model?  Expecting a baby? Need room for your carry-on?  Tough.  You’ll either have to squeeze yourself into one of these immoveable torture machines, or just stand – further blocking the corridors already narrowed by the concessions above.

·       Boarding – Is there any other aspect of travel that is as much of a caricature of itself as the boarding process?  In years past the airlines would let the disabled board, then first class, then their elite travelers, then the rest of the plane.  A simple and effective process.  But now that the airlines charge for checked bags, and as a result passengers bring way too much to fit in the storage bins, getting on the plane before anyone else is no longer a mania.  It’s now a necessity to ensure that there’s room for your things.  That artificially created, unnecessary supply and demand issue is being managed by the airlines through a complex boarding process that is best described by either the infamous Saturday Night Live Sketch or the similar Key & Peele sketch.  It is now a process where “Group 1” boards about fifth or sixth, “Group 2” boards even after that (and is ironically called “priority boarding” by the airlines) and lower numbers than that have to be considered the scum of the earth.  Airlines even offer this “priority boarding’ as a perk of having one of their affinity credit cards.  It wouldn’t sound like that much of a benefit if they accurately called it permission to board in the seventh group called.

·       Walking Off Your Plane – Expecting a High-Tech in 1958 Jetway to be available is now no longer a given.  Some airports (like my home EWR) now use gates that are nowhere near an entrance to the main terminal.  You either have to walk in circles down a crazy ramp, and/or actually board a bus and be driven to the terminal entrance.  Have a connecting flight and happy you landed on time?  Well, add another 40 minutes to get into the main terminal and see if you’ll still make your connection.  How will you know in advance if you’ll be subject to one of these inferior gates?  You won’t of course, that’s just the luck of the draw.

After completing the above list, I finished packing and went to sleep.  The next morning I headed to the airport, and amazingly none of these challenges were an issue.  TSA Pre-Check was a breeze, the airport club was not crowded, my gate was right next to it, my upgrade cleared, and the flight left on time and arrived early.  While I was thankful that the sky-gods were good to me on this trip, I know that the easy experience is sadly the exception nowadays.  If only I could always fly on Tuesdays late in the morning.