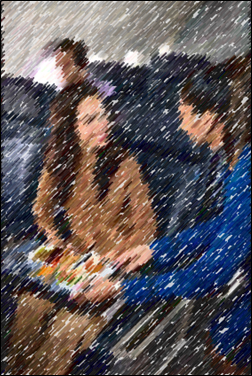 I boarded the flight on time, early of course because of my status.  I did not get an upgrade, so I made my way to the aisle seat I selected (27D.)  I put my roll-aboard bag in the bin above my seat – where there was plenty of room, and then took the things I’d need for the five or so hour flight out of my briefcase, then shoved that bag next-to my roll-aboard – there was plenty of room.

As I settled into the seat I started to scroll through the seat-back entertainment system.  I found two recently released movies I had not seen before, and started playing the first one – even before we took-off.  The seat in coach was not luxurious in any way, but there was actually plenty of legroom.

About forty-five minutes into the flight the FA came by and asked if I wanted “chicken or pasta” for lunch.  I chose the pasta, which was a very tasty lasagna.  It came with some fruit and a small, brownie sized piece of chocolate cake…and some pretzel sticks to munch on later during the movie.

With about an hour to go before landing – while I was well into the second movie – the FA came by again and gave me a power-bar snack to eat before we land.  We landed early.  The bags came out within 20 minutes of me getting to the carousel.

What I’ve described above is just about on par with any coach flying experience in the 1980s.  It is the kind of service that air travelers should expect when hundreds of dollars are spent to receive the service of transporting us from our home city to another one.

What we have to stop and realize however, is that the situation above is the far exception from today’s standard service.  Room for bags – ha!  Unless you’re one of the first to board a flight those bins fills-up very quickly, and checking bags instead comes at a price.  Legroom?  What are you thinking?  The airlines have learned that if they take away everyone’s legroom and reduce the number of aircraft flying they can fill their planes with more paying customers.  Forget any comfort, it’s not a factor in the decision.  In-flight entertainment systems with movies – almost never.  The norm now is airlines just buy their aircraft without any kind of IFE system.  You’re on your own to carry your mobile device with either content you can connect to or content you bring.  If you happen to connect to an airline provided system, your choice of movies may include few new release films, mixed with TV show repeats and titles that are dozens of years old.  Food on board – for free?  What are you thinking?  The airlines have long since removed that service.  You can buy a “snack-box” or in rare cases a fresh meal for about $10.  You have to use a credit card though, as cash in not permitted on the flight.

Oddly enough, all of the things we used to take for granted with air travel are now considered part of a premium service.  It is in fact United’s “Premium Service” (PS) that I described above.  As a United million-miler / elite flyer I am allowed to select seats in the Economy Plus cabin when I fly on a PS enabled flight, but most travelers have to pay more for it.

Airline analysts like to talk about how fares are generally stable or lower than they were years ago.  What they don’t include is the costs for these unbundled services.  It’s like going car shopping, agreeing on a price for the purchase, but then having the dealer ask you if you’d like to include the steering wheel, tires, engine, lights, radio, etc. – all of which you have to pay more for.

In this reality, my coast to coast travel always seems like time travel.  The airlines are very competitive on these premium service flights between the New York area and San Francisco or Los Angeles.  You can find just about hourly flights on this route (a true throwback to the past) all configured with an expensive (international quality) first class cabin, and often a decent-sized premium economy section.  Because of the frequency of the flights and the competition on the route, you can often find coast-to-coast fares at far lower costs then flying a few hundred miles on an awful regional jet.  And – if you happen to be elite on the airline you’re flying – you can experience a reasonably priced coach fare that may make you feel just like you’re flying in 1980 again.  It’s proof that time travel is actually possible.