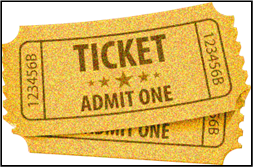 One thing us frequent travelers know about is tickets.  The very backbone of our traveling is based on obtaining tickets to board a plane, train or ship, and the ability to do things while we travel – like attend a play or concert – usually requires tickets as well.  The nature of tickets however is radically changing – and not necessarily for the better.  Ticket issuing companies are doing whatever they can to make the process more profitable for them and more difficult for us.  As we come-out of the pandemic we’ve been living through – one where the travel, hospitality and live events industries were severely impacted – we need to be aware of these changes and hopefully do something about them.

Going back in time, I am old enough to remember when airlines themselves used paper tickets.  The actual paper had the value – much like any currency – and each person boarding a flight needed to have one.  Then, in addition, we each needed a boarding pass – often stapled to the paper ticket, and taken from us as we got onboard the flight.  If you needed to make a change to your itinerary, you had better have your paper ticket to do so.  In 1994 the airlines introduced the e-ticket, and then by the mid-2000s paper tickets for flying were history.  Is it easier to check-in and board a flight?  Yes, however, the value of your purchase no longer transfers to you as a negotiable instrument.  It now stays with the airline.  I also remember the practice of buying tickets for flights using only a first initial and last name, and being able to let any family member use it.  E-tickets (and 9/11) stopped that practice cold.  Now we purchase airfare for only one specific individual to use, and we no longer have to get a paper boarding pass.  The QR code or bar-code on our mobile devices gets us on the plane.  The airline transfers nothing of value to us in the process other than the actual service.

Tickets for events have also gone through a similar revolution.  I can remember scheduling myself to wait in a line early in the morning at a venue or Ticketron location in my teenage years the day a concert or sporting event went on sale.  We always hoped there would be good tickets still left by the time we got to the front of the line.  There rarely were – but despite that, illegal ticket scalpers always seemed to get better seats than fans no matter how hard it was to get the tickets.  Eventually other firms came along to replace Ticketron, and then tickets by telephone, followed by tickets via computer purchase came along….as did unbelievably insane fees for using the ticketing services.  To quote from a June 2019 Vox article:

“For the August 2016 issue of Consumer Reports, the magazine’s staff drew attention to what they called the “ticket fee frenzy” by dissecting the price of a floor-level seat at a Guns N’ Roses concert taking place that summer in Kansas City, Missouri.

The ticket, which supposedly cost $250, would actually be $300.75 after fees — in other words, 20 percent of the ticket’s face value was tacked on in the form of itemized fees with confusing names.

There was a $19.50 delivery fee to cover expenses of mailing a ticket; a $4 facility charge set by the venue; a $4.25 order processing fee shared between the ticket seller, Ticketmaster, and the client, Live Nation, which happens to be Ticketmaster’s parent company; and a service fee, which was the largest, at $23. That money would go entirely to Ticketmaster.

While these particular numbers may be new to you if you do not live in the Midwest and attend canonical classic rock concerts, the gist is likely familiar. According to a study published by the Government Accountability Office in April 2018, the average ticket fee is now 27 percent of the ticket’s face value, with some fees as high as 37 percent. And Ticketmaster is regularly referred to as one of the most-hated companies in America — it’s the largest online ticket seller by far and has been under monopoly scrutiny since its 2010 merger with Live Nation, the country’s largest promotion and venue company.”

There was a time when people could avoid the insane extra fees the ticket sellers charged by purchasing tickets directly at the venue.  Most of these opportunities are now gone, as nearly all venues just use the Ticketmaster system to sell their own tickets.  (‘Why let people keep the 27%-37% fees if they’re willing to pay them anyway?’)  Now, in addition, in most cases, you can’t even get a real ticket anymore.  A couple of months ago my wife and I purchased two tickets to a concert taking place here in New Jersey (at the PNC Bank Arts Center) in July, and just last week we purchased four tickets to an August concert in Las Vegas (at Mandalay Bay’s House of Blues.)  In both cases the ONLY option was to receive an e-ticket on your mobile device.  You could not request a print-at-home ticket, nor a real ticket sent 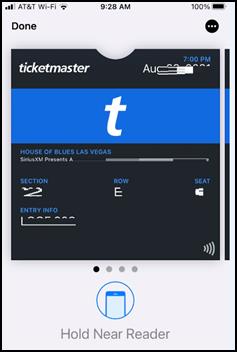 in the US mail.  (Even though they are not sending you anything, they still charged the same fees.  First it was a “service charge” fee for mailing the tickets, then a “convenience fee” for allowing you to use your own printer, paper and ink, and now they don’t even bother telling you what the fee is for.  They might as well call it a “we’re greedy, what are you going to do about it” fee.)  Worse than the fees, the tickets are now not even transferrable anymore.  They’re not even a bar-code or QR code delivered to you that you can share with your fellow attendees.  The information now lives ONLY on your phone.  It’s stored in the mobile device’s memory when you place it in your wallet app, and you need to use the device’s RF chip to be read at the venue to get into the concert.  That means, when I buy tickets for three other people to meet me at an event, I can no longer send them the tickets in advance so we can meet in the seats.  I have to wait for them outside the venue because only my phone has the tickets.

I happen to use a thick and hard-to-remove battery case on my phone, so using the RF chip is problematic for me.  I sent an email to Ticketmaster’s customer service asking how to convert my most recent purchase to real tickets, and here is the response I received:

Thank you for connecting with us regarding your ticket delivery for [order/xxxxxxxx]. Unfortunately, Print-at-Home is unavailable, so we are unable to email you your tickets. Mobile entry is the easiest and safest way to access tickets because your mobile phone IS your ticket.

This is also stated at the time of purchase before placing an order as it states:

*(Go Mobile: Your phone's your ticket. Locate your tickets in your account - or in your app. When you go mobile, your tickets will not be emailed to you or available for print.)

Easiest and safest?  It would be just as easy to send me four QR codes or bar-codes to get me into the venue.  I could email or text the images to the other three attendees and meet them in the seats – that’s what would be easy.  What they’ve done is make it as difficult as possible for me to give the tickets to anyone else – and that’s what they mean by the term safest – safest for them, not me.  They don’t want me reselling my purchase.  Heaven forbid I should become a ticket scalper that charges more for the ticket than I paid.  They want that privilege reserved exclusively for themselves.

Yup – remember the illegal scalpers I mentioned seeing above in my teenage years?  Now they are legal and what used to be the crime is perpetrated by the venues and Ticketmaster themselves.  They reserve any number of seats they want and charge you whatever they want over the face value – and then they still charge you the fees on top of that!  Easiest and safest indeed…

At least the companies that are gouging us as above are still confirming tickets for events.  Broadway theaters in New York have held onto the monies paid for tickets for cancelled shows for well over a year and a half – and despite a confirmed opening date for most Broadway performances to resume, many have still not provided a date or time or confirmed seat for these past purchases.  The Hudson Theater in New York has had our $198 for two balcony tickets (plus a $22 “service fee” and a $3 “order processing fee” of course) since September 2019.  Not only have they not told us when we can attend or how to get a refund, they have actually provided absolutely no way to contact them to get information.  Here’s what is says on their website. 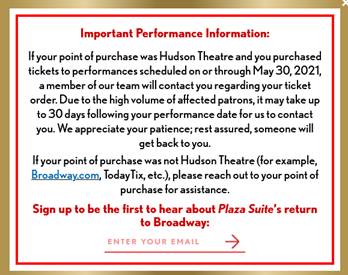 The pandemic certainly wasn’t their fault, but not being able to reach them on-line is a travesty.  They used a ticketing system for this play called “ATGTickets.com” to sell the tickets, and when you try to reach that firm they reply that they now only work in the UK.  When you email the Hudson Theater it goes to the Hudson Theater in Los Angeles, not the one on Broadway.  Ugh!  Who knows if this show will even happen?  Perhaps I should charge them a “contact-difficulties” fee every time I make an attempt to find out and just send them the bill.

What does all this mean to you?  Well, it’s clear that the days of obtaining a transferrable paper ticket for any reason are over, and just as clear that the event ticketing industry is ripe for yet another class-action lawsuit.  Some sharp attorneys (possibly reading this right now) will make a bundle on the fees, we consumers will be given an opportunity to vie for impossible to obtain tickets for a non-attractive event or two as a make good, and nothing will change.  The only paper tickets left on the planet seem to be the kind that traffic enforcement officers give out – and nobody actually wants them.