Regular readers of my travel blogs over the years know I’m not shy with my opinions and complaints about my home airport, Newark Liberty International (EWR.)  Well, the most recent JD Power survey of North American passenger satisfaction conclusively proves my opinion is shared by most.  EWR is the worst large domestic airport.  (Click the photo if you want to read the actual results.) 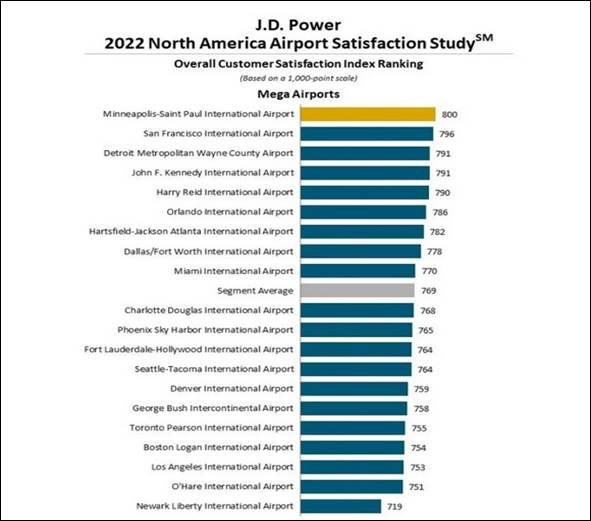 When it comes to being the worst, way to go United, we’re Number 1!  (And the runner-up is O’Hare, also a large United hub by the way.)  I was at EWR this week for a round-trip to Dallas and I can confirm that the level of suck is still at its peak.

I’m sure United’s response to this last place finish will inevitably be ‘my dog ate my homework.’  With them it’s always someone else’s fault.  In this case they’ll point their finger at The Port Authority of NY and NJ who will inevitably point back at United or at their own union labor.  That bi-directional finger pointing is one of the prime issues for the status.  There’s no reason to improve things for customers if every problem is someone else’s fault.  But the fact that United’s finger is squarely pushing hard on the make EWR suck more button is undeniable.  Here are just some of the reasons I’ve covered over the years that the EWR experience is terrible: 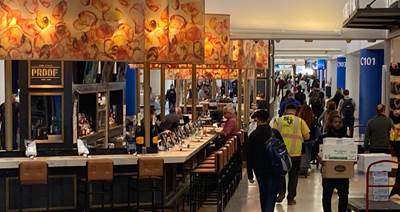 Bottlenecks: EWR didn’t have space for any additional retail establishments nor restaurants, so they removed all the passenger helpful moving walkways and put the restaurants right in the walkways of the terminal wings.  Now there are frequent, impossible to bypass bottlenecks as passengers try to get to their gate.

·    Security: EWR has never changed their legacy terminal designs that were implemented before heightened security was a thing.  It is impossible to get from wing to wing in terminals A and B unless one takes a courtesy bus.  United flying out of terminal C does not have this problem, but United also flies out of terminal A and occasionally (with no rhyme or reason) out of terminal B, which leaves passengers with no easy way to anticipate and make connections between them except by a bus that drives on the tarmac.  To get to it, one has to walk stairs, ramps and other obstacles while carrying their carry-on bags.  There are also still gates at EWR that have no Jetways – they are buss access only.  In addition, while Terminal C has real TSA Pre-Check lanes, Terminal A does not.  All Pre-Check passengers will get there is a pass to skip taking off their shoes.

·    Clubs: As I’ve mentioned many times the United Club situation at EWR is awful.  The good club between

the C2 and C3 wing was stolen from paying members and converted to a Polaris only club about five years ago.  ‘Don’t worry’ United told us, they were building a new club for the C3 wing.  Until it was ready everyone had to cram into the C74 overhead club that was dated and overcrowded.  This year, when the C123 club finally opened after the five years, they loudly proclaimed the success of the new facility and conveniently didn’t mention either how long it took or the closing of the C74 club (which will now make the new one overcrowded and inconvenient for C1 wing travelers.)  I and many others have just given-up on the tortured experience.  Joining a club – which was once a savvy move by smart travelers – has simply turned into a pain in the rear to be avoided.

·    Passenger Pick-Up Free-For-All: Once you land at EWR and need to meet a friend, relative or ride-share 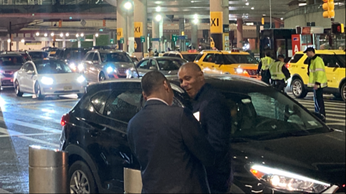 car at terminal C, you have to navigate a total mess.  The airport allows limos and black-car drivers to double-park at the curb of the pick-up areas for hours at a time without doing anything about it.  Here to the right you can see two drivers actually out of their parked cars (in a no standing zone) shooting the breeze while the police and terminal authorities right there watch it and do nothing.  This was happening near the “Passenger Pick-Up 6” area, while passengers trying to get into their rides had to walk into traffic to reach double and triple parked cars, but it happens all over the arrivals level all the time.  It’s a zoo.

·    Comfort: When the Terminal C gates were updated a few years ago, normal airport seating was removed and tables and chairs were installed that have their seats bolted to the floor.  It’s not enough that the aircraft seats are too small for the average passenger, the seats at the terminal are also a shoe-horn squeeze to get into.  If I wanted to make passengers uncomfortable for longer than just the actual flight time this is exactly what I would have done.  I don’t think United did it just to make passengers uncomfortable, as I’m sure there were maintenance arguments why this would be a better idea, but my point is the discomfort of the passengers didn’t even get considered in the plan.

·    Concessions: If you want to get a standard bag of chips or other packaged snack, or a fast-food meal, you’ll be hard-pressed to find any at EWR anymore.  In order to receive less complaints about how high the prices have been jacked-up, most stores now only carry gourmet labels and brands.  In case you’re thinking this is another Port Authority thing just look at the check-out terminals (which you have to operate yourself now 90% of the time.)  You can pay in cash, credit or United miles.  United is behind this 100%.

Faced with the above I’m often asked why I and others don’t go to one of the other NYC airports and fly an airline other than United.  There are a few reasons for that.  I and many others live in New Jersey.  Going to JFK takes two to three hours, as opposed to the fifteen minutes it takes to get to EWR.  If I were to decide to use JFK anyway I’d also need to spend about $200 for the taxi ride there, or pay a similar price to park there.  It’s not really an option.  In addition, there are precious few airlines serving EWR with non-stop service other than United.  Deregulation and airline mergers have seen to that.

There was a time, three or four decades ago, when EWR was a sleepy little airport and NY’s “best kept secret” as the ads said at the time.  The problem is nothing has been done to improve the passenger experience since way back then.  Yes, work has been done at the airport, but nearly all of it improves things for the airline’s bottom line, not for the users.  So as I said, we’re number one in being terrible, and us locals don’t expect anything to change anytime soon.