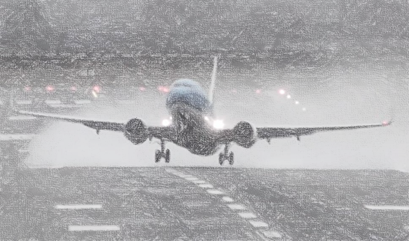 You hear the screech of the tires and feel both the jolt of hitting the ground and the G-force of the reverse thrusters kicking-in.  You made it, and that of course feels good.  Maybe you know you’ll be on time for your meeting or event.  Maybe your long delay is finally over. Maybe your anxiety over being told your airport is inaccessible has abated slightly as you touch-down where you were diverted to.  Whatever the specifics, both the novice flyer and the seasoned traveler universally feel some sense of relief when the airplane lands.

We know – hopefully only deep down – that flying is somewhat dangerous, and most of the danger has passed when we’re no longer defying gravity.  Some part of us is relieved that this won’t be one of the fraction of flights that ends in tragedy – because we’ve made it back to the ground in one piece.

If you happen to have landed at a modern yet smallish airport – say RDU or SNA or MCI or similar – your plane makes its way over to your gate and you get off – simple and easy.

If however, if you happen to be landing at a large hub in a big city – say EWR or DEN or SFO or similar – it’s entirely possible that your ordeal has not yet come to an end.  Is there a gate ready for you?  Is it empty or has the prior aircraft not departed yet?  Is there a ramp crew and/or a Jetway operator there to meet it?  Can you even get to the gate or are there other aircraft in the way?

These frankly are questions we should not have to ask, but often need to.  In good weather some airlines ‘hub and spoke’ models have many aircraft landing at about the same time that create bottlenecks.  A small number of departure delays can clog the ground traffic on an otherwise clear day at some airports.  Of-course, in bad weather then, all bets are off.  There are often dozens of aircraft waiting to take off, still stuck on the taxiway, blocking incoming flights access to their arrival gate.

The human elements of passengers landing are simple and obvious.  Some people have connections or meetings to make (and some people have been ‘holding-it-in’ and just have to ‘make.’)  When there are delays after landing people are no longer ‘forgiving’ in understanding their safety is the prominent concern.  They’re on the ground, so they think falling out of the sky is no longer on the table, what the heck is the problem?

There are now rules about how long people can be kept on the tarmac before a flight takes off, how much food and water and access to bathrooms they must provide, etc.  I don’t believe these rules apply to after landing.  How long is a reasonable delay after landing before passengers are able to get off the plane?  At what point does an arrival delay become unreasonable?

Is it OK for an airline to land an aircraft on-time yet have the delay getting to a gate cause a missed connection?  Is it OK for children (or adults) to either wet their pants or break the ‘seat-belts on an active taxiway’ rules and run to the restroom on-board?  That depends, of course, on how long the delay is.  Regrettably, getting airline personnel to tell you the truth about the estimated delay of anything is one of those clearly impossible things in life.  It’s 50-50 that airline personnel either know but don’t want to tell you, or they don’t have a clue themselves.

I ran into this problem last week on a United flight (of course), on a perfectly clear day at EWR – when there should be absolutely no reason to have no gates available.  Apparently our assigned gate was still occupied, so we had to take – in the captain’s own words – a “tour of the tarmac at Newark” to get out of the way so the gate could clear.  When we finally arrived back at the approach there was another plane ahead of us, so the delay was extended until that flight could get into its gate.

My chat with the United team on Twitter again led to no satisfaction of course: 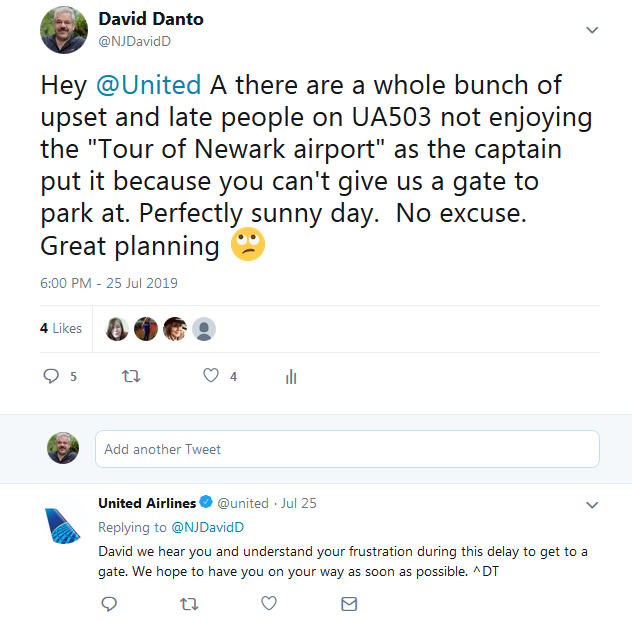 There was simply no reply to that last tweet.  About halfway into the delay, the mom with the two year old son sitting behind me bolted to the restroom to prevent a disaster.  Two FAs got up and yelled at the mom, standing with her son at the open bathroom door as he was urinating.  Her actions bothered them, not the fact that the aircraft was circling the tarmac in Newark for about a half hour after landing at that point.

If there were thunderstorms in the area I’d understand the delay.  But at about 5:30pm on a day that was clear and sunny for miles and miles, the only reason I can assign to such a delay when the flight arrived as scheduled is sheer operational incompetence.  Were there too many broken gates?  Was there a shortage of ramp workers?  Whatever it was, it was clearly preventable with better management.

This of course is not the first time I’ve experienced such an inexcusable arrival delay.  Heck, Denver has a specific parking area for planes waiting for gates, a fact that is inexcusable in and of itself.

What do you think?  How much of a delay is reasonable after landing?  Send me a note if you have thoughts on the subject and/or experiences you want to share and I’ll publish them in a later blog.  After all – if we don’t call the airlines out on such poor behavior they’ll only get away with it even more often.