“My wife and I were presented with a summer opportunity to travel.” With COVID (hopefully) waning, my employer giving everyone the holiday week off, and our desire to get-in some relaxing down time, we decided to book a stay at Sandals Royal Bahamian in Nassau.  We probably would have preferred to go to Maui instead, but with just the one week available it didn’t seem like it would be worth the schlep.  Sandals had recently refurbished / built some private villas on their Nassau property, and they were offering us a premium priced package that included “butler service” – a level they describe as the epitome of luxury.  It would be our first experience with an ‘all-inclusive’ resort.  Ultimately, while we had a good time there, there were some significant issues with the trip.  My wife and I (again) found ourselves asking if it was just our expectations always being too high, or if the property just didn’t measure-up to its own hype.

Our trip started out great.  We snagged a crazily inexpensive round trip to NAS on United – about $400 a ticket – with our departure on July 4th.  With the current loads of cancellations and irrops at the airlines right now we were lucky to experience no delays or disruptions on the way out.  In fact – it was the first time ever that she and I were both upgraded to first class on United.  As a Million Miler (and her at the same level as the spouse of one) we’re both lifetime gold elite, and that’s usually wayyyyyy down on the upgrade list.  What it meant was there simply weren’t a lot of people on this flight.  (It also reinforced the legacy stupidity of how United – and Continental before it – saw the world geography.  The Bahamas is clearly international travel, but for upgrades they treat it as domestic, harking 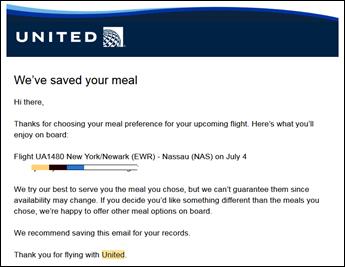 back to when Gordon Bethune saw Newark as New York and Hawaii as an international destination.)   I was upgraded a few days before the flight, and my wife just before boarding began.  United offered me the opportunity to “pre-select” my meal, which I did (and got a confirmation email) but which the FA was apparently never notified about.  Luckily they had something similar to my choice for sale in coach and the FA just grabbed it for me.

When we landed at NAS, we walked the loooooong three or four football-field lengths it took to get to the immigration desk (ugh), retrieved our checked bags, and then went out of the customs exit.  At that point we had expected our schlepping to be over.  Sandals had promised our level of “butler service” would meet us, take our bags, hand us champagne, escort us to a limo, and take us directly to our room – where we would meet our personal butler, be greeted with refreshing lemon-infused towels, and check us in directly in our room.  Did they do that?  Um…well…not quite.  When we got to the Sandals lobby in the airport there was already another couple sitting there who had been waiting for their limo for about 45 minutes.  There was no champagne – only a bottle of water – and in fact there weren’t even any seats available for us to use – the agents had to give us their stools so we could sit.  We eventually got into a car and to the resort in about an hour.  It already had us thinking ‘this isn’t what we were promised’ and sadly it only got weirder from there.

The limo dropped us off at the property’s main entrance, and instead of being taken directly to our villa as we had expected, we were walked to a “butler reception” room, which was just an alternate reception desk, not a ‘you go right to your room’ experience as we had been promised.  We then sat for another 30 minutes while they ‘found’ our butlers.  It was already a little after 3pm and were starting to lose our patience after a day that began at 5am back home, but we still were not complaining – just surprised and disappointed.  When one of our butlers finally arrived he then walked us to our villa.  It happened to be just pouring from the skies at that point (an amount of rain that made umbrellas nearly useless) and I was still carrying my heavy shoulder bag (my choice, as it had my critical personal items and papers in it) so needless to say we arrived at our villa just soaked, and completely exhausted, but relieved that maybe the hard part was finally over.  Nope.

Opening the door to our villa, our bags were not there yet (so I couldn’t change out of my soaked shirt) and NONE of the preferences we had exhaustively completed weeks before (at the request of the property) were present.  We had asked for some fresh fruit and some juices, sodas and fresh milk for coffee – none of that was there.  Instead we had the half-dozen bottles of liquor we said we didn’t want.  There was also a tiny plate of soggy crackers with inedible toppings on them (that must have been sitting there for hours) and a bottle of Brut chilling.  None of our pillow and bedding selections were there – in fact, nothing that we had asked for was there.  There wasn’t even a resort map or event schedule in the room.  We were told all of that is ‘on the app we needed to download.’  I tried to connect my (and my wife’s) phone to their internet without any success.  Our butler said we needed to ‘change our phone’s network settings’ to connect.  It was at this point that sitting there – exhausted and soaking wet – I started to lose my cool.  This certainly wasn’t the level of experience we thought we were paying for at nearly $2k per day.  The butler tried to help, but honestly he was like ‘all the kings men’ trying to reassemble Humpty-Dumpty – it just wasn’t possible to reassemble the promised experience from all of the broken shells.  We asked him to try to bring some of the food and drink items we had originally requested and asked him to leave so we could try to get dry and comfortable.

After he left (and the bags came) I then did what I always do – plug in my devices to charge and connect to the internet. At that point it was two iPhones, two iPads and one PC all having issues connecting to their local WiFi.  They would connect but then could not successfully get internet access 90% of the time.  As an engineer I looked for the WiFi router/access point in the room to try to reboot it but could not find it.  I then called the operator to ask for some IT help.  She said I should go to the front desk so they could show me what I was doing wrong.  I explained that five different device errors proved that the problem was in the room, and asked her firmly to connect us to someone that could help.  The next person also wanted me to bring my phone somewhere to show me what I was doing wrong.  OK – it was at that point that I finally lost it.  It had been a long day and I was wet, tired and disappointed and being told that I was the reason their internet clearly wasn’t working.  I asked for the General Manager of the property – who I then promptly unloaded on.  What the hell kind of facility were they content on providing with only the promise of a premium experience?  The manager then told us that “their internet provider had been having some issues and they were working on it.”  (This is actually something we were told by managers a number of times while at the resort – as if the fact that their provider is failing somehow absolves them of responsibility.  All the ‘we’ll show you what you’re doing wrong’ was just BS to delay and hide the fact the resort simply did not provide reliable service to this part of the resort.)

The villa – while pretty and with its own outdoor plunge pool and tub – was honestly weird.  Let’s start with a couple’s romantic villa only having one robe in the closet. Really?   They sometimes rent this romantic villa to single guests?  Then the bathroom is also weird.  There is no door – something I discovered while in the shower when the doorbell rang.  How does one build a bathroom without even a pocket/slider door?  And that ‘romantic outdoor private plunge pool and tub’

has line-of-sight to about three other ‘romantic outdoor facilities’ and nothing resembling the “privacy curtain” that was promised.  It’s not exactly what I’d call “private.”  The privacy also was shattered a bit more when a rather large (about a foot long) rodent whose face was a dead-ringer for Remy in Disney’s Ratatouille pressed his little nose on the glass of the sliding door, looking like he wanted to get into the room.  (No, I didn’t open it to ask him if he was the chef that spoke French or had any of the food we had requested.)

Later that day, after trying to calm-down a bit, we walked around the facilities, took-in the beautiful pools and ocean view, and saw some of the included restaurants.  Most of them supported walk-in service, but a 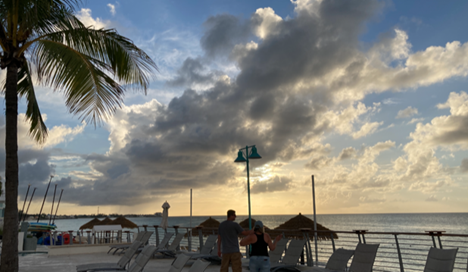 few required reservations.  The line that “your butler can get you in” turned out to actually be “your butler can TRY to get you in, but no promises.”  This was really the story at the entire property – the promises made to get you to book the trip were never really 100% of what the resort actually provided.  In every case it was over-promise and under-deliver.  I suppose – as we learned a few years ago on a booze-cruise – that when you’re a drinker (which my wife and I clearly are not) a lot of these issues don’t bother you that much when you can have all you can drink in your room and at every bar, and you walk around so sloshed that you’re falling out of your shoes (which we saw a couple of times on the first day.)  I would have much preferred to have been promised less (at a lower cost) and had those promises actually met.

Ultimately, we made the best of our four (rainy) nights there, but were never able to lose that sense of disappointment that the first few hours left us with.  Our butlers actually turned out to be awesome, working hard to bring us the things that would make our stay as pleasant as possible.  There just was never enough here to justify the cost, and many things never actually got better.  For one example, I had to work on this blog using my iPhone’s Personal Hotspot because the intermittent internet – which is obviously an issue they were well-aware of – didn’t improve at all while we were here.  For another example, the public pool with the only nearby hot-tub was roped-off with yellow caution tape (for repairs) for our entire stay.  How the property can get away with blaming their contractors for service they promised to provide to guests is beyond me.  Perhaps, if I went to one of the dozen or so bars and had another drink I might not care as much…..