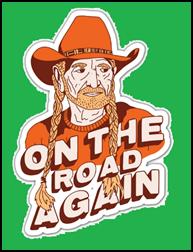 Continuing from last week, the Vegas portion of my end of August road trip was over and I needed to head to Indianapolis for a business conference.   As I have mentioned many times, I’m loathe to check bags on brief trips, but in the times of COVID I have to break that rule.  We’re carrying extra supplies, masks, sanitizers, an air purifier, etc., so checking was a requirement.  Our bags came out upon arrival to Vegas very rapidly.  Coming home to EWR – not so much. 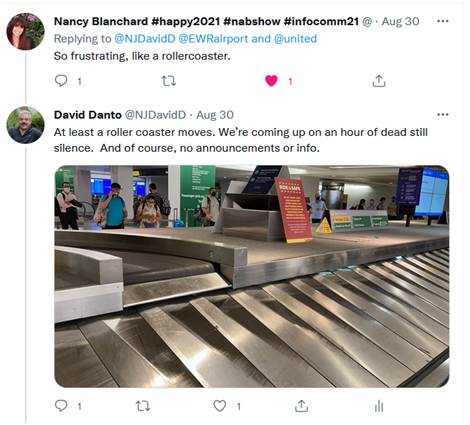 After about an hour and a half of waiting and listening to useless announcements, the United baggage team finally said: “the door is jammed on the plane” so they can’t get the bags out.  This is on a 739 (#3835) which I could immediately recognize as fairly new because it had the new style overhead bins and vents but no IFE.  I’d have to assume poor maintenance is to blame, but who knows.  The sad thing is United will show this flight as arriving 35 minutes early, instead of 90 minutes late.

Having lost a bunch of time on what was going to be a short turnaround anyway (thanks again for that United) I arrived home and then headed to the airport five hours later for my flight to Indianapolis.

Upon landing at IND it was a quick bag pick-up and a Lyft to downtown next to the convention center.

In Indiana, the contrast is stark with New Jersey and Nevada.  Almost no locals are wearing masks.  The convention center had signs up “strongly encouraging” it, but from what I saw only employees and some out-of-town visitors were wearing them.  The locals didn’t care.  I absolutely hate how the science here has become politicized.  As I’ve said many times, a plague that only kills stupid people would not be so bad if there weren’t so many innocents that get caught-up in the fray (like children under twelve and the immunocompromised.)

When I arrived at my hotel – the Westin Indianapolis – I was a little taken aback that the property was undergoing some major construction.  As it turned out it didn’t really get in the way, but it impacted things like room service and service in general.  I was also given a sheet with hotel information which showed (way on the bottom):

Now I ask, does your typical conventioneer understand that ‘Daily Stayover Service’ and ‘amenities’ not being provided means that the rooms will not get visited by housekeepers for cleaning and fresh towels?   I doubt it.  I’m doubly offended that the Marriot chain is both hiding behind COVID to reduce service without a reduction in costs, and that they are hiding behind cryptic language instead of just coming out and saying “we’re only providing housekeeping upon request.”  I don’t mind the reduced service, I mind the deception for profit.

The other weird thing about this property is that it’s the first I’ve ever stayed at in the US where the bathroom has neither a window nor visible vent.  I thought that was part of required building code everywhere.  As you can imagine, the room gets mighty steamy during a shower.  The desk clerk assures me there is a hidden vent in the bathroom’s overhead soffit, but I have my doubts.

The conference I attended was a mixed bag.  I was happy to be there to represent my 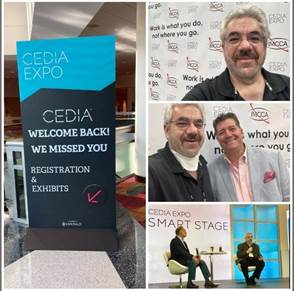 industry association, and met with some great people, but many vendors pulled out of the event due to the Delta variant, so the crowds were sparse.  You can get an idea of how day one went by looking at this one minute highlight video.  (Look carefully and you can see me opening the event on the “Smart Stage.”)  I (and many others) would have preferred to see the organizers require masks and vaccinations as many conferences are now doing.  Instead, they followed the guidance of the jurisdiction – which essentially was the honor system – which as I’ve stated in past blogs has shown it doesn’t work – so I was one of about half of the attendees wearing a mask (except when I was on stage.)

As the conference ended its first day I was reminded that COVID may be the newest reason for travel complications, but it is far from only reason.  There are still the boatload of issues that existed pre-Covid that we still have to deal with: 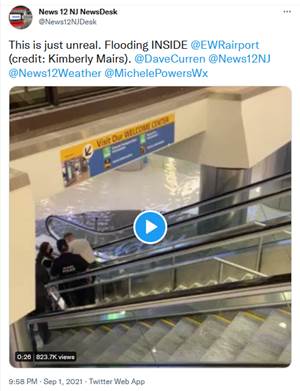 The remnants of Hurricane Ida pounded the NY and NJ area heavily Wednesday night.  If you click the picture above you can see the twitter video of EWR being totally flooded during the height of the rain.  (At least NOW they’d have a legitimate excuse for not getting bags delivered as guaranteed on time.)  My hometown was also hit pretty hard by flooding.  My house and my family were lucky and spared any damage.  (You can call that ‘lucky’ if you think its luck when an obsessive home buyer over 20 years ago made sure he bought a house up on a bit of a hill so it would almost never flood.  Before my father passed many years ago he used to say “luck is only when opportunity meets preparedness.”)

For the journey home I arrived at the IND airport quite early as I had never been there before.  It is a very pretty and well run operation from what I experienced.  TSA Pre-Check worked exactly like it was supposed to – short line, quick x-rays, brisk walk through a metal detector, off to the gate.  I don’t understand why smaller airports like IND, RDU or even LAS can get Pre-Check right and my home EWR insists on rummaging through my luggage almost every time.  Either the smaller airports are a security weak-point or the bigger ones are crazy – it can’t be both.

I was looking forward to my first flight on the heavily touted CRJ-550 – the one that ‘brings first class service to regional jet travel’ or some such jargon bragging to that effect.  Honestly, I wasn’t impressed with the aircraft.  Its big claim to fame is that it’s longer – with enough room for a couple of bag storage bins between first and coach making gate-checked luggage rare.  Yes, it is a better experience than an Embrarer-145 (the other 50 seat RJ United flies) but not nearly as good as the EMB-175.

The 175 has good seating in first and has a forward lavatory in addition to the rear (which the CRJ-550 does not.)  Here are some photos of my view of the CRJ-550 from seat 2A.

You can see the storage bins over my shoulder.  There is also an improved armrest with mini-tray that can hold a can and a cup at the same time – which is better than having to take out the tray-table (both located on the left, not the right.)  Also, the “premium cabin, self-serve snack station” was empty.  The FA apologized that United Express ‘didn’t bother to cater the flight with anything edible, and only provided limited beverages.’  I’m not sure how a snack station is worthy of inclusion in a promotional video but not worthy of being stocked.  Maybe it’s a COVID thing, but the ticket price sure wasn’t any lower.

We landed at EWR terminal A after a thankfully uneventful flight.  As I walked past the United Club down the corridor there was a sign posted in front that said “this club location is closed,” once again reinforcing my good decision to tell United to shove their club membership last year.  Here in Terminal A, on the older style baggage carousels, my bag came out five minutes after I arrived – in fact – it was the first bag to be delivered.

So, looking at the entire trip (covered in last week’s and this week’s blogs) in retrospect, here are my conclusions.

·      COVIDiots are still ruining things for everyone, especially in states without mask mandates

·      One can travel safely in these dark times, but extreme caution is needed (including N-95 respirators at all times, outdoor dining only – or indoors in wide-open spaces if you bring an air purifier, and all of the other precautions I listed here.)

·      Get vaccinated ASAP, and if you have any health issues get a booster as soon as you can

The simple fact that COVID is still around won’t stop me from traveling for pleasure or business.  What WILL stop me – and probably the most important advice in this blog – is if the place I am traveling to is so overwhelmed by COVIDidots using-up all the hospital beds that they can’t provide effective emergency care.  That’s a risk I won’t take.  That sadly strikes my two planned trips to Florida off of my schedule.  Florida is in such a mess due to the insane politics that there is now a water shortage because the oxygen usually used to treat it needs to be diverted to the full hospitals.  That seems to be the only critical deal-breaker in all of my travel planning.  I won’t risk my life in areas where emergency care is compromised.  If an unexpected appendicitis…or just breaking a bone tripping in the jetway will subject you to futile hours of looking for an available emergency room at your destination, then IMHO you shouldn’t be traveling there.  That’s a risk no one should be willing to take.  Check the hospital capacity before you decide to travel anywhere.  Heck, the Governor of Hawaii is pleading with you to stay away for those and other reasons.