The Flying Rules Are Not Working 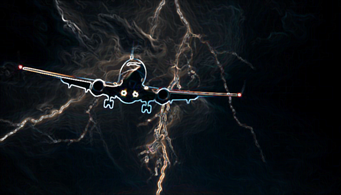 “This is going to be another blog where I rag on United airlines.  They let me down again yesterday – which honestly wasn’t a surprise and didn’t really result in much pain.  So I’m a bit upset, but clearly lucky.  I’m writing it in trip report format because I think there is something to be learned – and things that the airline industry and FAA need to fix – yet I’m not really sure where that effort would begin or what it would look like.  Hopefully readers can email me with good suggestions and I can share them in a subsequent blog.

My young adult son has been in Austin for the last couple of months.  We didn’t know exactly when this summer he’d be heading home, so we bought him a one way (full fare) ticket there, and were waiting for a return date.  It turned out he needed to be home this past Friday (July 9, 2021) so we bought him another one way (full fare) ticket home on United 271 from AUS-EWR, scheduled to fly at 12:15pm and land at about 5pm.  Everything was all set…then hurricane Elsa came around.

The hurricane swept through the eastern seaboard earlier in the week, and was scheduled to cross the EWR area Thursday night into early morning Friday.  I was 100% sure it would be long gone by the time that my son would be landing.

At about 4am Friday morning I checked my United app on my bedside smartphone and saw that the flight had been “canceled due to weather conditions on our route network.”  At that time I tried to call the United Premier line to see if I could arrange an alternate.  The automated operator said the wait time to speak with an agent was ‘hours.’  OK, I get it – waste of time there – so I looked at United.com to try and find an alternate non-stop flight, maybe the next day.  No non-stop flights show-up as available for at least a week.  (By that time I’m clearly getting frustrated about how hard this was becoming.)  United automatically rebooked him (from a first class, non-stop, paid ticket) to a route that flies him west to Denver in the middle seat in the last row, gives him an approximately six-hour layover in Denver, and then puts him back in first on the redeye to EWR, landing Saturday 5am-ish.  Honestly (and I really mean that) I don’t know if I should be offended at the ridiculousness of that itinerary or thankful they tried to get him home.  But it clearly was a last-resort sort of thing.

What I did next was look for alternate non-stop carriers from AUS-EWR.  There was one, and it was available, on crappy Spirit Airlines on an A320.  The one way fare in their up-front seat was equivalent to the United ticket, so I figured what the heck and just purchased it for my son.

I then researched what would happen in order for Spirit to successfully execute that flight.  Their A320 would need to complete a leg from Myrtle Beach into EWR (arriving around 11am), then fly EWR to AUS (arriving around 2:30pm) then fly him home on a 3:45pm flight (arriving at about 8:30pm.)  If there truly were elements of a hurricane lingering around the EWR air-traffic area my son would be just as screwed, and would be spending those six hours in Denver before the redeye.

I went back to sleep and got up at about 7:30 am Friday morning.  When I woke-up the rain and wind were long gone.  My radar app on my smartphone showed the last elements of the storm only affecting the tip of long island and rapidly moving away northward.  The ATC app showed there was no weather delay at EWR at all.

Savvy frequent flyers can probably figure out what happened next.  The Sprit flights each had about 30-45 minutes of delay, but flew with no issues.  My son made it home about three and a half hours later than his original itinerary. 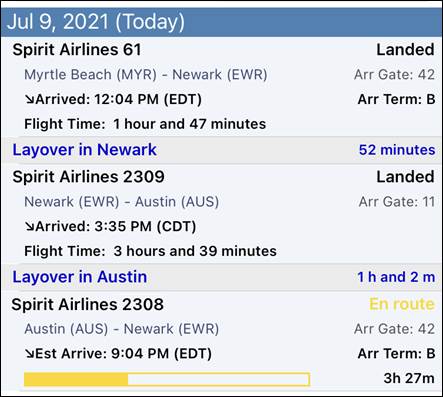 This of course raises more questions than it answers.  Why would United completely cancel a flight from AUS – EWR 24 hours before it was scheduled to fly when the aircraft and crew were already in Austin?  Any competent weather forecaster could have told you that by the arrival time the storm would be long gone.  We can be paranoid about it and believe that because it wasn’t a lucrative or expensive route United just used the ‘cover story’ of the storm to either save money or use the crews or equipment on a more lucrative route.  Or, we can look at how all airlines have botched the recovery from the pandemic, not keeping enough staff on-board, ready to go and fully employed – even though the US government (all of us) gave them boatloads of money to do just that, and United just didn’t have enough staff to handle the load.  Or we can simply look at the load flying into the United hub at EWR and realize they were overburdened with the recovery from the hurricane’s irrops the day before and needed to shed-load somewhere.

One other opinion that came from Joe Brancatelli was that this is all a result of the regulations penalizing airlines for long tarmac hold times.  Instead of normalizing flight schedules to what reality can actually support, or treating passengers with more courtesy – the things the regulations were meant to do – what they’ve actually done is push airlines to preemptively cancel many more flights (rather than risk being in the long-hold situation.)

I honestly don’t know which one or combination of those was the reason, but it is clear United (just like the other US airlines I’m sure) can’t handle the loads they are now experiencing.  I was not able to get through to their agents at all on the travel day.  Not even in the evening when I just wanted them to process the full-fare refund for the cancelled flight.  At about 6 pm I called the Premier line again and received an automated message that I had a “10 to 15 minute wait.”  About an hour later I finally gave up and hung-up (as you can see the moment just before that from the screen grab below.)

The following day I called it again and was told the same “10 to 15 minute wait” but this time opted for them to call me back when they were available.  For this one it was exactly a sixteen minute wait for a call-back, but then that call stunningly came from their automated attendant and it told me that I was “first in line” and I still have to wait on hold for an agent!  If I was actually experiencing an irrops at the time and got called and then immediately put on hold I’d likely have had a cow.  I’d have expectd an agent to be the one calling me saying “Hi Mr. Danto I have your account in front of me.  What can I do to help you?”  Who at United actually thinks such automation is a good thing?

So what do we conclude from all of the above?  First of all, rest assured I have complete perspective.  As irrops goes this one was a walk in the park.  People have been stranded in the middle of nowhere with no place to sleep – sometimes for days.  The fact that there was no real pain here has not escaped me.  (And the fact that my impact was only minimal because I’ve jettisoned any illusions of airline loyalty and just paid cash for full priced fares was also a significant factor in my favor.)

Still, it’s fair to ask any number of questions.  Why can a rinky-dink operation like Spirit can fly in conditions and at airports where United felt the need to preemptively cancel?  How often is weather used as a cover story by airlines for other issues?  Do we need to re-regulate the airlines and get control of the current ludicrous flight schedules?  Are the tarmac hold rules helping the flying public or hurting us?  Why didn’t United and the other US airlines keep-on the staff we paid them to keep with the pandemic bailouts?

As I mentioned, I don’t know those answers and would love to hear from my readers what you think should be done in the industry at this point.  As a million miler, flying for more than four decades, I don’t remember conditions being worse than they are today, or remember a time in the past when some rain caused total havoc for one of the top US airlines but saw one of the smallest carriers manage through it with minimal impact.