We all know the story from our childhood about the fifth little piggy.  I can now definitively tell you that it very much didn’t cry “wheeee” all the way home as we’ve been led to believe.  If it said anything it was more like “ouch.”  You see, both of my ‘pinky-toes’ have been painfully bending in toward my other toes for nearly twenty years now.  It was never excruciating, but rather just annoyingly painful at the end of the day when I was trying to sleep.  The procedure to correct these ‘hammer-toes’ is to shave off some of their bone and put a pin in that re-aligns the toe.  The pin is then removed after healing a few months later.  It’s is a relatively quick and simple operation, but one that I never considered because it requires weeks of resting the feet – something a frequent traveler like me could never do.  Then this pandemic struck. 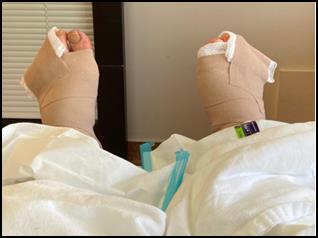 So here I am with my feet-up right after having surgery on both toes this past Tuesday.  Most of the pain goes away in a few days, and then all I have to do is wear surgical shoes for three to four MONTHS.  Still, it’s something I could never have done without this forced break in my lifestyle, so I’m grateful that I could finally get around to it.

I’ve been contemplating having this done since the pandemic hit earlier this year, but as luck would have it, the pre-testing to have the surgery revealed a far-too-long list of other medical issues I needed to deal with first.  I’m very thankful none of them have proved serious, but I have been going to doctors and specialists pretty frequently since June to address all of them.  During the process I learned a few things about today’s medical professionals.

·      Northeast US doctors used to be generally against telehealth / video visits out of fear of being sued.  When COVID19 struck it became apparent that their fear of getting sick and dying was greater than their fear of litigation.  Video with doctors is now readily available.

·      No specialist in my area will see you for a procedure until you’ve had a negative test for COVID19.  I feel like the single most tested person in New Jersey.  On top of that, none of them will accept another physician’s tests.  I have to go to one lab five miles from my house to see one doctor, a different lab in my general practitioner’s group to see one of their surgeons, and still another lab in that same practice to see other specialists there.  One test is a swab deep up your nose – and requires a 48 hour wait.  Another test is a not-so-deep nose swab that yields results in ten minutes.  A third test is a throat culture, with same-day results.  There are clearly no standards yet for these pre-clearance tests, only an adamancy that I have them right before a procedure.  (The test I took Thursday for a Saturday Colonoscopy was not acceptable for the Tuesday toe-surgery.  I had to run back and take another test on Monday.)

·      When I complained about needing another test Monday (when I had just had one on Thursday – explaining that the only people I came in contact with outside of my home between those times was their medical staff) they told me that they don’t routinely test their medical staff.  They only test them when they show symptoms – which goes against all science and is enormously frightening.  Oh boy do we need national standards for testing, PPE and the rest.

I know I’m lucky to have health insurance and to have access to good medical professionals in a state that is not exhibiting a significant COVID19 transmission rate.  Many, many people in the US are not as lucky.  For those of you that are however, I definitely advise you to not skip over your routine medical visits.  You never know what they might catch in an early enough stage to be easily dealt with.  Sometimes, when the symptoms of an issue show-up, it’s already too late to easily address it.

As for me, I’ll definitely be writing more Not-Traveling blogs as the pandemic continues, as my little-piggies need to stay put and heal for a number of weeks (or is that heel?)  Wheeee indeed.