·      Wow – June.  By my count I’ve been sheltering in place for 66 days.  Some areas of the US are now re-opening because they want to – and arguably need to in order to prevent further economic damage – but not because the crisis is over.  Anyone paying attention will realize we are far from over with this.  Sadly, many are not paying attention, and they will likely be victims of the next wave.  Doing something because we want to, but not because we’re ready to, is very dangerous.  Wanting things to be back to normal and having things be normal are two different things.  NASA used to refer to this phenomenon as “Go Fever” in the moon-shot days – and nothing is more dangerous to any mission.  Or, if you prefer another perspective on how this push to open before we have a handle on everything is being referred to on social media, see the image below: 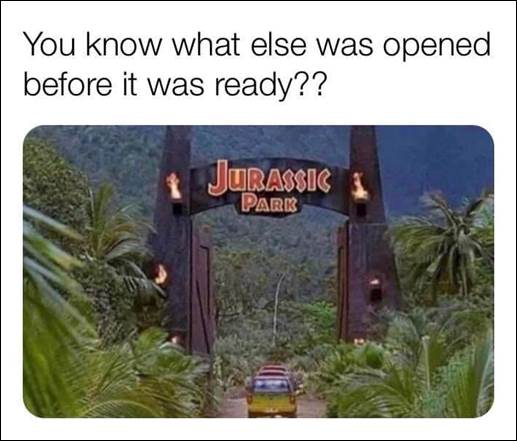 ·      It’s stunning to think that people are seeing the wearing of masks to protect others as some sort of political statement.  I’d ask just how stupid people really are, but that’s a question think I already, sadly, know the answer to.  I’ll just leave it at a request to please wear your damn masks.  And here’s another (NSFW) social media meme for you on the topic:

·      This COVID19 pandemic has upended much of our lives, and when we look back at it, it will clearly have been the inflection point for many major changes in society and culture.   Already we are seeing signs that urban housing is dropping in value and suburban and rural housing is increasing in value.  People are leaving crowded cities for many reasons – out of fear of catching the virus, because people now realize that knowledge workers can truly work remotely from anywhere, because suburban supermarkets are generally less crowded and better stocked, or generally to avoid having to be bunched together in multiple situations.  I predict these changes will outlive the virus.  We can expect to see things like huge office towers become less desirable for businesses and at least partially be converted to housing.  Restaurants and other service businesses will also disperse from crowded cities and move further into the suburbs as well.  All parts of our economy and society that counted upon dense cities and sparse suburbs will likely begin to shift.  Historically, pandemics have always been a catalyst for major cultural changes, and this one will be no exception.

·      Of course, the travel industry will be subject to this major societal and cultural change as well.  While government bailouts have somewhat masked the impact for now, just wait a bit.  Already American Airlines has announced they’re cutting 30% of management staff, and the other airlines will surely follow.  After the 9/11 crisis there was a lull, but then people started flying again when they felt it was safe.  No one paying attention thinks it’s safe to fly yet (much less safe to ride in taxis and/or stay in hotels.)  As I’ve said before, we’re putting Darwin in the driver’s seat.  Before 9/11 I could book a ticket with just my first initial – after 9/11 we needed to use full, legal names.  Before 9/11 I could bring my young kids through security and hang-out in the airline club (where I had a paid membership.)  After 9/11 that was no longer permitted.  Those have become permanent changes.  Expect more of those permanent changes in the travel industry in response to this pandemic – which will also be likely never go back to the way it was before.

·      As long as I’m remembering 9/11, one of the long term winners past that tragedy was Las Vegas.  Americans who were afraid of international travel rushed to this domestic ‘playground’ in numbers never seen prior to 9/11.  I can remember being in Vegas in August before 9/11 – with temperatures soaring into the 110s – and having it be like a ghost town, with hotels giving away rooms at a loss and sparse visitors.  After 9/11 the usually dead Vegas summer disappeared.  Occupancy around the town became heavy almost all year.  Well, in the ‘what goes around comes around’ category, Vegas is going to be one of the hardest hit after the COVID19 pandemic.  Much of what people went there for will have to change.  Large banks of tightly packed slot machines are essentially just germ depositories; card-game tables forced people to sit next to each other and face the dealer; buffet/self-serve restaurants were the loss-leader that drew-in huge numbers of guests and are now history; packed restaurants that were the norm now need to space-people out; and I have no idea how day-pool-parties and nightclubs that were usually packed with people will safely cope.  Without a vaccine or effective treatment, gambling in Vegas will have a whole new meaning – and one with much higher stakes.  Most casinos have announced openings in the first week of June, albeit with “extra steps” like temperature checks, heightened cleaning and mask-wearing.  I wish I could see these as a successful event, but I just can’t.  It’s like roller-skating while holding a tray of powerful explosives.  Sure, if you do absolutely everything right you may get a thrill, but one tiny mistake and you’ll destroy all the people for a couple of city blocks around you.  I just don’t see the gamble as worth the risk.

·      Did you see the news item about Boeing starting-back-up building 737-Max aircraft?  I had to read it three times and blink a few times just to be sure I read it correctly.  Really?  I mean……really?  That’s like reading that that the company who built the damaged electrical boxes used on the Towering Inferno has gone back into production of them.  They’re building questionably designed, poorly managed, un-cleared-for-use aircraft that may never be allowed to fly for an industry that has already has hundreds of aircraft parked in deserts around the world due to lack of demand. Really?  (Sorry – I’m still struggling with this one.)

·      All of the above makes me think we need a new term for people who aren’t paying attention to what’s really happening and risking their and other lives.  I’ve toyed with “Darwins,” the New Jersey based “knuckleheads,” “guinea pigs,” and the simple “idiots,” and none of them seem to fit the bill for the personality of people who have all the scientific evidence in front of them and are too thick to take appropriate precautions either out of a mob mentality or an acceptance of misinformation that things are safe when they clearly are not.  (100,000 Americans don’t die from something ‘less dangerous than the flu.’)  If you have any better suggestions for what we’ll call this first wave of ‘volunteers’ please let me know and I’ll use that going forward.