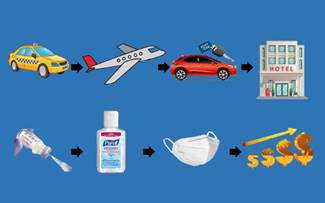 As I mentioned last week, I’m not just dipping my toes into being back on the road, I dove in head-first. This last one was the kind of trip I’d taken hundreds of times before – to a conference for work, bringing my family along, then, after the conference, joining them for a couple of days of leisure.  Yes, I had traveled during the pandemic (and a few times when we stupidly thought it was over) but this was the first week-long, compound-goals trip that I’ve attempted since 2019.  Oh boy, did I learn a few things during the experience.  What I didn’t realize untill last week is that it’s not just us travelers that are not used to the new realities – it’s everyone.

·    The airlines have no idea how to operate in this new reality.  As I mentioned last week I took a 777-300 on a route that would never see such an enormous aircraft before the pandemic.  Airlines are continuously rejiggering their routes, staff and plans.  Business travel is still way down and international travel is also way down.  If you do manage to book a route that works for you, pray that everything goes perfectly.  Irrops were nightmares for the airlines before the pandemic, but they are stunningly even worse now.  An industry colleague told me his flight from Oslo to Orlando was cancelled, and he was re-routed from Oslo to Newark to Washington to Orlando.  He made it to the three day event with only hours to spare, but his luggage didn’t make it until the conference was over.  The commercial airline system simply doesn’t have the capacity to absorb issues now – not even as poorly as it did before.

·    If you haven’t heard, there is a distinct shortage of taxi and ride-share drivers.  It is harder and harder to get a car when you need one.  We booked a Lyft-XL (for four people and luggage) for an early morning ride to the airport.  Lyft always required a big window for scheduled, early rides, but this time it had a 25 minute window for a ride at 6:30am.  It could have arrived at 6:30 or at 6:55 or anywhere in-between.  We had three cars accept then reject the route before the one that finally came to take us to the airport, with the driver complaining the whole way.  My ‘old dad’ rule of getting to the airport two hours before flight needs to change to three hours before the flight until this shakes-out.

·    Many hotels are claiming they’re ‘back’ but they’re really not.  While rooms may be available, many restaurants on properties are not, and many other services are not back either.  For part of this trip we stayed at a Doubletree on the WDW campus (Doubletree Suites by Hilton Orlando - Disney Springs™ Area.)  At this property, the word “valet” on the parking sign has had a white sticker placed over it – it’s simply not being offered anymore.  The housekeeping services are stunningly only available every other day.  (Don’t use your garbage can except on housekeeping days.)  The only restaurant available during the middle of the day is poolside service – as the indoor one is closed.  (In addition to all that, this is the first Doubletree I’ve ever stayed at that I could swear was a Homewood Suites from the layout inside the hotel room.  It was very weird.)  One key sign that hotel properties are unprepared is the random nature of their omissions and mistakes – especially when they go both ways.  For an example, when we checked out of the first resort we were at at 3pm – fully intending to pay for the reserved 4th night because we were well past check-out time – we were never billed for it.  For another example, when we tried to call the property and do the right thing, we learned that Marriott now makes it nearly impossible to call a property.  All calls are routed to a central contact center no matter what number is dialed.  Everyone is scrambling to figure out how to cope in the new reality.

·    Also in this new reality – the one with the politicization of COVID mitigation – the airlines hate you even more than they did before.  They’re even getting Grandma to try to shame you (as you can see from these pre-boarding digital signs for my flight home): 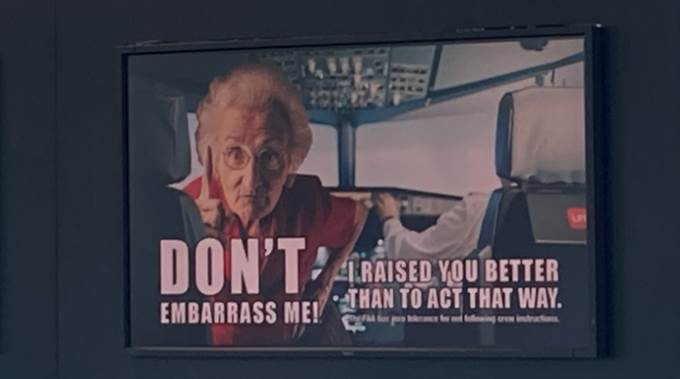 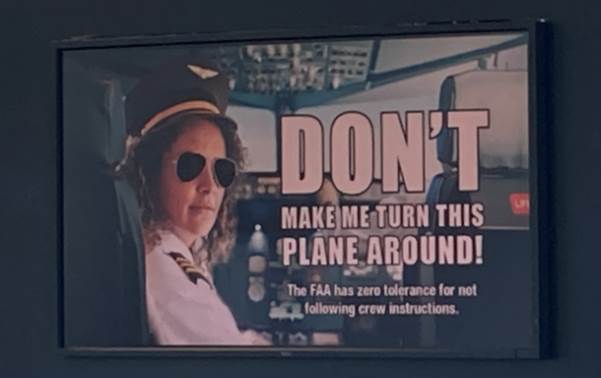 ·    And, as long as I’m on the topic of evil airlines, United definitely doesn’t want to lose its status as one of the leaders of that pack.  Their latest smart-device app update now shows little check-marks on the upgrade screen.  The checks indicate that a person is checked-in for the flight, not that they’ve received the scarce miracle of an upgrade.  At a quick glance however your mind sees upgrade and checks and sub-consciously thinks there have been loads of upgrades (just not you of course.)  Pure evil. 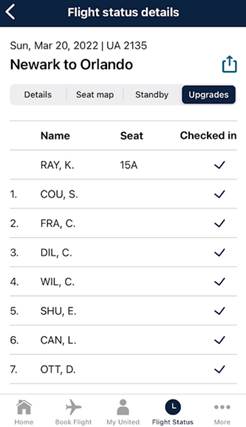 ·    Finally, I’d comment about how unprepared Newark Airport is to get checked-bags back to passengers in anything resembling a timely manner, but that is not a commentary on the new reality.  EWR had hit rock-bottom in that category well before the pandemic.  But, I will point-out that after being covered for construction for months, the few seats around the columns that one can sit on while waiting the hours for bags to come out were actually not removed.  Only the soft carpeting covering them has been removed.  United / PANYNJ figures that if you’re going to sit through the interminable wait for your bags to come out you might as well not be comfortable.  They wouldn’t want you to get the wrong idea that they care about you.

Our new reality is that everything about traveling – just like those seats – is harder and less enjoyable than it was before.  We frequent travelers need to prepare and over-plan for curve-balls even more than we did before.