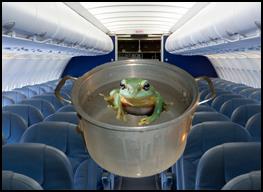 You’ve probably heard the fable about the boiling frog. That’s the one proposes that a frog dropped into a pot of boiling water will jump out, but a frog dropped into tepid water that is slowly boiled will not recognize the gradual change and will be boiled to death.  Well, this week I started to arrange some travel for the first half of this year and suddenly realized we’re all in that proverbial boiling water.  The changes here have been both enormous and gradual.

Some of these changes you probably already know.  For years, travel experts like me had always said ‘join the frequent flyer programs’ and ‘get yourself a club membership.’  That advice has taken a 180 in recent times, as most experts have been suggesting we all get off the merry-go-round of these loyalty schemes that no longer show any loyalty to the passengers.  I won’t even add any hyperlinks to articles here for that advice, because if you haven’t heard it by now you haven’t been paying attention.

There are other changes however that I didn’t quite realize until this past week.  One of my upcoming business trips is to Orlando.  It was never difficult to get an inexpensive fare from EWR to MCO.  Suddenly it is.  The typical $300 fare was nearly double in most cases.  In checking for potential flight times, the best option on that route happened to be outbound on a 777-200 and returning on a 777-300.  Since when are international wide-body jets flying that leisure route?  Well, I suppose the answer is since COVID has all but killed international business travel.  I guess if United can fill those aircraft on that route it’s better for them to keep the birds flying then ground them.

On another future business trip I need to take I’ll be going to my very frequent conference destination of Las Vegas – flying there on a Saturday and flying home on a Tuesday.  I was able to get a decent flight to Vegas, but my options flying home LAS to EWR on Tuesday are ridiculous.  United has a 7am departure (which would require me to be up for packing, returning rental car, getting ready, etc. at 4am.)  They have a 10:26 am flight which is a pretty good time to fly, but which is nearly full already (in April) and has an approximate $800 one way cost.  The next non-stop flights they offer are two red-eyes – at 11pm and midnight.  I was stunned to find out that there were no other options on a route I again have flown dozens of times over the last few years.  My only choices seemed to be spending about a grand for a roundtrip to fly home at a reasonable time, or about $300 for that roundtrip at ridiculous times.  The best choice was neither – I chose to book the return trip with a connection, which brought the times and prices to reasonable ranges.  Even connecting there were much fewer options for flight times.  I suppose I’ve been hearing how schedules have been reduced due to low demand and crews unavailable due to illnesses, but this is the first time I personally have experienced how deep these reductions have cut.  I’m still going to attend this event for the important meetings I have Sunday and Monday, but I can see why – when faced with these lousy choices – others might choose to stay home and just meet over video.

I also realize that if I’m experiencing crazy changes on frequently traveled routes, the people who fly out of smaller airports served by regional affiliates are likely not getting any kind of reasonable service anymore.  There have been a number of articles detailing how “The nation’s major airlines have cut service at their regional affiliates as they seek to stabilize networks depleted by flight crew shortages. As a result, smaller communities across the U.S. have seen the most severe service cuts, leaving many with few options for connecting with the nation’s air transportation system.”

It’s distressing to realize that all of us frogs have been sitting in boiling water without realizing it for a few years now.  Looking at value, convenience, support, comfort and many other factors, the US airline industry is a shadow of what it once was.  I believe, as I’ve said many times before, that it’s time to put back some of the regulations that were removed over the years.  We can no longer trust the handful of firms that run the US aviation routes to do the right thing for anyone other than their investors.  The government is already subsidizing their operations with handouts at every crisis, we might as well get something for our taxpayer money.  Until that happens (if it ever does) be prepared to travel at weird times or with weird connections for excessive prices.  Welcome to our new normal.

My blog last week explaining my health situation and COVID experience resulted in a number of you writing to me.  Most of you sent well wishes – which I sincerely appreciate – but I did receive one email telling me that I was completely wrong, vaccinations are a conspiracy that cause the variants, and other similar fact-free rants.  The only response I’ll make to those comments are in the charts below. 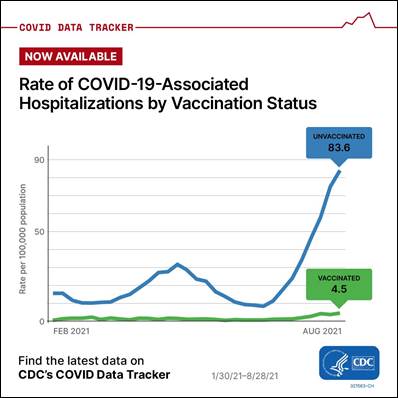 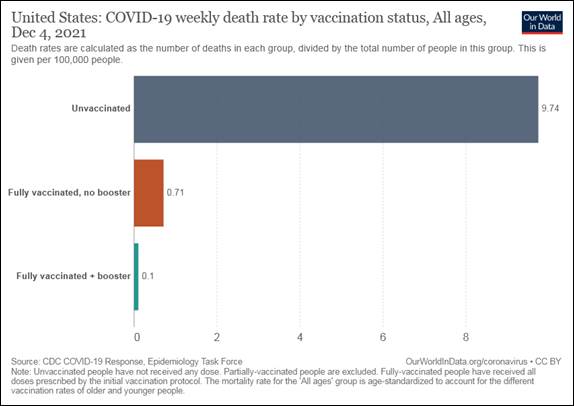 I’m sorry that we live in a world where insane conspiracy theories mean more to some people than simple and obvious facts, but that’s where we are.  If you want the best odds of staying alive get the vaccinations.  And, for the time being, please continue to wear an N95 or KN95 mask.  Do it for yourself, your family, people who have to go to hospitals for unrelated reasons, and everyone else.