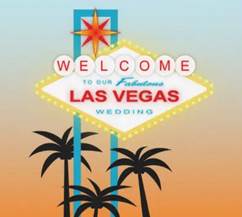 I’ve covered the demise of Las Vegas in a number of past blogs – like here and here.  Still, businesses hold their conferences there, and that means I continue to have to go there – regardless of the demise, or the resurging COVID there.  Here’s a list of some of my most recent experiences on last week’s trip – which show how things continue to spiral downward.

·    Loss leaders are all but gone.  The casinos in Vegas used the pandemic as an excuse to close most of the buffets in town.  There used to be one at almost every property – 54 of them according to this 2019 list.  Now there are a total of 14 of them, and many are only open for breakfast/brunch.  If you want to go out to dinner you had better be prepared to go to a nice restaurant and spend a lot more money.  It’s truly the end of an era.

·    After two plus years of a pandemic, the grace period for the casino loyalty programs is over.  Caesars for example, which used to provide a ‘soft landing’ from their top tiers to the lower ones – never dropping a person more than one tier per year – has reset everyone who didn’t requalify to their lowest level.  For me, that meant that they wanted to charge me to park when it used to be free.  I’m not sure how they think that will encourage people to go there, but the free parking fight is now a lost cause in Las Vegas.  With all the business problems the Caesars properties have been experiencing over the last few years, paid parking is the last straw for me (and I’m sure many others.)  There are better – and better maintained – places to stay.

·    On this most recent trip I stayed at 2 different properties.  For the first one I tried the Venetian / Palazzo for the first time.  It is definitely a beautiful property, but even there they tried to nickel and dime me.  As an invited casino guest with a ‘comped’ room for some of the days I was not required to pay their resort fee.  That sounded great, but when I checked-in, the agent informed me I wouldn’t get in-room internet service unless I paid an additional $20 a day.  That’s not a ‘comp.’  The internet is as necessary as running water nowadays, so it’s like telling me the car is free but if I want an engine I’ll have to buy it separately. 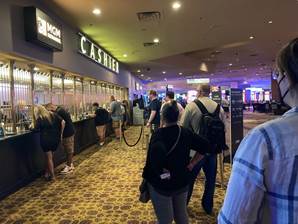 My second stay was back at the MGM properties, where there are still many benefits for loyalty, but regrettably they’ve moved the loyalty services team at most of their properties into the casino-cage.  In order to access this team one now usually has to wait in a long line for the one or two agents handling all the tasks.  To give you a sense of what that means, we had a coupon for a two-for-one breakfast one of the days.  In order to use it we arrived at 9am, waited in line, then finally got to the restaurant at 10am.

·    This trip was for both personal and business.  When my R&R was over and the conference started I got to really experience the LVCCs new West Hall.  Yes, I was there for CES in January this year, but it had just opened and I was waiting for them to finish.  I’m aghast to report it was finished back then.  The facilities are ridiculous.  There is no seating in the lobbies or hallways, so there is nowhere to go for a quick 1-3 person chat other than the VERY overpriced food-court that has maybe ¼ of the seats needed to support the people in the hall.  Then there’s the issue of the bathroom designs.  There are too few of them in the actual exhibit hall, and when you actually get to one you find sinks that look like this: 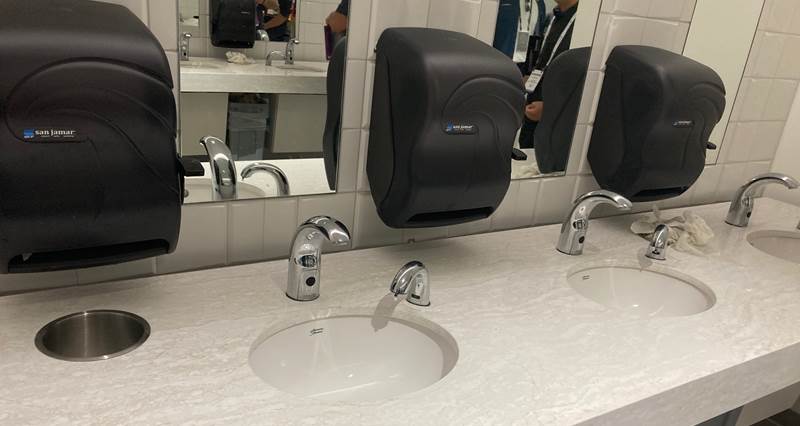 When one tries to push the lever to get a paper towel it immediately hits the wet sink rendering it useless.  Who in their right mind would design something like that?  The Las Vegas Convention and Visitors Authority is pushing conferences into this new west hall, presumably because it is new and less expensive to operate, but that creates a major strain on conferences that need more space than the one hall has.  This conference used the West and North halls – which easily put a 20-30 minute drag on getting to meetings between them.  This even though the North and Central halls were right next to each other.  One either has a loooong walk across a bridge over Paradise Road, or has to take the Teslas that travel the tunnel between West and Central – neither of which are quick, comfortable or easy.

·    On the very last day of the conference, attendees received the following email: 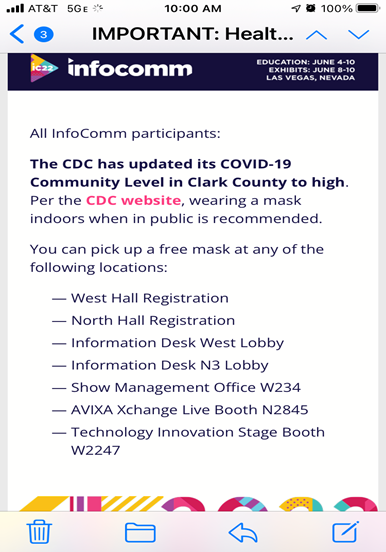 In hindsight, the conference I attended turned-out to be a SuperSpreader event.  Dozens (maybe hundreds) of attendees have reported they came home and tested COVID positive.  (Luckily I was not one of them.)  This created a huge debate on social media amongst attendees – should the conference organizers have done more to prevent the spread?  Should they perhaps do what CES did earlier in the year – requiring masks and providing free tests?  Many people felt that it was “their personal choice” to not wear masks, yet they fail to realize that they are giving no choice to their taxi drivers, fellow airplane passengers, and all of their and those people’s friends and relatives.  Somehow, when faced with minor inconveniences like wearing masks, people seemingly forget how this disease spreads. No one gets sick and intentionally coughs on friends and strangers.  Rather it spreads from people who have been ‘too inconvenienced for too long’ to care to protect the most vulnerable amongst us.  As for Las Vegas, locals are telling me that they are hiding a “big secret” that every conference there right now is a superspreader event, with huge numbers of attendees catching COVID before they leave.  Be warned, in this instance what is going on in Vegas is not staying in Vegas.

·    When it was time to head home, I discovered that the LAS Airport team still has not improved the rental car bus situation.  The central rental car facility was originally created with the promise no one would have to wait more than five minutes for a bus.  Yeah, well forget that. 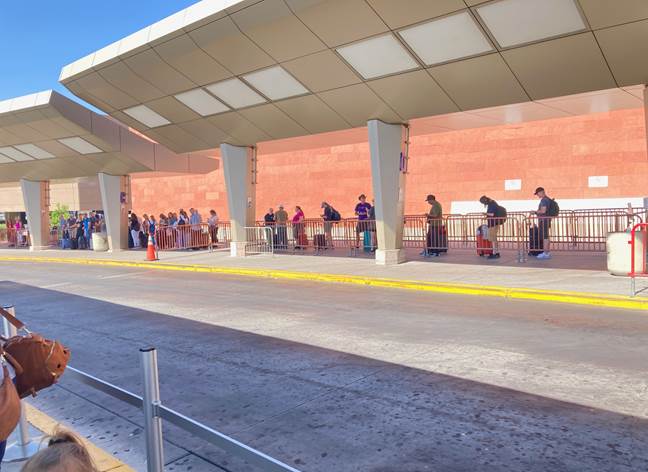 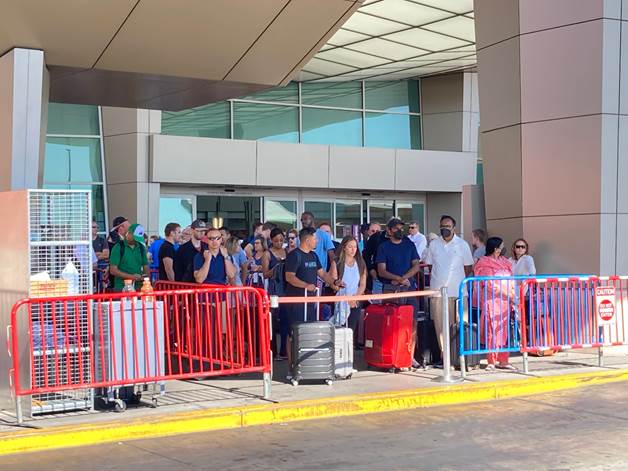 There is now a significant wait for busses both when getting cars and when going to the airport after returning them.  Apparently they are having a hard time getting drivers.  They need to fix that situation by paying them enough to attract more drivers, or give it up and let the rental car firms go back to providing branded services themselves.

One final note – this one about my flight home.  It was my first time in first class on a 737 Max bird on United.  It was terrible.  The seats are a bit wider than coach, but that’s it for the benefits.  United serves inedible food on the LAS-EWR route – so over-spiced that I wouldn’t touch it.  The seat’s tray-tables are nearly impossible to pull out of the armrests and not nearly far enough away for the average sized person.  Then, there were the seatback flight maps: 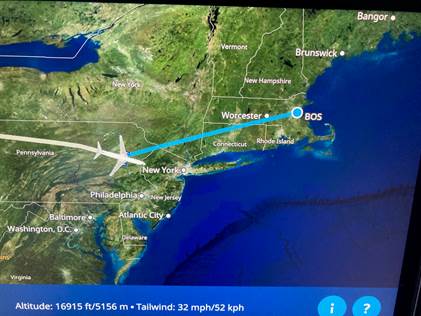 We were clearly flying from LAS and going to EWR, but the airplane’s software was convinced we were departing from DEN and flying to BOS…for the whole flight.  (Apparently it could not be reset until we landed – or the FAs just didn’t want to.)  I think there are still some software bugs on the Max planes and I’ll continue to try to avoid them.