September was an interesting month for me – I was home.  It was honestly the first full month that I haven’t been on a business trip in as long as I could remember.  There were a number of reasons for this.  Firstly, a few of the events I was going to attend were cancelled.  Secondly, I didn’t care.  I’ve come to realize that my lifetime million-miler status on United is the best I’m ever going to do, and I no longer care to play the bait-and-switch loyalty game, so it’s the first September I can remember that I didn’t know and didn’t care about my mileage / spending totals for the year to date.  (It’s so much easier to cynically assume that every email and letter from United and the other airlines is just a lie and ignore them.  I’ve never had as many airline credit card bonus offers as I have since I stopped using them.)  So when I jumped in a car to the airport early in October, it had been such an unusual gap that I had forgotten how bad everything had become.  I was quickly reminded.

Nothing gets one slapped-back into reality as quickly as Newark airport.  Of course my gate was in the C2 wing – as far away from the clubs I’m paying for as possible.  I’ve detailed many times before how galling the current EWR club situation is, but it’s still amazing how oblivious to the optics United is when they invite a paying club member to “reserve and pay for” their super-secret Classified restaurant at EWR – the one they set up as opposed to fixing the club situation I’ve already paid for. 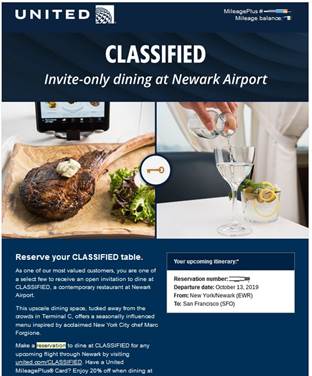 However that was just the icing.  The EWR experience has been made worse by every single change they’ve made there.  The customer friendly moving walkways are gone, replaced in many places with restaurants / bars that create people flow choke-points between you and your gate.  The comfortable seating has been replaced with hard chairs that are bolted to the ground in front of tables, meaning they can’t be moved for larger people, pregnant people, people with luggage, and people just not comfortable being that close to a table.

When you do get on the plane, of course the IFE system is either gone or broken and ignored.  Passenger comfort – especially on the airlines’ “premium service” used to be a priority.  Not anymore.  Now it’s about as low down on the list as it can go.  In SFO, while in-line with about five minutes before boarding, the passengers were told “the personal entertainment system and WiFi is broken, so download some movies now” – which apparently didn’t faze any of the United staff.  It was OK to just say that and move on.  (To their credit, the often useless United Twitter team saw my tweet about it and offered me a travel voucher as compensation.  It was a refreshing surprise, but I couldn’t help but think about the other passengers who didn’t tweet that received nothing.)

Then – as long as I’m already talking about SFO – let’s take a second to discuss how bad things have become there.  The people running this airport seem to put passengers needs dead last on their priority list, totally forgetting that they are managing a public owned facility supposedly in the public interest.  It’s not just that they schedule runway work that disrupts travel for a month; it’s not just that the gates there were renumbered in the middle of the night with no warning; but there is now an ‘optics over substance’ campaign to remove plastic water bottles, ostensibly to help the environment.  I generally support positive environmental conservation, but not in this case.  We already travel with more stuff than will fit in ever shrinking carry-on spaces, so burdening travelers with just another inconvenience is a slap in the face.  The airport already overprices everything for sale, and provides many recycling locations, so they could easily find another way to manage a sound reuse of the plastic collected – yet they don’t.  The glass and metal bottles they’ve put forth as a substitution don’t pack as easily, are heavier, and in some cases dangerous.  But those would be logical reasons to do the right thing.  I suspect doing the right thing wasn’t as important to this airport’s management team as being perceived to be doing the right thing.  Just take a look below at the plastic container of sushi and the plastic iced tea bottle I had for lunch there.  There is no effort being made to eliminate these plastics – with the plastic clamshell being one of the most passenger inconvenient methods of providing food at an airport (because it leaks and is not easily packed for on-board use.)  That would have been a great place to start, as it would have been in-line with passenger convenience.  In addition, as you can see from the photo below, there are still plenty of plastic water bottles for sale – the big ones.  Only the small, convenient to pack ones have been eliminated. 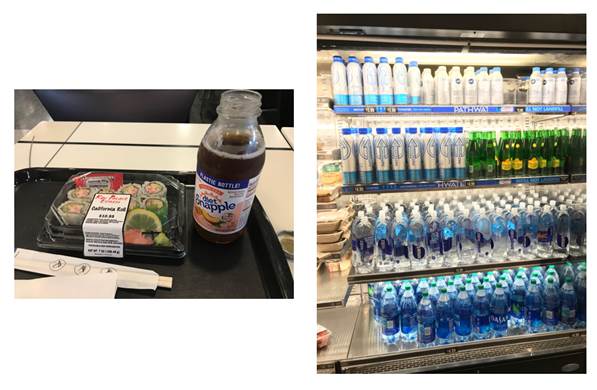 I think we all have to peel the onion on what’s going on here – why only some plastics have been removed – the most convenient ones, as the inconvenient ones haven’t – and what are the sourcing and economic factors behind the new metal bottle supplier.  My gut tells me that if it walks like a plastic duck and quacks like a plastic duck that something other than ‘good for the environment’ is going on.

In the future I’ll have to try very hard not to take any more long gaps between trips, lest my mind allow me to again think that the experience is as special and exciting as it was years ago.  Today, the requirement is to think about how travel used to be, and then just remember it’s far worse than that.