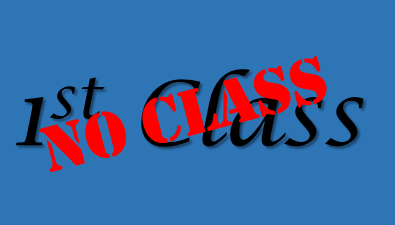 I just flew back home from a business trip to Dallas. This was going to be my last flight for a few months (as I need some surgery in the next few weeks) so I figured it’d be a good idea to pay for an upgrade to first class – as a sort of pre-procedure gift.  Sadly, the experience was only slightly better than coach, a lesson I continue to fail to learn.  The meals were inedible, which is also an unfortunate trend affecting many airport vendors.

As I’ve described before, my status as a United Million Miler only gets me Premier Gold (despite a “lifetime” of being promised ‘one down from the top level’ elite status during the decades of striving to earn that status.)  I’m usually in the twenties or thirties on the list of free upgrades.  In this case I paid an additional $250 for the upgrade about a week before the flight to jump ahead of the list.  (This is something the airline’s frequent flyers called a “tens of dollars” upgrade a few years ago, decrying that the promised free upgrades never happen because of the nickel and dime greed of the management.)

For most travelers, the free-upgrade to domestic United First Class is just an unachievable promise of an experience that sucks a bit less.  Very few upgrades are actually given out.  These cabins, that typically hold twelve or eighteen people, sometimes have a handful of open seats not-purchased for the thirty or so people on the upgrade list.  With so few people actually receiving the upgrades, most are not aware of how little improvement it actually represents.

On the plus side – the seat is bigger than a coach seat. Bigger people do not feel squeezed.  There is also no middle-seat, so the idea of being trapped goes away.  First class also has its own lavatory, so on the aircraft without mid-cabin lavs, first class passengers don’t have to walk to the back of the plane.  And then there’s the booze.  If you’re a drinker (which I am not) you can revel in all the free beer, wine and liquor that you like.  This is a very valuable benefit for some, but sadly not for me.

Then there is what we all lost.  My favorite part of first class was always the hot-towel service.  Nothing was more refreshing before a flight and/or before landing than the hot-towel on the face experience.  That’s of course gone since COVID.  Then, while the seats are definitely bigger, the arm-rest-stored tray-tables are usually not.  It is almost always uncomfortable for the average sized person to use one of these trays, and I’m a bit larger than average.  On some aircraft one can recline a bit to open up some room at the waist, but on other aircraft it has no effect.

One of the biggest benefits of domestic first class however used to be the meal service.  If one was going to be in an aircraft for three to five hours, an advance upgrade would mean a person wouldn’t need to scramble to bring a meal from home or buy one at the airport.  Today on United that benefit is all but gone for most people.  The only two meals choices offered since domestic first class hot meal service was restored post-COVID are completely inedible.

One dish is a chopped chicken swimming in ‘revolting sauce.’  Whether that particular week it’s tandoori or black-bean salsa, chile and chimichurri it doesn’t matter.  They slather the chopped chicken in so many spices that all but the most iron pallets and stomach would barf.  The other ‘choice’ is Impossible Meatballs also swimming in a sauce that would melt steel.  I have nothing against vegetarian meals, but I personally find fake meat (or fake fish) terrible.  I would thoroughly enjoy a no-meat meal like pasta or a sautéed bok-choy, but lab grown stuff shaped like something it isn’t couldn’t be more unappealing to me (and the entire plant-based meat business is crashing for just that reason.)  And, even if I chose to try to eat the meatballs, the sauce they are swimming in would make it impossible.

As you can see from the comment above, I’m not the only person with this opinion.  You’d be hard-pressed to find anyone who would order these horrible choices from any restaurant’s menu.  Honestly, you’d be even more hard pressed to find a restaurant here in the US that had these things as prepared on the menu.

The mission of an in-flight meal is to replace the lost opportunity to eat normally because one is in the air at the time.  It isn’t to try to impress people with some wacky, complex meal that one out of a hundred may appreciate while the other ninety-nine vomit at the thought.  ANY hot meal can be made in such a way so that the main portion (the chicken or the meatball or the turkey) be relatively plain, and the hydrochloric acid sauce with fuchsia beans and poop-pebbles be kept on the side for those that want to experiment with it.  But once you chop-up the protein and mix it with the larks-vomit it becomes revolting and impossible to pick out.

Now I don’t believe that United has stupid people running it. Greedy and perhaps without a conscience – sure, but not stupid.  So one has to ask why these are the choices available (given no one planning them would ever order these in a restaurant.)  The Impossible Meatballs have to be something contractual where someone paid a lot of money for placement.  I suppose what they’re cooked in is likely there to prevent as many people from trying them as possible.  The chopped chicken in tabasco and raw sewage, well that’s got to be intentionally prepared to prevent people from wanting to eat it.  The only reason I can think of for these choices is to tacitly coax first-class passengers into refusing the meal so that the airline can prepare and load fewer meals (probably because some junior MBA bean counter has determined that one less meal loaded per flight saves .000037 cents per day.)

This meal bean counting trend is also becoming pervasive at many of the airports I visit.  Restaurant offerings are getting spicier, and pre-packaged meals (which used to have a packet of mayo, ketchup or mustard either packaged with it or available from the vendor) now have the various sauces already slathered on the item.  It’s likely far cheaper to wipe enough of a dollop of goo on the sandwich to drip onto your clothes at every bite then it is to provide discrete, packaged condiments.  Beyond the mess this causes, it presumes that the person purchasing the pre-packaged meal can tolerate the taste of the grease that is splashed on them.

More and more, the only safe choice is to prepare a sandwich or other food at home and bring it with you – which of course uses-up precious space in your already stuffed carry-on, and also needs to make it safely through the TSA screeners.  In fact, that idea could inspire a new sales slogan for Oscar Meyer.  “Flying first class?  Be sure to pack some Oscar Meyer meats so you aren’t hungry or barfing all the way.”