It is always a joy to be able to go to Hawaii.  There is so much beauty and happiness there that any visit always becomes a very special memory.  As I briefly mentioned in an earlier blog, my wife and I mixed a little kismet with a desire to celebrate one of her milestone birthdays and came up with a six night stay on Maui.  It was a wonderful getaway with special memories, and great experiences, but it also had a few disappointments and obstacles along the way.  Here is part one of a two part report, specifically about our resort.

We’ve stayed at Hilton properties in Hawaii many times before – at the Hilton Hawaiian Village in Honolulu and the Hilton Waikoloa Village on The Big Island.  Both are expansive, gorgeously beautiful properties with many unique qualities.  Both properties have treated us spectacularly as Hilton Honors Diamond members, with many upgrades to beautiful rooms and other perks.  When the Grand Wailea became a Hilton property in 2006 we heard about how beautiful and exclusive it was, but it took until now for us to visit what is now called the Grand Wailea, a Waldorf Astoria Resort.

Driving up to their porte cochere – just past a waterfall – was of course spectacular, as was the open air lobby of the property – full of decorative pools, flowers and statues.  It was clearly designed with breathtaking beauty in mind.  It is also one of the few properties we’ve visited in Hawaii that actually places flower leis on the ladies and kukui nut leis on the men as they enter. 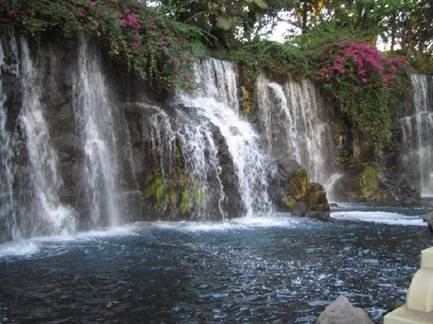 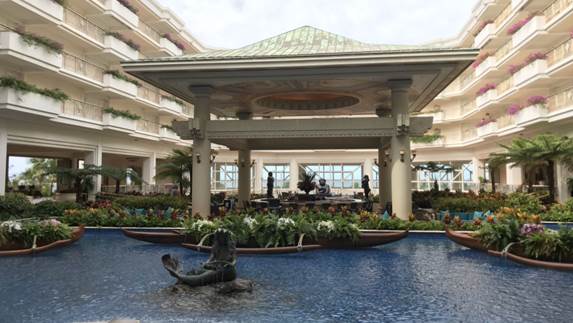 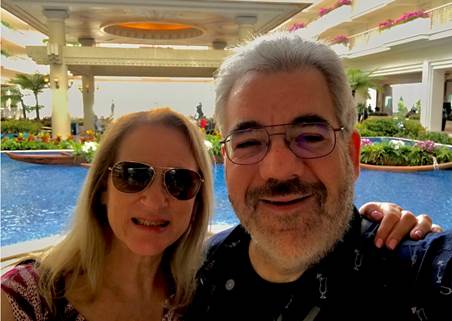 Our experience entering and registering was unfortunately less than grand, as the bellman gave us a hard time.  We explained that we had some medicine with us and wanted to take our own bags up (or at least not be separated from them and have to wait for them to be delivered) and he promised us that the bags would accompany us through check-in and up to our room.  As we checked in, the desk clerk immediately told us that would NOT happen, and we’d have to wait for our bags as they were “busy” at the moment. (We’ll get back to that theme again later.)  She told us we could instead just take the bags from the area where the bellmen left them and bring them up ourselves – which we did (which was actually a whole additional problem as we could have taken anyone’s bags and weren’t stopped or questioned.)

We received a “deluxe ocean view” room as a diamond upgrade, which was a schlep-and-a-half to get to from the lobby (elevator to the 9th floor, and around three, long exterior corridors to the other side of the building.)  When we got to the room, the first thing we saw after opening the door was that the room’s refrigerator had caused a flood on the floor – that we had to get towels from the bathroom to absorb.  This was most definitely not the beginning experience I had expected from such a resort, and called to speak to a manager on duty.  That person (Carla) explained that our experience was not typical, that she’d follow-up with the bellman who lied, she’d have the fridge fixed, have replacement towels sent, and would add XX,XXX Hilton Honors points to my account as an apology.  I couldn’t ask for more than that.  Later that day we came back to the room and found a huge food and wine tower left on the countertop (with fruit, cookies, chocolate, crackers, snacks and a bottle of wine on ice) with a note wishing my wife a happy birthday.  That was an unexpected and very nice touch – but I’m not sure if they’d have done it anyway or if it was just done because of the less than stellar check-in.

Our room was ‘interesting.’  The view was in fact nothing short of spectacular, with sliding glass doors to a lanai that let us look out at the pools, the beach and the island of Kaho‘olawe with Molokini in front of it.  We could also peek-out and see Lana’i off to the right.  We’d have had a direct view of the sunset if we had ever managed to stay in the room at that time, but as we were always out somewhere at dinner at that time in the evening the only photo I have from the room with sky colors is what the clouds looked like at sunrise. 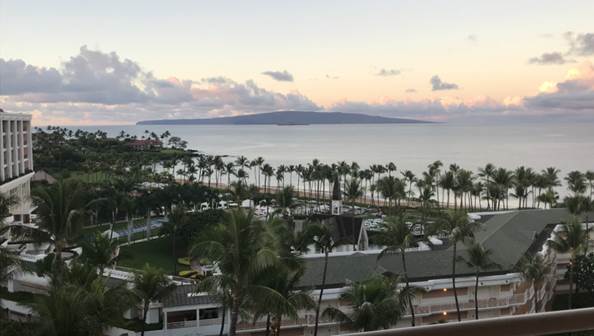 The room itself, and indeed the whole property, is very dated.  The air conditioner could barely get the room cool enough to sleep, the floors and carpeting are years past their prime, and the huge bathroom has 1970s fixtures and a single sink on a huge vanity where two could easily fit.  We were staying at a discount (one night on an American Express free night certificate, and the next four on a mixed “points and dollars” award) so we didn’t mind – but if we had paid the price they advertised the room at ($600 - $900 per night – for just that deluxe ocean view – suites and other upgrades cost even more) we’d have been mighty disappointed.  Yes, it’s all about location, but at those prices I’d expect a “Waldorf Astoria Resort” resort to do much, much better.

Across the board, the property was a mixed bag of both ‘great’ and ‘neglect.’  It is a paradise for families, offering countless pools and access to the public beach.  The pools include waterfalls, a water elevator, hot tubs, fountains, slides, a lazy river, etc.  (The circles on the map below were how the desk clerk showed us where we needed to go for various spots.  Like any resort it is big enough to be confusing until you know your way around.) 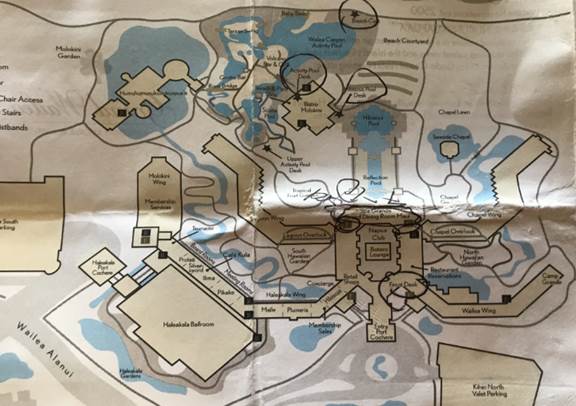 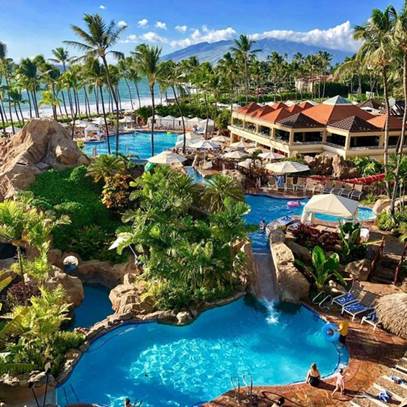 The pools are spectacular but not as well maintained as I would have liked.  For example, some of the pools have the steps to get out notched into the side walls instead of being real stairs or ladders – and they have edges sharp enough to have sliced open my big toe one time.  (Can you imagine how traumatic it would be for a child to walk out of the pool with a bloody toe?)

The restaurants on property serve OK if unspectacular food, which is made-up for by the absolutely spectacular views. 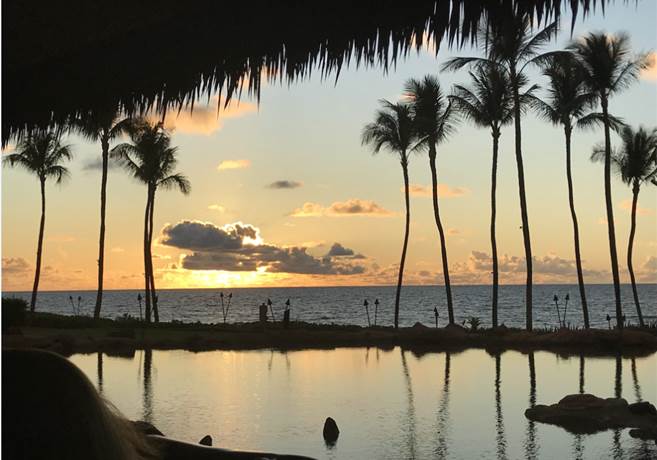 What we found interesting was that other than the tropical mixed drinks, there wasn’t much offered in the way of Hawaiian fare.  In fact, there wasn’t as much Hawaiian ambiance at the entire property as we would have expected.  The Hilton Hawaiian Village always offered Hawaiian musicians performing somewhere on property (which are honesty some of our best memories staying there) and the Waikoloa Village had Hawaiian musicians and dancers floating around the property on rafts.  Here at the Grand Wailea, there was Hawaiian music piped at a low level through the PA speakers and available on the in-room TVs, but the only musicians were at the lobby bar, and they were (not very good) lounge singers, with not a speck of Hawaiian influence.  In addition, if you sat in the correct selection of chairs in the open-air lobby, you would be treated to the dissonance of the Hawaiian music on the speakers blending with the lounge singer’s latest rendition of You’ve Got A Friend.

And then there was that “busy” thing I mentioned.  It was early November, and the property was hardly full.  However, everyone seemed overwhelmed.  It wasn’t just the bellmen.  For example, there was always a wait at the restaurants despite open tables.  In addition, we received three in-room messages during our stay from the valet, stating that they were “too busy to accept call ahead requests” to retrieve one’s car.  At a “Waldorf” property that charges $40 per day to use the valet – and offers no other option like self-parking – being “too busy” to get a car is hardly acceptable.  One evening when we were leaving the HumuHumu restaurant and heading to the lobby to get our car – which is easily a ten minute walk – we asked the restaurant to call the valet to bring out our car, and when they did the valet refused, saying we can just ask for it when we get there.  At $600-$900 per night PLUS $40 a day for the valet I expect the property to simply hire enough people to do the needed work, not make guests wait.

We didn’t let the state of the property get in the way of enjoying our trip (which I’ll cover in more detail next week) but had we paid full price we wouldn’t have been so forgiving.  I guess that’s the bottom line here.  Unless this property ups it game in a significant manner, it’s OK for reward stays but save your cash.