I took my first ever airplane flight – from New York to Montreal – when I was eighteen (around 1980.)  In the nearly four decades of traveling since then, and despite the late start, I’ve experienced a lot of travel “firsts.”  It’s a long list that includes many things that will likely be familiar to most travelers, and a handful of them that are pretty rare:  my first trip that required a passport, and my first trips to Hawaii, Asia, Europe, etc.; my first international first-class upgrade; my first cancellation and being stranded away from my home country; my first aborted landing / go-around; the first time I was delayed because airline mechanics had to duct-tape a bin closed; the first (and only) time I scored a complimentary double-upgrades for three people (myself and my two young sons after an unplanned reroute) etc.  One would think that after this much time as a business traveler there weren’t too many things left that I hadn’t already experienced.  Well folks, let me tell you the story of this past Saturday – the first time in my traveling life that an airline supervisor threatened me with cancelling my itinerary if I dared tell anyone about how I was downgraded.

Here’s the background story.  Right now, as I write this, I’m in the middle of a combination business and pleasure trip.  I knew for months that I had to fly from my home to the Bay Area for work this week – for a big industry conference for which I was the program chair.  My wife, as it happened, also just celebrated a milestone birthday.  We had been chatting – also for months – about taking a special trip to celebrate later in November.  As I started to look around for what we’d enjoy doing,  a special sale, a rare hotel points redemption and some other factors created karma around combining these two trips.  I’d fly one way to SFO, my wife would meet me later in the week, and we’d travel together from then on.  I booked a United Premium Service flight – in Economy Plus – on a 777 that flies the route – an am departure from EWR – early, but reasonable.  I booked the only United coach seat I’d ever fly in – Economy Plus Aisle – for a whopping $2xx one way fare.

I book E+ because, as a taller gentleman, my legs can fit in front of me, and I book the aisle because, as a larger gentleman, I can use the aisle space to maneuver a bit.  I am a United Million Miler, so lifetime E+ access for no extra charge is one of the few benefits United has not yet gutted.  However, just because I didn’t have to pay extra for it, doesn’t mean that service doesn’t cost more – it does.  In addition to the slight addition in comfort, these seats on this route have meal service and snack service – and United certainly upcharges for the privilege of receiving this (what used to be standard but is now rare) airline treatment.  My 21C E+ Aisle – that I selected this flight to sit in – was showing as my seat for months – right-up until check-in time, when suddenly and with no notice I was in the back of the plane with no E+.  Apparently there was an equipment change, which meant taking away the E+ seat they sold me and that I bought and paid for, and instead adding more First Class seats that they could sell for more money than what they had already sold to me.  United’s algorithm probably automatically looked for the cheapest paid seats to be bumped down out of E+ and I lost that particular lottery.

I did what any 40 year experienced business traveler would do in that same situation.  I called the airline and politely asked what happened (‘we don’t know, probably an equipment swap’) and how do we fix it by finding me the E+ Aisle seat I paid for.  I knew I was going to get the ‘oh sir, we reserve the right to change your seat and treat you like dog-poo on the bottom of our shoes whenever we feel like it’ speech, but in this case it’s still a good argument worth making.  United downgraded my seat and service due to no fault of mine and they have a moral obligation (yes, FYI, I managed to type that without laughing) to move me to an equal or better seat.

Agent: “But there are no more seats in E+ on this flight”

Me: “Yes, but I’d have to wake up at 2am to make that flight, I’d have to leave a wedding early, and it’d be a killer day once I arrive.  Can you upgrade me to 1st?”

Agent: “Sorry sir, our Premium Service flights are not eligible for complimentary upgrades.” (Which of course I knew.)

Me: “I understand that, but in this case I don’t see that you have any other option to remedy the problem you caused.  I want and deserve a seat that is equal to or better than the one I purchased.”

Agent: “I see your point.  I can’t do that but I’ll reach out to a supervisor and see if we can get permission.”

Now it’s important to note that I’ve been friendly and cheerful to the agent for the whole call, making it clear all along that this wasn’t her fault and I’m not angry at her.  I just want the situation fixed.  I feel, again having the moral high-ground here, that I have a shot at an upgrade – especially considering that the usually lousy United has been bragging about making an effort to return to a customer service approach. (No, FYI, I was not able to keep a straight face as I typed that one.)

Five minutes later the agent comes back on the line and apologizes for making me hold for so long, she’s trying to get a supervisor.  Again, this is clearly a very nice person and I appreciate that and say so.  Five more minutes later I am greeted by a supervisor to whom I re-explain the story.  This gentleman … well, rather than saying he was desperately in need of surgery to have whatever insect he had up his rear-end removed, let me just say he wasn’t nearly as nice as the first person I was speaking with.  He was belligerent, mean, condescending and rude – almost from the get-go – like how dare I bother him with my petty question about wanting more gruel.  He said there is absolutely nothing he can or will do to correct the mistake unless I give him the money for an upgrade to first (without even acknowledging the downgrade that took place.)  Again, let me point out that I was never rude or angry, just surprised that I couldn’t get him to see the perspective that a wrong out of my control needed to be corrected.  I then asked him what people will think of United’s new Customer Service approach when I tell them what happened to me in this case.  At that point you’d have thought I dropped a bomb on his family’s village. “So now you’re threatening me” he asks?  He follows that with “What if I just canceled out your itinerary and issued a refund?”  Frankly, I was stunned.  How dare I threaten him?  I just said I’d be willing to tell others about my experience with the downgrade and he takes it as if I have no right to tell friends or post a trip report or make a tweet or reveal in any way that United was taking away the service I bought and paid for...and then, while continuing to bark anger at me for threatening him, he proceeds to begin cancelling the ticket.  (That’s all I needed before my business / celebration trip – a small man with small sense of big power trying to unjustly wield the only hammer he thinks he has on what he thinks is a handy nail.)  As politely as I could, I talked him down off the ledge, apologized for the misunderstanding, and wished he’d have a good rest of the day.  I hung-up and called United again, reached another agent, and had them change me to the 6am flight.

So, the bottom line here is that in my many years of traveling, I’ve been upgraded and downgraded, I’ve been stranded at Heathrow, and I’ve been luxuriously transported around the world.  I’ve been helped countless times by countless numbers of good people, and have been hurt countless times by countless numbers of thoughtlessly cruel people.  However, in all that time, I’ve never before been told “that’s a nice itinerary you got there…it’d be a shame if something happened to it because you told people what we did here.”  That’s got to be over the line.  That’s the reason – more than any – that I’m writing this blog and will be forwarding the issue to the various regulatory bodies covering the airline and the airport involved.  That’s got to be a place where we draw the line.  I don’t personally know the supervisor I spoke with who threatened me, but he’s definitely in the wrong job.  I don’t want a refund of my ~300 bucks and I don’t want an apology.  I want to make sure that guy never again speaks with a person that might not have a forum like mine, and never again tries to threaten a customer for no reason other than politely asking for help and support and suggesting that United’s own actions would be made public.

The call took place Saturday morning, roughly 9:10am EDT on October 26th, 2019.  I know there have been a lot of good people at United over the years who’ve read my blogs and written to me about them.  Let’s do what we have to do to make sure this never again happens to anyone else.

Addendum:  The Social Media Team at United (which is apparently an actual 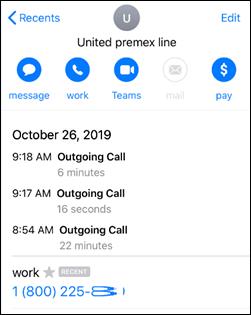 thing now – as they’ve been more proactive in the last month or two – in a positive way – than I’d ever seen before) apparently escalated my experience to their corporate offices, and I received a very nice call from one of their people following-up.  After a discussion and an exchange of emails, he reported to me that they can find no record of any call from my phone.  Even after I sent them the screen capture of the call record seen here.  Even after the flight was obviously changed by the second agent as I requested.  They must have done that via telepathy, as United no longer has any record of me calling their agents.  I wonder how that can happen…