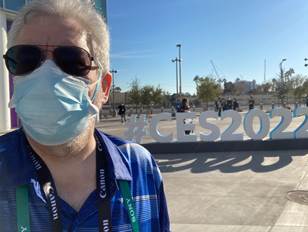 The start of any new year brings us the annual technology conference known as CES.  (It used to stand for the Consumer Electronics Show but the group that puts it on does not want that limiting name used anymore.)  The show was all virtual last year, but took place in person this week.  But, like everything right now, it was nothing like normal.  This blog is part one of two detailing my experience traveling to and attending the conference.  As in all years, I don’t spend time covering the big vendor announcements – you can look at the general tech media firms for that – although we’ve now learned that these firms are much more like PR hacks then journalists.

Just as the event organizers were preparing the halls to host the attendees, the COVID Omicron variant exploded.  What happened afterward was interesting.  Many of the technology media firms in the US that cover the show broke one of the biggest rules of journalism and made themselves the story, announcing en-masse they were not going to attend the show.  I have nothing but respect for any individuals that chose not to go for fear of their safety, but when entire news media companies announce simultaneously that they are “not attending” and “going to cover it remotely” what they’re telling you is they are actually the furthest thing from what a journalist is supposed to be.  They chose to take the private PR announcements from the big brands, combine that with whatever they could view remotely, and then claimed that was “coverage.”  It wasn’t – it’s public relations.  Journalists have covered battlefields in wartime, they covered the Olympics during COVID, and they easily could have found one or two reporters willing to wear a mask and cover this event.  Their boycott – and subsequent on-line trashing of the event they didn’t actually attend – tells you much more about them then the event.  Around a dozen big name exhibitors also pulled out of the show at the last minute – generally firms that have substantial Risk Management departments that were fearful of any COVID ramifications.

I made my decision to attend early and did not change my mind.  This event was in Las Vegas, Nevada – a state with a strict mask mandate (as opposed to Florida – a state with a governor that has flaunted COVID mitigation.)  I chose to wear N95 masks all the time, and never ate indoors at events or in restaurants.  (I had one nice outdoor meal with some industry colleagues, but the rest of my meals were in my hotel room.)  Yes, that made it a less enjoyable week, but I don’t go to CES to enjoy myself, I go to cover the events and learn the trends.  Any journalist could have safely made the same decision.  Again, the fact that they didn’t says more about their organizations than the event.

However, before I jump too far ahead, I need to talk about my travel there.  CES is one of the events where the airlines gouge the heck out of attendees.  A typical $400 EWR-LAS round trip airfare goes for around $1,300 and up.  The best I could do for about $900 was to fly there a day early (New Year’s Day) as the extra hotel day was cheaper, then connect through LAX for the flight home.  Well, as the tech media companies announced their boycott, suddenly a lot of seats opened-up on cross country flights.  I actually scored the impossible free First-Class upgrade as a lowly United Gold (the status I have as a Million Miller 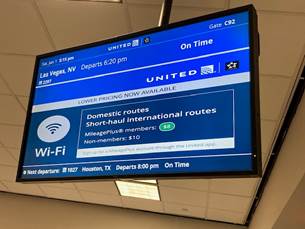 when United screwed us out of the promised lifetime Platinum years ago.)  It was a 1/3 empty flight there, thus the upgrade.  I was also able to switch to a non-stop flight back Friday, and then changed it to Thursday to avoid some weather at home – and got about a $100 credit back to boot.  The flights were uneventful and I even learned that United has reduced the cost of in-flight WiFi to $8 per flight for Mileage Plus members (and on top of that the service now offers free messaging through their app.)

The “Media Days” events – explicitly for the working press – were very lightly attended.  I would guess they were 25% of typical CES attendees.  Essentially, the US media were no-shows, but the international media were there in full force (along with a few US folks like me that are not part of the tech media organizations.)  When the expo officially opened for everyone however, I’d say it was about 65-70% of regular attendance – hardly the “Ghost Town” that some of the big tech media firms reported (even though they were not there to witness it and had no investigated basis for that claim.)  There were a few gaps on the expo floor where some exhibitors pulled out, but the number of exhibiting firms actually rose from 1,700 to about 2,200 in the weeks up to the event.  It was clearly a ‘different’ kind of CES – one without the huge crowds – but it was well worth the time there for me.

Next week I’ll have Part 2 of my CES report for you, including some of the technology themes and links to some cool products I found.

I would caution you to take every single article on CES from the big tech media groups with a grain of salt.  They generally were not there, so we have no idea what press release (or even possibly graft) they used to prioritize or source their stories.  Here is a link to a twitter list of people I know who actually attended if that is of interest to you.  (Of course they may be tweeting about other things too, but at least they were actually there.)

One such example of a questionable article topic is “Metaverse” – one of this year’s hottest buzzwords.  From what I saw, none of the articles are honestly reporting that it’s clearly a meaningless, catch-all phrase that PR agencies and exhibitors are trying to use to promote whatever they already do.  There is no Metaverse – it will not be a ‘third-life’ (so you can safely keep your Second Life avatars fully retired.)  It is an overhyped expression that does truthfully indicate how our lives, our technology and the internet will be merging in new and different ways over the next few years.  For now IMHO, it’s perfectly OK for you to ignore or discount any mention of that phrase.

So, because I only just made it home, I’ll continue to put my thoughts together and edit my wrap-up video in time for next week.

For now, I’ll leave you with this interesting video log of what it’s like to ride in Teslas in the new Boring Company tunnels between the Las Vegas Convention Center Central Hall and the new West Hall.  Click the photo to watch the four and a half minute YouTube video.