The Multiverse Of Madness – August 2022 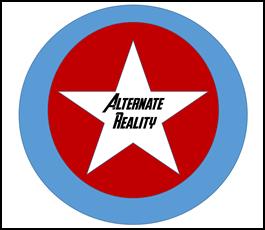 No, not that one with the superheroes. But being back on the road this past week I’ve come to the conclusion that we are in some sort of Marvel-esque alternate reality from the one we left pre-pandemic.

This story actually starts a few weeks ago when my wife and I were flying away for a leisure weekend.  “Why are we struggling with these tiny, four-wheel, duffel style roll-aboards” she asked me when we were in line to board a flight.  “Because the airline agents are evil and will stop at nothing to make us fit our bags into the luggage sizer and force us to check them” I replied.  “No….no they aren’t doing that” she said.  “Just take a look at the bags everyone else was bringing on-board.”

You know what?  She was right.  I had switched us to these smaller, soft, frameless bags because a few years ago the gate agents at Newark were taking pleasure in evilly forcing passengers to make their bags fit in the cruel, metal bag sizers (regardless if the bag actually fit in the overhead bin.)  However, lately I can’t even remember the last time I saw them unnecessarily hassle an unsuspecting passenger about a rollaboard that may be an inch too wide one way or another…and a quick glance around at the people that were waiting to board showed dozens of bags far bigger than the ones we were using that day.

So the following week we went out and bought two new 21”-ish soft-sided but fully framed expandable bags with loads of roomy side and front pockets, and guess what – no one cared that I brought it on-board for this past week’s trip.  It was almost as if the gate agents had an actual life and had no desire to make the travelers miserable for no reason.  Now this has to be an alternate reality, right?  I mean nothing changed…it’s the same planes, the same airline management, the same fees to check a bag…all the same, and yet they don’t have any desire to hassle people.  (I had to double-check I was still flying out of EWR just to be sure that wasn’t the issue.)

After I boarded (and fit my now bigger bag easily in the overhead bin of course) I tried to put the issue out of my mind and just relax with my iPad and disk of movies and TV shows to watch.  I finally binged all of Marvel’s Moon Night – yet still don’t understand it.  Watching that weirdness, I didn’t think about my own, personal alternate reality theory again until I arrived at my hotel.  I was staying this time around at a Hampton Inn.  I joked with my taxi driver that they’re essentially all the same (with very few exceptions) so from the inside I could be in any city in the US.  I checked-in, got to my room, started to organize my things, took note of where the hair dryer was, and where the note was on the bathroom mirror that said there was no housekeeping…..wait, what? 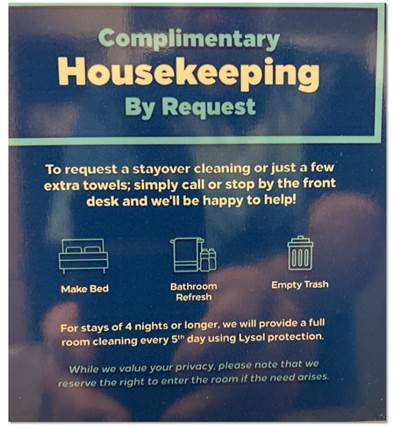 The sticker that up until recently said things like ‘if you need a comb or toothbrush just let us know’ now said that housekeeping services are only “By Request.”  Apparently, the daily service to even just make the bed, change the towels and/or empty the garbage cans was now gone.  If I wanted to “request a stayover cleaning” I apparently could call and ask for one.  A “Stayover Cleaning?” (Read that in the Pythonesque voice of John Cleese as he says “Pining for the fields?” in the dead parrot sketch.)   Since when did that even become a thing?  We used to call that basic housekeeping services in 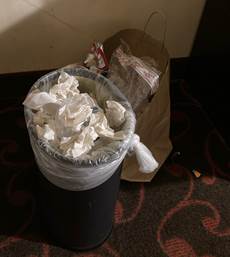 my reality – again making me believe this is some multiverse of madness.  In this one apparently you can have in-room garbage cans sitting full for four days before they need to be emptied.  No wonder they say they use Lysol on the fifth day – can you imagine the stench of five day old garbage?

In light of all this I’m still not sure if I’m in the universe that I was in before, or some sort of strange and different one where everything is the wrong color, words mean different things, EWR gate agents are no longer surly and garbage doesn’t smell.  I hope you folks – my dear readers – will drop me an email and let me know if I’m in the correct universe or if somehow that last COVID booster worked like Geordi’s visor did to Lieutenant Worf and knocked me into some weird place where he’s married to Deanna Troi.

In all seriousness (and getting over my giddiness for working-in Marvel, Monty Python and Star Trek references to the same blog) I don’t understand a world where United people are nice to you and Hilton wants you to have garbage in your room.  That’s 180 degrees away from everything I’ve experienced my entire traveling life, where Hilton generally bends over backwards to make you feel welcome and United hates your guts for being a burden to them as they try to fly their planes.  If anyone has an explanation for that (or for Moon Knight while I’m asking) I’m all (Spock) ears.