The No Good, Very Bad Attempt To Upgrade An AT&T Phone 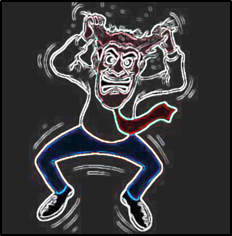 Every once in a while us bloggers run into a first-world horror story so bad that we need to warn others.  This is one of those stories – which should be fair warning to you that I’m going to describe in intimate (and sadly very long) detail what I went through to upgrade a phone, specifically so that you won’t make the same mistakes.  The crime: AT&T stealing hours/days from my life.

Let me begin by explaining that I started my career at AT&T – in their Corporate Television group at 195 Broadway in New York (the building that had Golden Boy on the roof and the firm that created and ran the Bell System until the terrible Divestiture decision broke them up the 1980s.)  I have been a generally satisfied customer of the company (or at least their descendant firms) going back over 25 years.  I’ve held an AT&T account for myself and my family for all that time.  Sadly, as with the travel industry, it looks like this is another case where my loyalty has been misplaced.

On Monday evening Feb 28th at about 9pm, one of my sons came into my bedroom in a panic and said his phone stopped working.  It would get text messages and data just fine, but it no longer could make or receive voice calls.  AT&T was in the process of killing their 3G network, but my son’s phone was cleared to work just fine on the remaining services, so that probably wasn’t the issue.  After a two hour troubleshooting call with an AT&T tech agent, we essentially gave up.  Neither she (the AT&T technician) nor I (the engineer) could figure out why it wasn’t working.  We temporarily transferred his wireless number to a spare phone I had lying around and I told my son we’d get him a new phone.  He should research what he wants and we’d get the process going at a reasonable hour – not 11pm on a workday.

The next day (Tuesday) my son explained that he wanted the new Galaxy S22 Ultra phone.  That’s not a choice I would have made, but it’s his phone, so I had no issues with his choice.  I went to my AT&T account management page online and was happy to see the following offer: 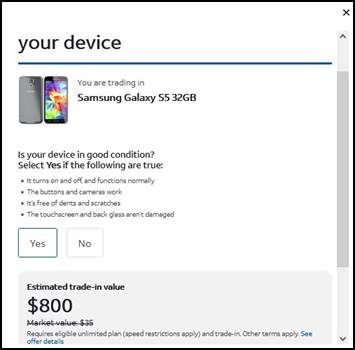 Awesome.  I had an old Galaxy S5 in a drawer somewhere that still worked fine and I used that as a basis to order the trade-in.  It resulted in an $800 credit to the order, making the S22 Ultra in the configuration my son wanted a whopping ~$16 a month for 36 months.  That’s about a $600 purchase (which is what I could likely buy the phone for at a third party – as AT&T routinely more than doubles the price of a new device.  But with the $800 off for the trade-in it seemed much easier to just get the device from the carrier so the number exchange between devices would be simpler.)  I finished up placing the on-line order and got to the shipping screen where they offered two choices, to ship the phone to my house in about a week, or to have it readied for pick-up at a local AT&T store in two hours.  Well, faced with those options, I surely wanted the phone in two hours not seven days.

I chose the store-pick-up and awaited the “ready to pick-up” email I was told I’d be getting any minute.  I received a note about the box they’d be shipping me to send-back the trade-in, but no “ready” email or text.  The next day (Wednesday) still no “ready” email.  Just an additional email about what to do with the box for the return.  I happened to have a doctor’s appointment that day, so from the doctor’s waiting room I used the AT&T app on my iPhone to see what the status of the order was.  When I checked it said “cancelled.”  What???  I used the text chat function in the app to ask the agent what was going on and the agent assured me that the order was in-fact being delivered the next day.  When I asked why it wasn’t ready for pick-up, the agent said he/she couldn’t access the details – only that I’m getting the phone on the 3rd.  Something smelled very fishy.

When I finished at the doctor I called AT&T from my mobile phone on the drive home (I was a passenger) by dialing 611.  I was finally connected to an agent that could help.  He told me that the order was indeed cancelled.  I asked him why.  He explained that “the store didn’t have the phone in stock” which raises all sorts of questions.  Why was I offered the store pick-up as an option if they didn’t have the product?  How can the store outright cancel an on-line order without notice?  OK, never mind I thought, and asked the agent to “just give me the other shipping option.”  He then said he could not “un-cancel” the order.  I’d have to order it all again.  We debated this point for quite a few minutes – again, how can a store – when only asked to be a delivery point of pick-up – cancel an on-line order they weren’t involved in, and do so without notice to me?  Finally, the agent said he’d just put-in a replacement order for me and everything would be the same.  This involved verbally going through everything I had already done on-line, including having him read terms to me, get my credit-card information again, and then sending me an email I had to click through and agree-to.  All redundant as I had done all of it already before the store cancelled the effort.  Once we were done he said he’d asked for the phone to be shipped to me “priority.”  We were all set.

Well, apparently not quite….

The emails I received from AT&T now indicated that my monthly bill was now going up far more than the promised ~$16 bucks a month.  It was now showing higher by about $125 per month.  I had spent more than enough time on the phone about this by then, and my patience was wearing thin, so I sent a tweet to AT&T Help on line: 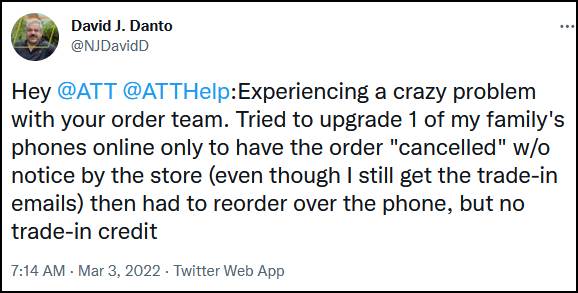 The online agent DM’d back and forth with me for a couple of hours, and called me a few times, assuring me that I’d get the trade-in credit as long as I went to their website and signed-up for a trade in credit.  She warned me NOT to select the ‘send me a box’ option (the one I had already picked two days before) as it was ‘not the most reliable choice.’  Instead, I should ask to have a label printed and just send it back myself.  Armed with this frightening information I followed her instructions and went to the trade-in page to manage that already completed process all over again.  When I did that, I saw the $800 trade-in credit disappeared.  I was now being offered a whopping $35 for the same phone:

When I complained about this to the agent we had the following exchange: 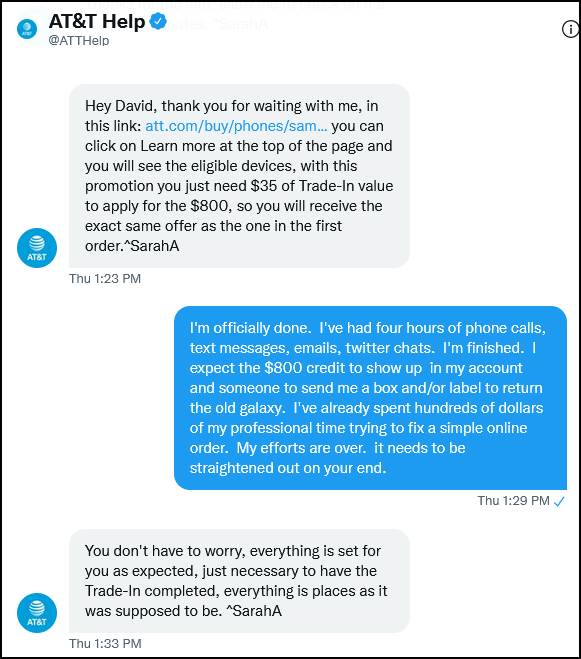 At this point I haven’t re-signed up for the trade in, because as I see it, I did that on the first order and they’re already sending me the return box:

Apparently, every time I speak or chat with someone at AT&T it is as if each one works for a completely different company with completely different information.  The phone arrived yesterday as I type this and we were easily able to activate service on it.  The originally requested return box also arrived, but I worry that it has bar-codes that tie to an order that was cancelled.  I have no idea what they plan on charging me for this replacement at this point, but I clearly plan on charging them my professional engineering rate for every hour I’ve had to engage them to fix their error.  Hopefully the bills will be a wash, because I know if I have to reach-out and touch someone there again it will result in even more days of this insanity.

The moral of this story is either:

Maybe pay more attention to the Verizon and T-Mobile offers in the future.  This AT&T isn’t the same one that created the Bell System and managed the world’s best telecommunications for decades.