This past weekend was the 21st anniversary of the 9/11 attacks on the USA.  I’m not sure how many of you know my story of that day – the non-thrilling, almost close call for me that never was.  I’ll share it below and then reflect on where those terrible events have brought us.

I was going to meet some friends for dinner in Los Angeles the night of 9/11 - flying out of Newark early in the morning. (I was only able to attend that dinner because a meeting I was scheduled to attend at New York’s World Trade Center that day was cancelled/postponed a couple of weeks earlier.)  As those who read my travel blogs know, I’m a frugal traveler –always looking for a bargain.  I had found a great fare to LAX from Miami (something just over $100 as I recall) and that meant I had to fly to Miami to connect to LA.  A weird route, but one that saved hundreds.

My very-early 9/11 flight from EWR to MIA was awesome – I had received an upgrade to first-class, had a nice flight with a great breakfast, and then it was generally quiet till my ‘sky-pager’ started going off.  It was a work colleague asking me if I was OK.  I replied that I was and asked her what was up.  She said “buildings down, bombs going off everywhere, mass chaos.”  Now she and I had worked together at a former job for Mike Bloomberg, who coincidentally was in a New York City Mayoral primary election that day, so I thought she was teasing me about that.  As we got closer to landing, my news-feed pages started coming in on the device and I realized she was not kidding.

When the plane landed the pilot said basically to get our things and leave the airport as soon as possible as “things are strange right now.”  No one from the flight crew said anything other than that, but when we entered the airport it was like a ghost-town.  One convenience store was still open and had a TV on, and people were gathered there to watch the buildings smoldering.

I then learned that a bit earlier many news reporters had said that the only planes left in the air were hijacked – which of course sent my wife into a panic.  As standard for those pre-mobile phone days I went to a payphone when I landed and called her to put her at ease.  It was quite a catharsis for us both.  She explained that she had already contacted a friend of our family who lives in Miami (who also happens to be a pilot) and asked him to get to the airport and “get David out of there if he is still alive.”  My friend did meet me there, and I wound up staying with him at his house for three days.

As no one had any faith in flights returning safely anytime soon, I booked myself a private cabin with a shower on Amtrak’s Silver Service from Miami to Newark.  (One of the many side stories here, Amtrak’s website was ‘broken’ – and I’m being kind here –and I never received the private cabin with the shower – just a tiny private room.  I later disputed the charge and got all my money back as a 9/11 gouge that should never have been.)  I made it home to a teary family hug five days after taking off.

So, what were / are the legacies of that day for me?  First of all, I will never forget nearly three-thousand people that were not as lucky as I was and didn’t make it home five days late … or ever.  It is not something I ever take for granted.  My ‘not-really near misses’ of a meeting scheduled in the WTC that day (but cancelled two weeks earlier) and flying the doomed morning route to LAX from EWR (but going via Miami) were closer than most people, but not really all that close at all.

For another interesting side story, I have a friend who realized that Continental was allowing zero-cost changes to any flights for a period of time, and was also offering $99 flights to domestic locations for the first week or so when flying was back to get people to start traveling again.  So one by one for his full family of eight he booked a flight to LAS for the following week at $99, then called back fifteen minutes later and cancelled it and moved the flight a few months forward to the date and flight he actually wanted, all at no cost.  He booked eight people for a family vacation to Las Vegas for $99 each – again, one at a time.

The 9/11 impacts to flying in general were and are much larger.  First of all, airports are now shut-down for all but travelers.  The days of taking kids to an airline club to watch the planes, or going to one to meet colleagues, are definitely over.  Then, of course, 9/11 brought us the TSA – a total failure of security based upon the assumption that hassling people will provide just enough illusion of security so that the air-transportation industry won’t collapse (as I explained back in 2015.)  We live every day with that awful mistake that wants to pat-down grannies but let’s hidden guns and fake bombs pass through undetected.  In addition, the 9/11 experiences also brought us the first time (in my memory) when airlines asked for a cash handout and the US government just gave it to them with absolutely no strings attached.  They learned that they can always be ‘capitalists during good times and socialists during bad times.’  All this did was increase the greed of their management in a service industry that has conveniently forgotten that it should provide good service.  It also brought us cockpit-door-locks, which was probably the best idea to come out of the crisis.  We had always assumed that giving-in to a hijacker’s demands was the best option for the safety of all.  9/11 taught us that the hijackers may actually be insane and/or religious zealots that are ready to die and kill everyone else in the process, so giving-in was no longer the wisest course of action.

I can only hope that there are people designing better intruder management systems for aircraft of the future that can either take-over the flying of the plane remotely, and/or in extreme cases, use some form of safe knock-out gas (like in Star Trek) to disable the passenger area of a plane while keeping the pilots awake.  However, knowing the greed of the airline industry, I doubt any major changes (that don’t earn the management and investors money) are even a passing thought. 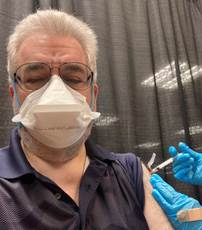 So, as another anniversary of that horrific day passes, I implore you to remember those events and mourn the people and processes we all lost.  Feel the tragedy and heartbreak (that are still raw for so many families) which comes from nearly three-thousand souls needlessly perishing.  Then, realize that COVID19 has already taken over a million Americans and over six and a half million souls worldwide.  That’s over three-thousand 9/11s worth of mostly preventable deaths.  Wear your damn masks and get the vaccine and the new Bivalent boosters ASAP (like I did last week.)