The World Gets A Little Smaller…Again

Unlike what I suppose is the experience of most of you, international travel has always made me feel uncomfortable.   I think part of that comes from not wanting to do anything out of my comfort zone.   For some people ‘different’ is exciting…for me different is uncomfortable.  (At the rental car lot my wife always wants to select a new car to try, and I always want to select a car I’ve driven before so I know where all the controls are.)

I remember my first trip to the UK – many, many, many years ago.  As soon as I landed and walked into Heathrow I felt like a fish out of water.  The signs looked different, the area was unfamiliar, and the vibe was ‘not comfortable.’  Over years of traveling there my experience changed – not just because I’d done it before, but also because of technology.  A lot of my changed perception was because of the improvement in my communications devices.  On one of those subsequent trips, when the 777 touched-down and I began getting my emails again on a Blackberry, suddenly I didn’t feel like I was as disconnected from my life as before.  The world had gotten a lot smaller.  Then, in subsequent years, when I carried a smartphone with GPS maps and international texting, the UK seemed like just another neighboring city in the US.  While the scenery, customs and currency were new, the experience of it wasn’t all that different to traveling domestically.

There’s no question that technology added comfort to my international travel to English speaking countries.  Regrettably, it really hadn’t done anything for me in non-English speaking countries.  (I knew full well after eight years of French language classes that I just didn’t get my dad’s genes for understanding languages other than English – that became painfully obvious many times.)  My email and apps did little to help improve the sense of discomfort and distance when I couldn’t communicate in the native language.  Now, all of that is about to change.

At the recently concluded CES 2018 the concept of universal translators finally became reality.  Instead of non-functional prototypes and pie-in-the-sky promises, I actually experienced working models.

One interesting product – shown in a working prototype – was a set of earbuds that two people can wear to have their conversation simultaneously translated. 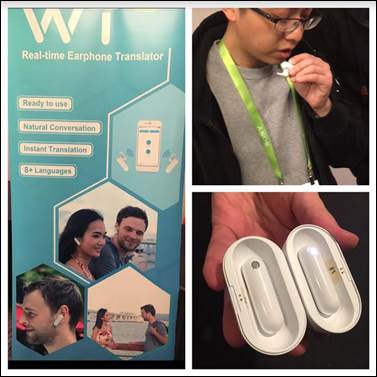 It was a fascinating concept (and a missed opportunity to call the earbuds Bablefish from the Hitchhiker’s Guide) but the applications were limited.  One can’t easily get into a taxi and ask the driver to put on an earbud so you can speak with him.  It also required a smartphone to work.  This idea is really only ideal for two-person extended conversations.

But there was another, more practical product shown at CES.  Meet Travis the Translator. 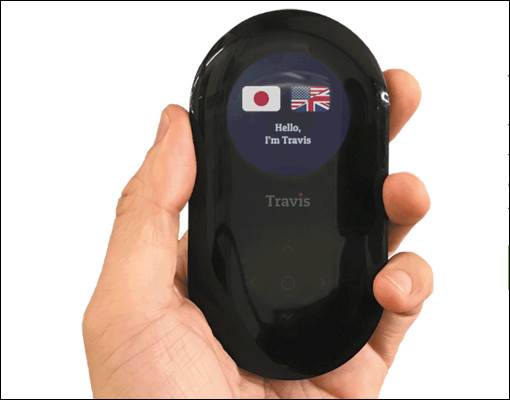 Travis is a handheld device that can translate 80 languages in either direction.  It aggregates the translation capabilities of a number of on-line algorithms through the special sauce in its programming.  One simply has to select the languages on either side, press the button to begin talking into it, and it repeats what you said in the other language.  Below is a demonstration I recorded at CES.  Click the picture to go to YouTube and play the video. 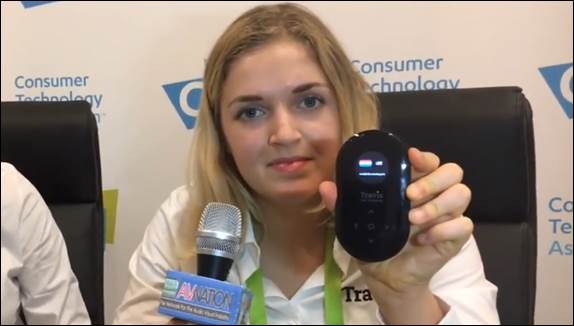 I was floored that this wasn’t a prototype or concept, but rather a real, working device.  And a real, shipping device.  During CES I ordered one of these and have already received it, and it actually works.  (The cynic in me was unconvinced up until testing the production model myself.)

The downside to this device is that it requires an internet connection to work.  (According to the Travis team the device can translate 3 languages while off-line, and not so well.)  The unit can obtain an internet connection by inserting a SIM card from the carrier of your choice, or by connecting it to WiFI (or by tethering it to the WiFi hotspot on your smartphone.  They hinted that it will eventually work via a Bluetooth connection to a smartphone, but I think that’s not realistic at this time – unless they make a companion app.)  That is a significant handicap for this device, as the ideal application is when one is traveling to areas outside of one’s own smartphone data plan.  I want to send it with my wife on her trip to South America next week, but the only realistic option I have for her at this point is turning her iPhone’s hotspot on and tethering the device to that. Lord knows what AT&T will charge for that data usage.  Frequent international travelers should obviously get the unit its own international data SIM.

The upside is phenomenal.  One can now walk into any store and up to any person with a pre-recorded question, press the unit to play it, and set it to translate the response.  It takes a bit of nimble finger pressing to do that, but one can get good at it pretty easily.   Longer form conversations are more difficult of course, as the unit can ingest and translate bursts of words that top-out at about two sentences long.  Still, for the international business traveler that can only speak their native language, this device provides a crutch that increases one’s comfort zone immensely.  With an approximate $200 US price-tag, it’s well worth the investment.

Eventually, I’m sure this technology will be incorporated into other apps, videoconferencing systems, contact center systems, kiosks, ATMs, you name it as the sky is literally the limit.   It will also eventually enable small businesses everywhere to expand their abilities to do business globally.  For now though, I think of it like that first Blackberry I had when landing at Heathrow suddenly didn’t seem like as big a deal as it had before.  The world has again just gotten a little bit smaller.