‘Polaris-izing’ –or- The Tale Of Two Airlines

In my last business travel blog I explained how United Airlines’ recent moves essentially eliminated the Platinum elite level.  What I didn’t fully explain is that this is only one small part of a larger picture.  United is now both a high-end international / trans-con luxury carrier, and also a poor excuse for a modern, domestic carrier.  The gap is as great as it has ever been, and it is getting much larger.

From a passenger-segmentation standpoint, the growing divide is obvious.  In addition to virtually eliminating the Platinum Elite level as I explained in the last blog, United has made a number of changes to the requirements to reach the 1K (100,000 miles a year) level.  Firstly, they’ve raised the required spend to reach 1K from $12,000 to $15,000 (in addition to flying the miles of course.)  Next, they’ve also dropped the previously double miles earned on the least expensive premium tickets (“P” class) to now 1.5 miles earned.  These moves are meant to make fewer people qualify for the top tier, and make achieving that level even more dependent on how much money you spend and not how much flying you do.

The bottom line is United wants customers that spend a lot of money.  I get that.  I don’t like it, but there’s nothing inherently wrong with it.  The problem is that the lack of competition for non-stop domestic flights has allowed United (and other US carriers) to drastically diminish the passenger experience for those passengers that aren’t flying on the most expensive routes and tickets.  It’s “Robbing Peter To Pay Polaris” as Joe Brancatelli helped me formulate the quote a few months ago.

If one has purchased a First Class ticket from Newark to Europe or Asia, and one does that frequently, one is likely to be admitted into United’s Global Services tier.  (Also, if one is a “C” suite executive at a large business one is also likely to have had Global Services gifted to them for free – which is another enormous problem, but not the focus of this blog.)  When this extravagant traveler arrives at Newark he or she enters a completely separate Global Services check-in lounge.  He or she is then allowed to use a hidden lounge exit that lets them go to the front of the security line.  They are then allowed to use the newest United Club at Newark (stolen from paying club members without refund or compensation) until it’s time for their flight.  It’s a gloriously uncomplicated and pampered experience.

If, however, one is just a lowly silver, gold or platinum elite flyer on a domestic trip, it is truly a tale of two airlines.  That is my personal experience and the experience of the numeric majority of United’s customers.

If I have Pre-Check it means almost nothing if I’m departing Terminal C, because the lines often wrap around longer than the regular security line.  If I’m Pre-Check and departing from Terminal A, it means absolutely nothing.  Despite years of opportunity, United and the TSA still haven’t added a Pre-Check line at Terminal A.

The Continuously Crappy Experience of Flying Out of EWR Terminal A

If I’m departing from Terminal C, and I’m a United Club member, I experience a shadow of what I once had.  Since the newest club was stolen from paying club members and designated as Polaris only, the remaining club has had all of the comfortable seating removed, and is always far over capacity.  I covered that in detail in a past blog, so I won’t re-hash it here, but I will add that at a recent visit I was given a moist towelette by United staff, passing them out like product hawkers on a street corner – an obvious acknowledgement that the bathrooms are inadequate at these supposedly premium locations – which cost members upwards of $450 a year.  (That buys a lot of moist towelettes.)  Airport clubs are supposed to be a place where one can go to go to relax and get work done – because they are better than the terminal seating experience.  With stackable plastic chairs, inadequate awful food, overcrowding and inadequate, dated bathrooms, the Newark clubs are no longer better than the terminal experience – and in many cases they are worse.  What’s the point of paying for membership?  (Chase Bank is complicit in this sham as well, still offering a “Club Card” to New York/New Jersey members without reducing its price commensurate with the drastically reduced EWR experience.) 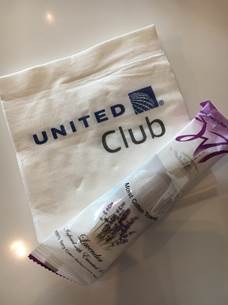 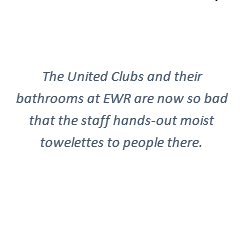 The gap between the Global Services international/premium flying experience and the domestic experience is enormous and growing larger every day.  United – and the other airlines as well – feel there is no reason to improve the day-to-day experience of their domestic travelers, as deregulation and mergers have created an environment where there is virtually no competition at many US airports.  I’ve blogged about that before, and when I did people accused me of exaggerating how bad it was.  Let me tell you about my flight experience this past weekend as just one example.

My wife and I attended a family party in Greensboro, North Carolina.  Our experience getting into Newark Terminal A was as described above – no Pre-Check, long lines, etc.  Ironically, the United Club in Terminal A – historically the bastard stepchild of the good clubs in C – is likely now the best United Club experience at the airport.   We boarded the United Express RJ-145 and had a relatively smooth flight to Greensboro (GSO – Piedmont Triad International Airport.)   GSO is a tiny, little nothing of an airport that provides a slam-dunk excellent passenger experience that should embarrass anyone connected with the large New York area airports.  A fully-staffed Pre-Check lane with zero hassles getting through, plenty of comfortable seating room and dining options, no kiosks or free-standing stores in the middle of walkways, etc.  We boarded our flight home on-time (despite a rapid turn-around on a late plane) and took off for EWR within 10 minutes of the planned departure.  We landed about ten minutes late.  The gate was C130x.  Many of the passengers – including me – were happy to be landing at Terminal C and not Terminal A, as that would help with tight connections.  It was my first experience at this travesty of a gate.  Now I know better.

C130x is a tarmac landing gate.  They roll stairs up to the plane and make you wait for gate checked bags outside on the airport grounds.  OK, it’s stupid to have to deal with that kind of throwback at an airline’s home hub in 2018 (especially in light of the Jetway and pleasant experience at the dinky GSO we just came from) but no big deal.  I fly to a few airports on these stinking RJs that still have tarmac departures, and it’s not that much of an issue – walk down the stairs, get your bag and go.  However, never put it past United to make a big mess out of any situation when they have the chance.  There was no entrance to the terminal from gate 130x.  Apparently, no one bothered to blast a hole in the wall and add some stairs.  The plan – which no one told the passengers until we deplaned – is to wait for and get the gate checked bags, then board a bus to the terminal.

First we were admonished to “get into a single-file line” to wait for bags.  Then, once that mess was finally over, we had to head to the bus.  Naturally, everyone onboard needed to get to the terminal ASAP, so everyone crowded onto the bus – which was never made to hold that many people.  We were already very late due to the wait for bags and the time it took to stuff everyone into the too-small bus.  The bus then proceeded to give us a tour of the underbelly of Newark Airport – past the garage, the garbage dumps, the mechanical entrances, etc. – bumping and jostling the people tumbling into each other all the way.  When you land in an airplane they always tell you to stay seated and keep your seatbelts fastened ‘till you come to a complete stop at the gate because you’re on an active airport tarmac.  But, apparently, they can use grease and a plunger to stuff you onto a bus that is too small – where you have to stand and try to hold on for dear life – as you ride around that very same tarmac.  (How the DOT and FAA allows United to get away with that is beyond me.)  The bus then takes the passengers to the absolute polar opposite side of Terminal C – Gate 70 – at which point the United staff has the gall to shout at the late and exasperated passengers to “hurry-up.”  A number of the late passengers replied with “how dare you” comments.   Quoting my wife on the experience, “It’s hard to describe how degrading it all was.  The absolute lack of courtesy and care was just astounding.  Out treatment felt as if we were prisoners going to jail, not paying customers receiving a rather expensive service.  How dare they treat customers this way, especially at their hub airport.  We weren’t criminals, we were people just trying to catch a connecting flight or get home.  How does anyone who made the decision to implement this process look at themselves in the mirror?”

I think it’s pretty safe to say this was not exactly the ‘tea and crumpets’ of the Polaris service to Europe.  Before anyone tries to excuse this by saying it’s not really United, but a different carrier marketed as United Express – yes, but that’s the aircraft experience.  The airport configuration, ground staff, etc. – that’s all United.  This is a planned process that someone approved.  ‘Why does it need to be better’ they must have presumed, ‘it’s not like it’s our high-paying customers.’

I’m perfectly clear that this isn’t a being dragged off the plane and beat bloody experience – most of the daily pain from United doesn’t rise to that level.  “Death by a thousand pinpricks - just a series of unnecessary indignities that make passengers dread getting on airplanes” is what I called it before, and it is now worse than ever.   If you’re not dumping thousands of bucks per flight to go to exotic international destinations, United – with everything they do – is saying you’re the lowest, worthless scum that deserves the bare minimum treatment.  Unless there is some change in airline regulations, I’m sure they will continue to be a tale of two airlines, and they will continue to explore just how low the non-international, non-premium service can be distanced from the top.  We’ll all continue to be Polaris-ized.