Year Of United Hell Freezes Over 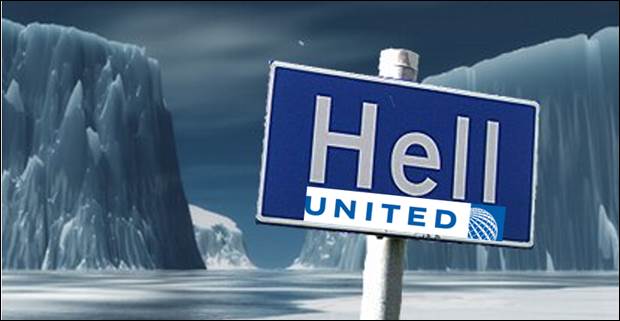 Yes, Hell has frozen over, dogs and cats are dancing in the streets, liberals are hugging conservatives….it happened.  On August 28th, into my 30th or so RT on United Airlines this year I finally had an uneventful trip.  We boarded on-time, left early, everything worked, we landed early, and, with this being one of the rare flights where I actually had to check a bag, even that came out rapidly at EWR.  The zero for 2017 streak I’ve written and tweeted about is finally broken – a few days short of September.  It took United nine months to deliver the most basic of services to me in 2017 – getting me somewhere on-time and both drama and hassle free.

Before I could celebrate however, United had to give me one last series of whammies on the outbound flight.

My wife and I were flying Premium Service from EWR to SFO for a much needed weekend getaway.  We were scheduled to fly in the newly configured Polaris cabin of a 777-300.  This configuration puts 60 business class seats on the aircraft – which meant we had a decent chance of getting an upgrade with our Regional certs.  Even though my wife and I were traveling on the same record with a single payment, we both have the same status, and we both had the requests on our reservation, United inexplicably split the record and upgraded only me.  It took a few calls to fix that (but the record was never recombined.)    We both finally received the upgrade.

The aircraft we were going to fly came in from TLV with no issues, landing at EWR at about 4am.  Then United stepped into one of my big issues with them.  No one looked at the plane until it was prepped for boarding at about 7am.  At that point they discovered a “dent” in it.  Could it have been fixed in time if it was caught when it landed?  Possibly, but that’s just not how United works.  They don’t inspect the aircraft until it’s actually needed, when any repairs have to happen on the passengers’ time.  After about an hour it was determined that it couldn’t be repaired rapidly.  Astonishingly, another 777-300 was available – as it was parked at EWR to be used for a United video recording.  It was announced that operations decided to swap aircraft, the new one was ready, and it was boarding at gate 126.  Everyone ran to gate 126 and indeed it was already boarding – a flight to Chicago.  A couple of dozen people tried to board that flight before an announcement was made that 126 was “wrong” and the new gate would be 125.  After the aircraft was finally brought around, catered, and had cargo and bags loaded, we left about two hours late.

This was our first Polaris experience.  The mini-suites are very nice – with a great use of room and space, but the seats themselves are really almost identical to the old lay-flat business first seats.  An opportunity to improve the operation, padding or other comfort factors was clearly missed.  Add to that the tray table – that slides under the display and is supposed to latch closed – didn’t do that on one of our two seats.  Half a year and these Polaris suites are already breaking.

All of the problems detailed above were preventable (if United had their act together on maintenance and operations) but they were not intentional.  When we landed (and even though there were gates available) the captain announced that we had to wait for the one (currently in use) that this aircraft was designated to take off from on its next route. 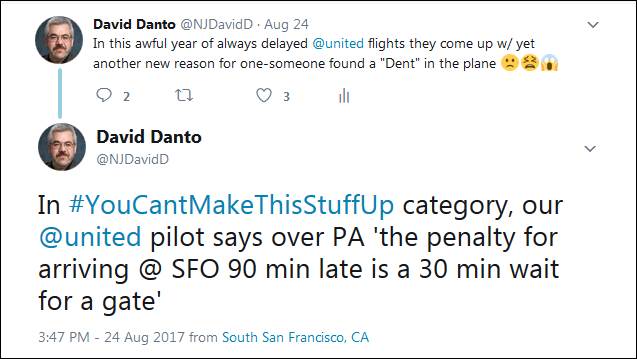 The passengers were rightfully livid.  We were already late – some had tight connections to make – and United choose to keep us parked on the tarmac so they wouldn’t have to either tow the plane where it was needed later or simply change the next flight’s departure gate.  If that isn’t the clearest indication of process and policies that are out of touch with a service industry’s mission than I don’t know what is.  We ended up deplaning three hours late.  That is United’s idea of their flagship Premium Service.  As Joe Brancatelli put it, “United is a failure on every conceivable level. Passengers hate it. Employees hate it. It is a financial laggard, an operational black hole and the competitor with the worst reputation in a universally loathed industry.”

The above was our outbound experience.  The return flight, scheduled for four days later, was on one of the older PS configured 757s…and the flight was stunningly fine.  It was my first uneventful, drama-free, on-time flight of 2017.  This was also the first PS flight I experienced since United reinstated hot meals for Economy Plus passengers late in July.  Also stunningly, the meal was very good.  The Manicotti with sides - fruit and a small piece of cheesecake - was superior to some of the domestic First Class meals I’ve been offered this year (inedible spicy Paella anyone?).

Now before I start handing out medals to Oscar and team, some recognition of the situation is in order.  My flight from SFO to EWR was on August 28th – when the Houston area was deep in the middle of the devastating Hurricane Harvey.  The human and financial tragedy that has hit that area is incalculable and will be with us for years to come.  I strongly suggest donating supplies, time and/or money to the people struggling in the area.  (As was reported in this series of tweets, the Red Cross probably shouldn’t be amongst your choices of organizations to support.  Please look around for alternates, but do support the recovery if you can.)  Obviously, during the heart of the storm, the huge United hub at IAH was not operating.  I’m not sure exactly how many United flights that situation kept out of the air, but my guess would be at least 1/4 to 1/3 of scheduled flights were grounded.  Perhaps, with the shedding of such a significant load, United operations was better able to handle scheduling and landing the flights in the air.  The ground crew at EWR was clearly less occupied than usual and was able to pull bags off this flight much faster than the norm.

Thinking about it, we may have inadvertently found a solution to United’s problems.  Perhaps, if they were to shed some load on a regular basis it would provide a better and more reliable experience.  That concept leads us to a novel idea.  What if United were to break itself up into two airlines?  One could be a primarily domestic carrier – operating from Newark, Houston and Cleveland with a handful of international flights.  The other could be a primarily west-coast and international carrier – operating from LA, San Francisco and Denver with a small hub in DC for connections.  I bet, with each having a smaller and more manageable load, the performance and customer experience would immensely improve.