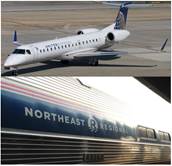 As happens every once in a while, I got a call on my mobile phone and was asked to go to Washington D.C.   Not to deal with the government (despite my attempt at humor in the title of this blog) but to make a presentation to a potential client there.  I did a quick check on the United app on my smartphone and found the roundtrip fare from my home airport (icky Newark) was around $400, so I quickly agreed to go.  I figured I’d be able to buy the ticket the next day, after I received a full briefing about the meeting.  Well, that was stupid.  The next day put the potential travel at seven days out, and the fare doubled.  I couldn’t back out of going at that point, and I couldn’t take the train and be on-time for the morning meeting, so I ended up buying a one way ticket to DCA and buying an Amtrak ticket back.  As inconvenient as that split day-trip would be, I figured it would give me an opportunity to compare the two experiences first hand (both of which I’d done many times before, but not often in the same trip.)

At 4am, the drive to EWR from my house takes 10 minutes on the interstate.  It was a breeze getting there.  Once I arrived, the breeze ended.  My flight to DCA was on a typical United Express RJ145 (the plane who’s interior room I’ve often compared unfavorably to Barbie’s Dream Jet.)  This flight, like most United Express flights, departed from Terminal A – the bastard stepchild of EWR.  United’s A concourse has been neglected for years, with United blaming the Port Authority, and visa-versa.  I was happy to have found (in my first flight out of there for a couple of months) that the renovations that were finally underway look like they are now done.  The gate area has a new Terrazzo floor and new chairs (many with power ports.)  A closer look at the chairs shows that they are branded “United” – which leads me to further believe that all the past “blame the Port Authority” responses were just more airline lies. 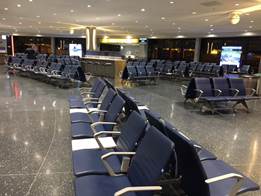 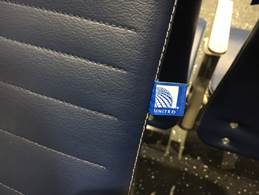 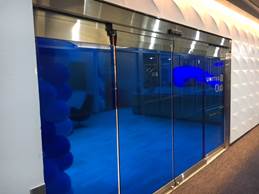 I also noticed the club I reported as closed for renovations two months ago looked like it was now completed.  Of course, I say “looked-like” as it was again closed.  Its listed opening time isn’t until 3 minutes before the early morning flights board.  Why have a club if it can’t be used for the first-of-the morning flights, specifically when it would be needed?  (Another pro-rated club-fee refund I deserve and

won’t be getting.  I did visit the club in DC when I landed, and it was very nice, but it sported the smallest bagels I’ve ever seen.  In fact, if you take a look at the picture to the right for perspective, it’d probably be more accurate to call them big, soft Cheerios.)  The flight down was quick and uneventful.  I can’t say painless as the seats on the RJ are actually quite painful.  Still no WiFi on this aircraft / route of course.  My overall observation: a very dated, overpriced experience made more bearable because of how quick the flight is.

In order to make the train part of the trip – the return journey – work, I’d have to take the train back to the Newark airport rail station.  This way I could park at EWR all day and just take my car home.  This meant that I could not take the faster Acela train, as that doesn’t stop at Newark Airport.  You’d think that an international airport would qualify as a major hub, but not in New Jersey of course.  In mid New Jersey the Acela only stops at MetroPark (essentially a big parking lot in the middle of nowhere on the edge of Edison/Islen) and Newark Penn Station, where no one in their right mind would want to drive to.  So I booked the slower Northeast Regional train that was departing Union Station at about 4pm and getting to EWR at about 7pm.  I purposely paid a bit extra for the business class seat, as that ticket is more flexible and I’d be able to change to an earlier train more easily if needed – or so I thought.  Because when I tried to do that, the Amtrak agent said that it was the business class fare, but the AAA discounted business class fare, and that would require a $70 upcharge to change.  “No thanks” I replied.  I just went into the Acela lounge (one additional benefit of United Club Membership) and got some work done while I waited.

The Acela lounge at Union Station reminds me of some third world airports I’ve visited: worn carpeting and upholstery, mildew smell in the air, holes in the wall covered over with spackle and no attempt to paint or finish it, etc.  Basically, it’s like the United gates at LaGuardia today, or how the Newark terminal A gates used to look.  In the afternoons, you

can take free Goldfish crackers or Rold Gold pretzels to your heart’s content (which puts current United Clubs to shame in this one area, as Smisek’s penny-pinching abandoned name brand packaged snacks that travelers could take with them years ago.) But, that’s all you get.  No other food.  The drink selections are a self-help soda machine and small bottles of purified water.  I was able to sit in relative peace and get two hours of work in (including beginning this blog) but it was difficult, as the WiFi in this club is next to useless.

Boarding the train is NOTHING like boarding a plane.  The benefits of flying are that you have a reserved seat and you know what to expect from it.  On the train there is a mad dash to get a good seat (or spread out if you can so no one will sit next to you.)  But that’s where the un-favorable comparison to air travel boarding ends.  On the train – there is no TSA.  There is no body-scan.  There is no grope-fest.  You get on – period.  That eliminates the hassles and speeds the process up immensely.  Of course, it’s probably only a matter of time before some idiot will realize Amtrak is a soft target and security eventually is stepped-up, but for now it is a pleasure.

When I did board the train, I of course experienced large, soft comfortable seats, plenty of legroom, room for all the luggage I might need to carry, and of course access to

cellular service to make calls and get data services.  They do offer Amtrak Connect on-board WiFi, but on the trains - as opposed to in the club - the service isn’t next to useless, it is useless (as one can tell by making an attempt to connect to it and seeing the list of all the personal hot-spots in use.)  I of course used my T-Mobile hotspot too after confirming that the Amtrak signal was as bad as I remembered.  It’s really hard to understand how typically poor airplane WiFi can still be better than the service on a ground based train.

One of the nice things about being on the train - which everyone always talks about - is that there is plenty of room to take out a computer and get work done.  While I agree there is room, it’s honestly like working during an earthquake.  For example, I had to retype this sentence about five times to get it right.  All the bounces and shimmies make getting real work done problematic.  I can do it if I have to, but if I didn’t editt thsse sentencee after typing it this iss what it wpoudl have looked lile.  I just can’t concentrate very well when I’m always stopping to correct.

The major downside of taking the train is that it takes the 25 minutes one would be up in the air and turns it into a two and a half hour loooooong, dragged-out journey.  Yes, the lack of hassle makes up for some of it, but boy it’s hard to endure at the end of a day when you woke-up before dawn to catch a flight.

So the bottom line is I’ll still fly when the price is reasonable, and still take the train when it isn’t.  Honestly, neither service could objectively be rated as great, and for the hundreds of bucks they cost one of them should be.  I’m only thankful for the fact that there is an alternative available when one or the other is having a bad day.