Time To Cut The Cards 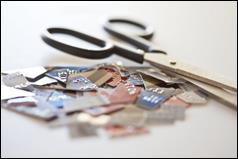 The old expression goes “Fool me once, shame on you – fool me twice, shame on me.”   Never has that expression been more appropriate than with the US airline industry as it exists today.  The airlines promise benefits but deliver them so rarely that the majority of frequent travelers never believe them anyway.  I’ve previously detailed how tenuous the state of airline “loyalty” programs are, but now the time has come to call out and rally against the shell game of frequent flyer miles.

Let’s look at this in the abstract.  Say I open a grocery store in your neighborhood.  I carry canned vegetables.  They cost $10 a can.  I’ll give you a dime in my own invented “Can Currency” every time you buy my products in my store.  When you get to $10 in currency, you can get a free can.  It costs me a little money, but it keeps you shopping in my store and increases your loyalty to my business, boosting my bottom line.  That’s fair, accountable, and all makes sense.  But then, let’s say I sell the store to a new owner.  That new owner pulls some tricky stunts:

·       Instead of selling you the can for $10 worth of Can Currency the owner says that the number of cans that will cost $10 in Can Currency are limited, and only available at days and times of his choosing.  The rest of the time the cans will cost $20 in Can Currency.  There is no governance or independent review of how many actual $10 cans there are – it’s totally up to the whim of the owner.

·       The owner sells Can Currency to a local bank - for a fraction of a penny for each dime’s worth – and the bank offers you a credit card that gives you more Can Currency than you can get from shopping in the store.

Would any sane person play this shell game?  While the obvious answer is no, this is exactly what we’re doing with the major US airlines.  We let them create their own currency, and let them devalue it on both ends.  They increase the prices of what their product will cost when you use their currency - whenever they feel like it, they change the formula of giving you currency - whenever they feel like it, and they limit the number redemptions to some hidden amount - completely at their whim.  It’s no better than a rigged street con-game.  The time has come to admit that with this game “the only winning move is not to play.”

With the latest announcement from United that they’re changing the rules of their particular shell game, even after playing for millions of miles worth, I’ve decided to quit the game.  I’ve had enough.  There are plenty of credit cards available for use that pay you cash back instead of miles.  Even in these uncertain times, the value of US cash has quite a bit more governance than the value of frequent flyer miles.  I’m getting off the mileage bandwagon.  If you use these credit cards - affiliated with any US airlines that are drastically devaluing their “loyalty” programs - you should quit the shell game too.  We can’t stop flying, but we can stop rewarding the airlines by buying their currency.

I’m not sure which of the cash back cards I’m going to do the majority of my spending on yet (I’ll be sure to let everyone know which one I pick)  but for now, I’m happy to share the note I’m sending to my bank about no longer using their co-branded card.  Feel free to copy and use as well:

Your financial services organization offers a co-branded credit card with [name of airline] that I have used for years.  This is a note to let you know that I’m no longer going to continue using that card.  Your airline partner has lost you a banking customer.  The reasons for this should be clear:

·       [The airline] touts benefits for cardholders that are often not provided / honored.  These include preferential treatment, preferential pricing, club access, and similar perks.  [The airline] reserves the right to change these offerings as they desire, and I have tried to use one or more of them when they weren’t honored by [the airline] breaking the spirit of the promise.

·       [The airline] continually devalues the buying power of their ‘frequent flyer miles” at their whim.  Recently, after increasing the cost of mileage awards, [the airline] has announced they are not even going to set a fixed amount of miles for most awards – they’ll continuously change them, again at their whim.

·       [The airline] promises to offer lower cost redemption awards, but just about every time I’ve tried to obtain one of those lower cost awards they were unavailable.

·       [The airline] is subject to no external governance or independent monitoring of these programs.  It has continually asserted its right (publically and in the courts) to make whatever changes it feels like whenever it feels like.  Only a fool would see value in benefits and ‘mileage currency’ that this airline has shown – and said – they won’t stand behind.

Please treat this as notice that I will no longer be using this card.  Please inform [your partner airline] that it is their fault that you have lost a customer today.

It’s clearly now time to quit the shell game.  I hope enough of us frequent travelers realize this and act.  Only by not playing the game will the banks stop buying the miles and being the shills in the con-game, and hopefully as a result, the airlines stop making us all the marks.